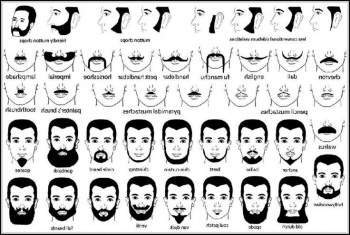 The Fashion trends change every year. What rocked this year may not have audience next year. Hottest beard styles. Different beard styles and their names.

In recent times, not only Women but also men try to look fashionable by changing their appearance. One latest trend in the men’s fashion world is growing facial hair.

Men are trying to experiment different styles of beard that suits their face. Even the girls started admiring men with beards these days, thanks to the Hollywood celebrities who made it a trend.

For any human being, hair is one of the most essential things, in order to look good. Not having hair at appropriate places won’t make you attractive and may embarrass you at many occasions.

That being said, even if you have enough hair on your head, you’ll still look unattractive if you don’t flaunt a clumsy beard. A proper beard maintenance along with a stylish hair style will make a man more attractive. It is always suggested to groom it in order to present yourself good in front of others.

A lot of times, men look more attractive with a beard, may be because of the rugged look it gives your face. So, if you want to maximize your appearance in front of your GF, it is better you grow a beard immediately and style it according to the size and shape of your face.

If you want others to consider you as the manliest of men, then a full beard is what you need to grow. The style gives you a classy touch when groomed and rugged when it’s left untouched. Since it requires very less maintenance compared to the other styles, it is unarguably the most popular beard style of all. This style suits men of all ages, especially those with large/muscular body frame.

This beard style is considered as the trendiest in the list. The ‘Designer Stubble’ aka ‘Five O’clock Shadow’ became popular in the 1980s. It was later followed by the youngsters after George Michael sported it. You need to grow a short beard that is aimed to affect a rugged masculine. Men between teenage to 25 or college going guys usually try this style and it suits them good too.

This is another hottest beard style that is downright artsy. It consists of a short, pointy mustache and pointy beard, but with no hair on the sides of the face. It requires regular maintenance. The Van Dyke beard suits the old men, but everyone can give it a try. Hugh Jackman has sported this beard in the movie ‘PAN’.

Although it makes you look very rough, you need special skills to maintain this hipster beard. It looks best with a particular hairstyle combination where in you shouldn’t grow a ‘neck beard’. Few enthusiasts also trim the hair around the mouth (moustache). The original hipsters usually grow a handlebar mustache to make it look trendier.

In order to grow a professional beard style, you should first need to grow a full beard and then trim it in such a way that the hair is kept shorter and the lines are shaped tighter. This facial hairstyle is suitable for men between 25 to 35 years of age.

This particular style became popular after Johnny Depp sported it for the role of Captain Jack Sparrow in the movie ‘Pirates of the Caribbean’. It is a blend of soul patch, mustache and goatee-like whiskers. This style suits men between 18 to 35 with lean body frame.

A few more cool facial hairstyles you can consider.

The mustache wax is useful, especially in maintaining the strength (stiffness) of the hair around the mouth.

That’s all friends! The above are the hottest beard styles for men in 2017. So, which is your favorite facial hairstyle of all. Do comment below.

There are no comments for this post "25+ Hottest Trending Beard Styles for Men in 2018". Be the first to comment...

There are no comments for this post "Different beard styles and their names. 25+ Hottest Trending Beard Styles for Men in 2018". Be the first to comment...