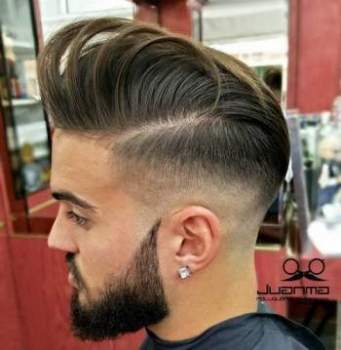 I love combing through old photos of celebrities, looking at the way they evolved from a 20-something heartthrob to a bonafide Hollywood star. Along the way, you get weird haircuts, curious goatees, a gelled tip or two, but also lots of strides. Latest hair and beard styles 2016.

Ryan Reynolds gives good grooming timeline. While he’s not as adventurous with his hair as Brad Pitt or as beard-curious as Bradley Cooper, Reynolds has played things closer to home—a lot like Idris Elba —in that he’s refined himself these past two decades with slight variations of the same thing. He knows that his hair’s natural texture holds a lot of potential, whether cropped short or slicked back. He’s not one to sport a bushy Wildman beard like Cooper, but he’s tried everything on a two-month beard spectrum, and with aplomb.

Sans timeline, it’s often hard distinguish old Reynolds (as in, young Reynolds) with the modern day one. He’s barely aging, never mind that he’s been in the public eye for half his life. (And the first photo aside.)

So, walk with me through 21 years of Ryan Reynolds’ grooming evolution, and take note of how he experiments within certain bounds—it’s always ready for work, but rarely disheveled and unkempt. We're going to start with a few of the more painful late 90s mishaps. Listen, they happened to everyone. Then we'll progress into the aughts with some examples of hair and beard grooming worth emulating if you're going for the friendly-guy-next-door-who-bangs-your-sister vibe. Finally, in more recent years, Reynolds has been on an unimpeachable tear of essentially flawless personal grooming style. We'll include some tips on how to poach his technique.

Reynolds debuted as a fresh-faced, gel-haired 21-year old. Take away the mullet-like hair flips in the backside and the mischievous teen vibes, and it might be possible to pull of something like this these days. We don't recommend trying.

OK, don't do this, either. I’m including this photo so you can see how far he's come, since the guy is debonair now. I suspect he’d laugh off his brillo chin and ringer v-neck, too. As for the hair, it’s not terrible, except one thing: I’d just tamp the sides down a bit. Keep the texture and volume high on the top, but not on the sides. Have your barber layer it a bit, then comb the sides back with some extra gel applied to damp hair, blown dry.

Here’s Reynolds at the premiere of a movie called Beautiful that came and went. The hair is pretty bad: It’s flattering on him—but only because he's rakishly handsome. He’s got that “I wore a cap all week” hair flip on the sides. But it is all forgiven.

Here’s the A-lister in bloom. Layered, swept (and combed back!) sides, with definition and shine up top. While gel worked better with the curlier 1997 look, this one would benefit with a modern upgrade… forming paste should do the trick, applied damp and combed back, then air-dried.

Van Wilder! 2002 was the year Reynolds’ star rose, and it’s also of the era of… this track-jacket, patchy-jeans, gelled-tips style. Nothing to mimic here, so let’s remember his TRL appearance with co-star Tara Reid as a time capsule, not a grooming lesson.

Jump ahead two years, and we’ve got a less crunchy, less gelled Reynolds. His stylist probably applied a lightweight cream to the sides, blown dry, and something more pliable up top, like a fiber, applied at the roots, tousled, and locked in with hair spray.

This is my favorite Reynolds yet, if only because it was a departure from his teenie-bopper comfort zone. His beard (finally on full display) is trimmed neat, and he’s got a lightweight, controlled-but-defined coif. If you mimic this—and you should—style it with cream, maybe a pinch of oil in there too (beard oil works just as well), then blow it dry.

Reynolds is serving fashion-pilot realness here, and his swooshy hair is a personal grooming milestone. It’s similar to 2005, with heavier-hold, light shine product (like hard cream pomade, air-dried and with a wisp pulled down for dramatic effect.

This is hybrid Reynolds: The same hair from 1997, with some neat facial hair. Here he is at the 2007 Teen Choice Awards with Nikki Blonksy from the movie Hairspray. To get this look use some curl-defining mousse to tame fly-aways while accentuating the natural texture.

This was the first glimpse of the Reynolds we know and recognize today: cleaned up mug, trimmed sides, plus short, texturized hair up top. You can get this with a blow dryer, followed by some fiber for volume.

He was our cover star in 2010, with a grown-out version of the 2008 look above. Note that, even though it’s grown out, it’s still trimmed and styled. (Don’t let this be your permission to avoid a haircut for 2 months.) The sides are barbered, there’s no poofing where the top meets the sides, and it’s still combed and texturized. If his 2008 style is your starting point and you want to grow your hair out (say, past your ears), this is what it should look like along the way—cleaned up, and intentional.

Let your gray stubble show, guys. (It’s the only indication we have that Reynolds is aging. He’s probably got a good anti-aging regimen ).

He’s really hit his stride now: Here is Reynolds, with wife Blake Lively, and with a helluva nice Ivy League crew cut + neat beard combo. You can get this look by styling with cream, combing back, and blowing it dry.

Reynolds covered GQ twice in two years, first with a more high-and-tight, texturized cut, then with a more polished version of his aforementioned 2014 masterpiece look. For the former, style it dry with a wax, and the latter styled wet with texturizing cream.

This guy doesn’t age. Twenty years after his debut, Reynolds looks every bit as fresh-faced as his younger self. Kudos to the then 40-year-old going for this connected undercut-like style. (It looks a little more Ivy league, head on.) I like this side angle because you can see his hairline, while strong, is still recessed like anyone in that age bracket. (There’s the proof that this isn’t 2001.) By keeping some length up top, he can mask the recession, as slight as it may be, while still opting for something outside his usual repertoire.

No new lessons here. Just a man who has taken time to experiment with different hair styles and different facial hair lengths, and now knowing what works best. He looks outstanding.

Take a page out of this man's book!

There are no comments for this post "Steal All Your Grooming Tricks from Ryan Reynolds, GQ". Be the first to comment...