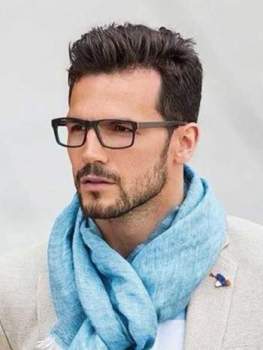 Charles Darwin had a grand white beard; Alfred Lord Tennyson had a fine mustache above his grizzled chin; Charles Dickens had his signature “door knocker” whiskers; Dante Gabriel Rossetti had a bushy goatee; and Caspar David Friedrich had rather wild mutton chops. Just about every Victorian man in Great Britain, and many in the United States, had elaborate facial hair, with even Prince Albert maintaining a neat mustache. Why were beards such a popular male facial hair style in the 19th century, and why are our pop culture icons and political leaders mostly clean-shaven now?

One factor that’s explored in The Age of the Beard: Putting on a Brave Face in Victorian Britain at the Florence Nightingale Museum in London is the Crimean War of 1853–56. Florence Nightingale got her “Lady with the Lamp” nickname through her tending to wounded Crimean War soldiers by night, and when those soldiers returned home with their regal, manly manes, they contributed to a new enthusiasm for beards in the UK.

“The exhibition looks at the range of different facial hair styles in the Victorian period, and the meanings that they could carry,” University of Exeter historian Dr. Alun Withey, curator of The Age of the Beard, told Hyperallergic. “For example, there are portraits of heavily bearded soldiers in the Crimean War, who were some of the main heroes and role models for men in that period, and in fact partly sparked the 19th-century beard movement. We’ve got some of the more unusual styles — like the chin-strap and Dundreary whiskers — which show how there was no single beard style in the Victorian period, and how it evolved into lots of different looks.”

The Age of the Beard uses 19th-century photographs to explore these looks, from the flamboyant to the dignified. The era, with its snake oils and tonics, also saw plenty of potions for beard growth and coloring, as well as false beards and mustaches — sometimes made from goat hair — for those baby-faced gents unable to grow their own. And it wasn’t only for aesthetics; with the bad air of the Industrial Revolution, beards were seen as pollution-strainers.

Officers of the 71st Highlanders in the Crimean War (photo by Roger Fenton, via Sotheby’s/Wikimedia )

The exhibition follows Withey’s Wellcome Fund-supported research project, “Do beards matter? Facial hair, health, and hygiene in Britain, c 1700–1918,” which considered this changing context. While the arrival of the disposable razor, and later soldiers in World War I needing to shave in order to wear their gas masks, the prominence of the British and American beard receded. Nevertheless, Withey doesn’t see the recent resurgence of beards as a niche, hipster choice.

“In fact, I’d argue that, for the first time in a very long time, they’ve become mainstream and normalized,” Withey said. “They’re not a reaction to anything now, and instead have become an acceptable part of a man’s appearance; they’re no longer — literally —remarkable.” He notes that there are similarities today to the past. “First, they are still a central feature of the male body, and decisions to wear them are very closely tied in with how society makes its own ideals of manliness,” he added. “Second, facial hair — and indeed being clean-shaven —is cyclical, so it’s interesting to look at the reasons why beards have spiked, then and now, to try to understand what drives them. Also, it gives us a unique window into how men have wished to look, and portray themselves through time.”

There are no comments for this post "Why Victorian Men Had Glorious Beards". Be the first to comment...