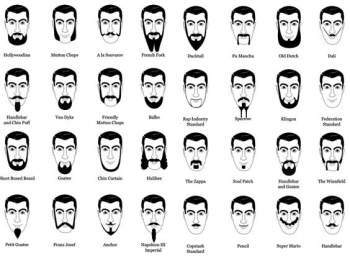 The shadow is the beginning stage for any beard style. A couple day’s growth gives a man a shadow beard that looks attractive and is easy to maintain. It is a style that was especially prominent in the ‘80s (i.e. Miami Vice), and is suitable for all face shapes. The Sexy Shadow is often the most accepted beard style in the corporate world.

Depending on how fast the guy’s facial hair grows, it usually takes from 1-3 days of not shaving for a shadow beard to appear. To maintain it, guys should shave any hair above their cheeks and below their jaw line. The beard should focus around the lower part of the face. It will go from shadow to heavy stubble before it turns into a fuller type of beard.

This style looks great on guys with round faces. It is also a popular beard for those who shave their heads. Some people call it a short goatee. It includes a short beard and mustache, in a circle on the bottom of the face.

The man with a rounded beard needs to keep his sideburns clean-shaven, and trim around the circle shape of the beard daily, including the cheeks and under the chin. The length of the actual chin hair is up to the person.

Men who have narrow chins may consider the Balbo, which carefully separates the mustache and a short, pointed beard. Since the style is so precise, it may take a little extra time for morning grooming. Traditionally, Balbo beards stay short to medium length.

For this stylized beard, the man has to quit shaving for about a month until he gets a full, long stubble. With a sharp, quality razor, he shaves where the mustache touches the beard, dividing them with a small space. The outside perimeters of the beard should stop at the mustache, and the rest can be cleanly shaven.

Here is a beard style that capitalizes on the side burns. Mutton chops can stand alone (i.e. President Martin Van Buren, or Elvis Presley), or they can attach to a mustache (President Chester Arthur). Today’s style usually combines a mustache and cleanly-shaven chin, and is perfect for men with square or rounded faces.

For mutton chops, men must let their sideburns and mustache grow until they touch. The bottom chin and lip should be kept cleanly-shaven. It is up to the individual as to how long and wide the sideburns grow; however, extra-long Edwardian sideburns are passé for now.

Guys who like pointed beards, like the Three Musketeers wore, will enjoy growing a Vandyke. It has the classic thin, pointed beard with a T in the middle, under the lower lip. The beard and mustache are unattached. It is named for the Flemish master painter, Anthony Van Dyke, who made the look popular. Van Dyke beards are complementary to guys with narrow chins.

It is not difficult to fashion the Van Dyke and keep it looking fresh. For those men who want one, they need to keep their sideburns and cheeks shaved, as well as the space between the beard and mustache.

When the stubble has grown out, it will create a full beard. It is an iconic look that pairs best for men with triangular-shaped faces. Guys who are genetically prone to grow heavy facial hair will not have a problem getting a full beard.

It may take a month or so for the heavy stubble to grow into a full beard. The only places that need shaving are the neck and cheeks. When the beard length is where the guy wants it, he should keep the beard and mustache trimmed daily.

These are beards that are grown longer than a full beard. As far as shaving is concerned, they are the easiest to maintain. The mustache and beard can be grown as full as possible, with no spaces in between them.

Some guys style their mustaches into a handlebar with this type of beard. There are men who can literally grow their beards to their waist. All that is required of a long beard is an occasional trim to keep the ends and edges neat. It looks good on any face shape.

Any beard style can be turned into a long beard. It may take a few weeks (or even months) for men to get the desired length and shape. It is a virtually shave-free style that can be combed for a well-groomed touch.

The Garibaldi is a modified version of a long beard. Some guys do not want the extra attention that a long beard may need. Instead, they keep their beard trimmed just bit higher than their collar bone. The sides of a Garibaldi are often flared for unique drama. Any shape of face would look good with this style.

After the man’s beard and mustache have grown out, he should trim the end and sides of the beard to keep it short. Fluffy sides and sideburns are totally up to the wearer. It is also common to see stylized mustaches with Garibaldi beards.

There are no comments for this post "Best Beard Trimming Styles And How To Get Them Men s Grooming Advisor". Be the first to comment...

There are no comments for this post "Short facial hair styles. Best Beard Trimming Styles And How To Get Them Men s Grooming Advisor". Be the first to comment...