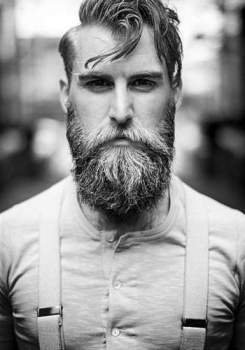 Have we reached peak beard? Aren’t we over the whole trendy facial fuzz thing by now? Absolutely not. In fact, the only thing we’re over is questions about whether we’ve reached peak beard yet, which went out of fashion ages ago. The beard is thicker, healthier, and as shiny as it ever was. It’s a trend that refuses to be trimmed back. Cool beards.

As long as there are men – particularly men who can’t be bothered to shave – there will be beards. But the big question is: do women like beards or not?

It’s not a simple yes or no, of course, because a beard is never just a beard. According to science, it can be a symbol of alpha male dominance, social status, and a means of sending sexy (or if you’re beard’s a mess, un-sexy) signals to prospective suitors.

A study from 2008 got 60 women’s responses to five facial hair styles – from clean shaven to full-on fuzz – and found that men with light stubble were most attractive, as both prospective short and long-term partners. Full beards, however, were rated for social maturity, parenting ability, and for being more masculine and aggressive.

A study by the University of Queensland in 2016 had similar findings. Co-authored by beardy science expert Dr Barnaby Dixson, it showed images of men with various stages of facial hair to over 8,000 women, and even manipulated the images to make other facial features more masculine or feminine. Again, stubble was the most attractive overall and rated highly for short-term flings, while full beard styles were deemed more appealing for long-term relationships. Beards were also found to signal age, status, and dominance.

An earlier study conduced by Dr Dixson found the same: heavy stubble was most attractive, but full beards ticked boxes for parenting skills and health. Also, the more facial hair, the higher the masculinity rating – particularly among women in the fertile phase of their menstrual cycle.

It all seems pretty straightforward fellas: stubble for sexiness, full beard for settling down and manly responsibility. Science has even proved that facial hair shows strength and status in the animal kingdom.

But in real life it’s never quite as simple. There have been all kinds of other reports about how bearded men are more likely to be sexist, beards are dirtier than toilets, and beards can fight bacteria, all of which are enough to change any woman’s perception of whether the beard is sexy or not.

To find out whether you should be reaching for the beard oil or the razor we surveyed some actual women with a broad range of qualifications to tell us what they think of beards.

Girl On The Net

“Ten years ago I’d have said beards really turned me off, because of the scratchiness and worrying about finding a stray crumb of pastry during a snog. Now, though, my current partner has a beard so I have grown to love it.

“I generally prefer a beard that’s short, but as a straight girl, the things that often turn me on are things about dudes’ bodies that are radically different to mine: stomach hair, a beard, that hair in the small of his back… So I guess it’s less about the type of beard and more just the fact that he has a beard. Overall, I’m a beard agnostic: beards are sexy if they’re on a sexy guy, terrible if they adorn the face of a horrible dude.”

“Beards on men are not just a secondary sexual characteristic, but also a symbol of masculine maturity and — in a patriarchal context — authority. Some men may be attracted to the idea of growing a full beard because they feel that it makes them look more authoritative — and that some women are attracted to the ‘strong man’ image they project. A man who pays his beard a great deal of attention in terms of grooming and barbering may well be trying to send a message”.

“Generally, on first attraction, I don’t really notice facial hair unless it’s a statement, like a sharp goatee or full-on Gandalf beard. The first thing I notice is the way someone carries themselves – and if they make me laugh. Visually, I like a little stubble, it can turn a baby faced cherub into a brooding, dangerous playboy. But it can cause unwelcome friction.

“I think an ideal for me, is after a few days, when it’s been trimmed with the grain so not too spiky and it’s laying flat and soft. Then it’s perfect – it catches and holds a man’s scent, it’s not gonna rub me up the wrong way, and it’s soft and pleasing to stroke. I also have a dirty little fetish for designer whiskers. I love a man that experiments with his look.”

“I still haven’t got my head around the whole beard craze. Long beards remind me of my older teachers at school and I can’t quite shift that association. I am all for a bit of stubble or a very short beard (and I mean very short) but as for a full-on beard its a no from me! It’s clichéd, but to pull off a longer beard style-wise, it definitely looks better with tattoos. Hats tend to look good on bearded men too.”

“Having a beard is fine, not having a beard is also fine. But beards with tattoos seem to act as some kind of proxy for personality on Tinder. It is not an interesting personality trait, just a thing growing out of your face. Men are lucky because beards can hide a multitude of lower face-related sins (double chin, weak chin). I wish I could grow a beard.

“I think we reached peak beard in 2016. I was sitting in a restaurant in Brighton and about 70% of male clientele had immaculately shaped hipster beards. If there’s one thing the ethnographic record does tell us, it’s that there is an amazing range of things humans do with their bodies, and what people consider beautiful. Beards, like many things, can be sophisticated signs interpreted in different ways, depending on the context and the person wearing it.”

“Styling facial hair on men makes just as much difference as styling the hair on the head, and yet I notice most guys don’t put that much effort in. I think a guy that has good grooming, including his facial hair, is attractive because it means he put effort in and is also a sign he probably cares about personal hygiene.

“There is definitely a bad thing with both – too unkempt and too designer. Going either way of the extremes is bad. With very unkept beards you risk looking dirty, with very designer beards you look narcissistic. If I had to compare it to something, it should be like the ‘no makeup makeup look’ girls do. It should be the amount of work that makes it look like you hardly put any work in.”

“Personally, I think the most important feature on a man’s face are his eyes, followed closely by smile. In terms of beards, a clean-shaven man is always more attractive. If I had to choose it would definitively be a short beard. Long beards I associate with Father Christmas and garden gnomes. Stubble can be sexy – Bradley Cooper and Mark Ruffalo wear it well – but it obviously causes stubble rash and can give the impression that the person hasn’t washed.”

“In terms of what’s most attractive in a man, beards don’t top the rankings – things like personality, physicality and political voting history (!) are more important. That being said, a good beard on the right man can really make him glo’ up (see Paul Rudd and Chris Evans).

“I prefer stubble or a short beard, as opposed to a full, big beard. It contours the face and says ‘masculine,’ ‘stylish’ and ‘rugged’, without veering into Cast Away territory. Like clothes, hair, jewellery, and every other aesthetic choice a person can make, beards do change the way you think about people. These things have strong cultural associations, after all. Longer beards = paternal associations. Clean shaven = wholesome and youthful. Goatees = pickup artists and buskers. Soul patch = avoid.”