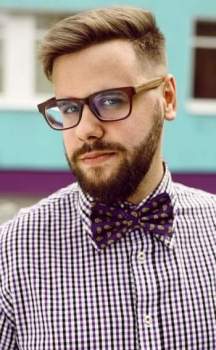 Keeping up with the trends requires a bit of commitment and skill. Knowing when a certain look is nearing its peak or on its way out is crucial before actually trying to imitate it. Those who feel that it is not yet passé to join in however need only be mindful on how suitable it may appear. It would not be worth the effort if the effect would look forced or unnatural. Such is the case with clothing, hairstyles or even beards. Being able to wear one is not the main objective. Looking good while having it on is the real goal.

There are different modern beard styles that look great on black men. These can range from the full beard, the goatee, the French beard, the Van Dyke and when done right, the curtain beard. Being able to grow any of these properly will highly depend on genetics. It is something that any man should be aware of before even attempting to grow their facial hair. Length would rarely be a problem. It is the density of their beards where they might need to temper their expectations. Getting assistance for this however is now readily available.

The use of follicular unit extraction or FUE for facial hair is possible to help create uniform looking beards. Any kind of patchiness will no longer be seen with the use of this method. Similar to what it does for a balding scalp, it takes healthy hair follicles from the back of the head or other parts of the body. These are then implanted into the areas where growth is most sparse. The client only has to wait for the recipient area to recover before doing anything to his beard. He will be happy to see the different styles he can do once it has been fully healed.

LeBron James is a good example of a curtain beard coupled with a moustache. His chin area and jawline has a thick amount of bristles growing from it. He did not leave his upper lip looking bare however and decided to cover it with some well-groomed facial hair. The rapper Common, formerly known as Common Sense has a thicker version of what King James has. It is actually a full beard, with the moustache portion connected to the chin area. The neckline is clearly established and the corners neatly rounded out. He is still able to appear neat despite having dense growth coming form his cheeks.

Cleanliness is very important. No amount of style would be able to compensate for a scraggly looking beard. Will Smith is a good example of how to keep facial hair looking nice and tidy. He has been using a variation of styles throughout the years but has always gravitated back to the French beard. It is a classic example of how a black man can look timeless by sticking to a simple routine. This requires the hair on the jaw, neck and cheek areas to be shaved off. What should remain is the moustache, goatee and if possible, the soul patch. It will resemble what some call as a circle beard. Regular trimming must be performed to ensure that this style stands out.

The Van Dyke is probably another modern beard style that a black man can use to enhance his appearance. This was originally from the seventeenth-century however it looks just as good in this era as it did back then. The look is achieved pretty much like the French beard only that the sides of the moustache are disconnected from the goatee. They look separate from each other while the goatee portion should be grown longer to create a pointed look. Careful attention to its grooming must also be given to create the desired effect. These beard recommendations are but some of the trendy possibilities for black men.

There are no comments for this post "Modern beard styles for black men". Be the first to comment...