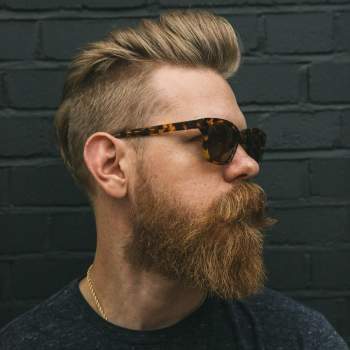 Every man has been faced with the dilemma of deciding whether or not to grow a beard. In this post, we'll help you determine the best time to grow your beard, how to grow it out & what to say when people ask you - "Dude, are you trying to grow a beard?"

Depending on your age and where you're at in life, finding the right time to grow out your beard is sometimes harder than you think. The following advice is written for men whose career or line of work may make it difficult for them to grow out their beards.

If there's one thing that is required to grow a beard, it's time. Finding the right opportunity to grow out your beard is often an important first step in deciding whether or not to grow your beard.

It's also important to look at the season's and times throughout the year where growing out a beard is generally more acceptable. Growing a beard between the seasons or during the month of September and January are natural periods of transition where people are more open to, and often expecting, change.

Movember also provides a four week window to grow out your beard without getting a lot of resistance from your peers -all while helping out a great cause!

How to Grow Out Your Beard

After deciding to grow out your beard, the next decision you must make is what type of beard you'd like to grow. There are hundreds of beard styles to choose from, but it's generally best to start with a beard that you will ultimately feel the most comfortable with.

For those looking to make the easiest transition, we recommend that you start with a full beard. The reason for this suggestion is that the full beard is the most conservative and acceptable beard for the workplace and gives you a "blank canvas" to try riskier styles once you get used to having facial hair and how others react to your new look.

Unlike other beard styles that may require a substantial amount of shaping or shaving, the full beard is also very difficult to get wrong which also makes it a great candidate for your first style.

Maintenance While Growing Out Your Beard

To ensure your friends, family and co-workers don't think your beard is a sign of you giving up on life, it's important to stay on-top of all your grooming - not just your beard - when growing out your beard.

Contrary to popular beard theory, when growing out a full beard, you need to define the neckline fairly early, within a week or so, so that others around you know that you're still taking your appearance seriously and that your intent is to grow a beard. Failing to define your neckline early may leave some people questioning or speculating the reasons for your sudden change in appearance, which is never good in the workplace.

Defining your neckline early on lets people know, without you telling them, that you are making a conscious decision to grow your beard and that you are determined to see it through.

"Are You Growing a Beard?"

This is a question that you will undoubtedly be asked as you begin to grow out your beard. Although it seems like a fairly simple question, sometimes it can make you feel uncomfortable because it may leave you second guessing your decision to grow your beard.

The most important thing to remember when growing out your beard is that you should be proud of your decision, and know that a lot of people ask this question simply as a conversation starter.

If this question does bother you, using humor is a great way to deflect their question while also showing that you don't take your decision to grow a beard too seriously.

Joke that you are on protest until they restock the vending machines.

Joke that you are growing out your beard until you receive a raise. Tell them you'll probably look like ZZ Top by the time that happens!

Most people likely won't care what you tell them, so keep it light and play it cool.

Objections from Family, Friends and Your Significant Other

This may be the hardest noise to ignore when growing out your beard. It's important to remember that your decision to grow your beard is a personal one and, regardless of what others around you may say or tell you, is something you should attempt to do if it's important to you.

The reason close family and friends may object the hardest to your beard is because beards are a sign of change. If they don't know the reason for your sudden change in appearance they may be worried that your beard is the first of more changes to come and their minds may race and jump to all sorts of conclusions!

To avoid this, it's best to communicate to them exactly why you want to grow a beard, what style and for how long you plan on doing it. Providing them with the "what, when & why" for your decision to grow a beard will allow them to better understand and accept your decision.

Finding the right time, deciding on the right style and effectively communicating your reasons for growing your beard will make your transition from bare faced to bearded much easier.

There are no comments for this post "Deciding to Grow a Beard - Finding the Right Time, Style, How to Let Rocky Mountain Barber Co - Men s Grooming Inspired by Nature". Be the first to comment...