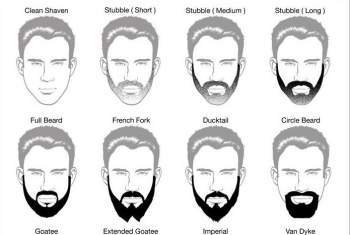 A collage of images from the "Sikh Project," on display at the Museum of Tolerance in L.A. from Sept. 11 to Nov. 3, 2019. (Amit and Naroop with the Sikh Coalition) Different kinds of beards.

Every day as a sheriff's deputy, Harinder Kaur Khalsa put on her uniform and badge and went to work helping to de-escalate conflicts in her community.

Meanwhile, Jatinder Singh Kahal heads to the family farm, having decided against law school in favor of the hard work of producing food for his country.

And cartoonist Vishavjit Singh patrols the streets in full Captain America garb in his fight against bigotry.

All of them wear the turban and unshorn hair that help distinguish them as Sikhs, followers of a faith that holds equality and service to humanity in the highest esteem. All three are among the 28 Sikh Americans featured in the "Sikh Project, " a portrait gallery now on display at the Museum of Tolerance in Los Angeles.

"The goal of this exhibition was just to show that, you know, Sikhs are average Americans, as well, and also just for Americans to get familiar with what the Sikh identity looks like," said Inderpreet Kaur with the Sikh Coalition, which commissioned the project.

The portraits on display are slick and full of character — smooth, bright and saturated, almost like paintings. Some are whimsical, others calm, still others haunting. The stories behind the photos shatter first impressions, constantly reminding the viewer that Sikhs, having faced discrimination and oppression around the world, are deeply passionate about freedom and equality.

Sign up for our daily newsletter to receive the latest on local politics, food, culture and the absurdities of L.A. life.

The son and grandson of Californian Sikh farmers, Jatinder Singh Kahal was born and raised in Central Valley, California. Jatinder earned his bachelor's degree from the University of California, Davis. Initially he considered law school, but inspired by the sacrifice of his family and other farmers, he chose farming. Jatinder and his family farm grapes, almonds and pistachios. They own and manage over 2,500 acres and remain motivated by the strong work ethic and vast knowledge needed to put food on tables across America.

Jatinder embraced the Sikh articles of faith after graduating college and became an Amritdhari (initiated) Sikh in 2013. He feels that no amount of success or money has been able to give him the inner peace he has found through Sikhism. He hopes to pass the same values on to his two children.

The project was initially conceived in 2014 by British Indian photographers Amit Amin and Naroop Jhooti, known professionally as "Amit and Naroop."

Both are Sikh. But they don't wear turbans. They don't have long beards. And they didn't start this project with the intention of making a political or humanitarian statement.

The idea came from their agent, who thought a special project highlighting their unique interests outside of work might help score points with the big advertising agencies that often booked them for commercial work. Their agent suggested something that reflected their heritage.

After some initial research, they found the internet was not "very kind to the Sikh identity," Jhooti said. The images they found played more like stock photography of cab drivers, grocery store clerks and the like.

To counter that perception, Amit and Naroop decided to put Sikh men in a studio to strip away any context that might tempt viewers to form prejudgments. With a single, constant background in which only the people change, viewers can really study the individual, Jhooti said.

"Stylistically, it'd be very Western with our kind of advertising look, but the content would be Indian," Jhooti said. "So it felt like a perfect marriage."

They initially focused on men as a way to explore the different styles of beard and turban.

Tarandeep Singh Bali grew up in the only Sikh family in the village of Chandak, Jammu and Kashmir, which is on the border of India and Pakistan. His village was affected by the region's political and civil unrest, and during his childhood the local gurdwara (Sikh house of worship) was attacked numerous times. In 2000, more than 30 Sikhs were massacred in neighboring areas.

Tarandeep moved to the United States in 2007, but the attacks on his faith and identity followed him; throughout his life he has continued to encounter hateful remarks and even violence. These attacks have made Tarandeep truly understand the value of his turban. To him, his turban is an extension of his soul. The nine meters of cloth he wraps around his head represents the sacrifices and history of his ancestors.

How to shave beard

It was supposed to be simple, but the project soon took on a life of its own.

"You know, we photographed 10 men initially, put them on our website, and we felt brilliant. That's our job done," Jhooti said.

Then came requests for more images. The original project grew to include 34 British Sikh men and multiple exhibitions, the first funded on Kickstarter. Positive press coverage fueled still more requests for images. And then they were approached to make an American version by the Sikh Coalition, whose work to combat discrimination in American society ranges from advocating for better hate crime laws to representing victims to producing anti-bullying curricula for schools.

After the terrorist attacks of Sept. 11, 2001, Sikh Americans suddenly found themselves the targets of a rising tide of hate and violence. One of the first hate crimes — possibly the first — committed in the wake of 9/11 was against a Sikh American.

"It was only after we heard stories of the persecution and the prejudice and discrimination that American Sikhs were facing, that we realized that, okay, this has to be done in America," he said.

In 2009, Deputy Sheriff Khalsa was told she could not wear her turban while in her sheriff's uniform, forcing her into a non-uniformed desk assignment that kept her segregated from the public. After years of community advocacy, in 2013, the Alameda County Sheriff's Office complied with a new state law against workplace discrimination. This finally allowed Deputy Sheriff Khalsa to wear her turban with her uniform and made all uniformed assignments available to her.

They decided the American version should be more representative, incorporating both men and women. Amit and Naroop worked with the Sikh Coalition to identify potential subjects and began a series of interviews.

At the core of these interviews were a couple of simple questions: "What's your relationship with the turban? How has it affected your life day-to-day?"

Many of the responses were positive, but often they seemed to convey experiences of discrimination and discomfort, Jhooti said:

"Every day we expect to be bullied, harassed, looked at."

"People don't sit next to us on public transit."

In the UK exhibitions, the information cards that ran alongside the photos were simple: name and occupation. In the U.S. version, the personal stories became just as important as the images.

"It wasn't just about, you know, guys who look cool, or women who look amazing," Jhooti said. "A lot was about, 'Okay, what has this person done to add value to the community? And what are they doing to promote the Sikh identity in a positive way?"

One of the subjects of the American exhibit is musician Raaginder "Violinder" Singh, who told LAist by email that he felt Amit and Naroop's work personifies his identity and artistically gives the community a voice at a time when they need it most.

There are no comments for this post "This Portrait Gallery In LA Highlights The Everyday Heroism Of Sikh Americans: LAist". Be the first to comment...