How do you style a beard. 20 Amazing Tom Hardy s Beard Styles–Dreadful Daredevil(2018) 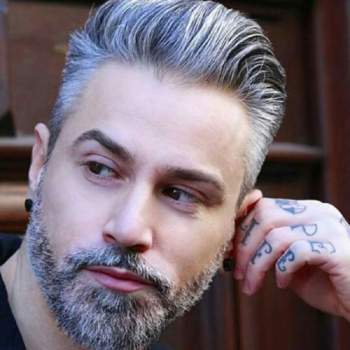 This picture shows Tom with a short stubble beard – possibly the beginning of something fuller. It’s a terribly attractive style for him and helps accentuate his best features; kissable lips and high cheekbones. He’s kept the lines neat as well and the moustache off the lips. Amazing beard styles.

Doesn’t this look make him look ready for an adventure? Or that he has just returned from one? Either way, Tom is able to wear a bushy beard such as this without it seeming scruffy at all. The key is steady maintenance and regular conditioning.

In this picture, he is wearing a stubble length beard along the sides with more hair volume over the chin and moustache area. Both have been snipped to the same length and the beard has been given a rounded shape just under the chin.

Is there a look that Tom Hardy can’t pull off? It seems not! Here we see him with his face and head shaved completely bald with only a cultivated moustache remaining. The moustache has been combed and twisted to have pointy ends.

Once again Hardy has paired an established beard with a simple slicked back hairstyle for maximum effect. His beard looks soft and conditioned and while it has not been trimmed neatly it has a romantic and laid back feel.

Long or short facial hair suits Tom but he is really able to smoulder in longer styles like this. Here he wears a handlebar moustache and a full beard that has slightly more volume toward the chin area.

This photo gives us a great view of how Hardy keeps his beard styled. The sides here are stubble length and the moustache and chin hair have been grown out. Notice how the neck is kept clear to help provide a definition.

Try to imagine Tom in this picture – relaxed with a baseball cap and t-shirt – with no beard. It’s just not the same, is it? His trademark beard helps add to his bad boy persona and give him an edgy look.

Beards don’t always need to be perfectly clipped to be desirable as we can see here. His beard is long and shaggy however you can see that the neck has been shaved to give the look shape.

This look is ultra masculine and just slightly unkept which only adds to the sex appeal. The hair is lush and has a tousled texture that makes him look as though he’s been working outside or engaged in physical activity.

Here we see Tom Hardy with a trendy hipster look. His hair is styled to have a slight lift and his facial hair has been clipped. He’s wearing a full moustache that just covers the top lip and a soul patch.

A handlebar moustache is not for everyone but Tom can definitely wear it. He’s kept the rest of his facial hair at a long stubble length and allowed the hair above his lip to extend just over the sides. The underside of the lips has been shaved clean.

In this look, the beard is lovely and full all around with the moustache feeding into it. He’s allowed some hair to grow beneath the lip but kept a shaved patch below that.

For this style, Tom has started with a handlebar moustache that extends down to join with the beard. The beard is limited to just the chin area with a soul patch while the rest of his facial hair is stubble length.

In this look, Tom’s beard is very curly and has been grown out fully, then trimmed into shape. The moustache has been neatly combed down and once again just covers the top lip.

Tom Hardy pulls off a beard well thanks to his understanding of what makes a beard sexy. He understands what looks suit him and he sticks to those. While his beard is not always trimmed neatly the hair is always shiny and well conditioned and that adds greatly to its appeal. So why not take some tips from Tom and incorporate them into your own beard style?

There are no comments for this post "20 Amazing Tom Hardy s Beard Styles–Dreadful Daredevil(2018)". Be the first to comment...