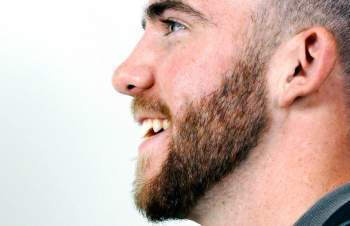 Ever since beards regained their popularity, scores of men have shot past the traditional look and begun to resemble  Nick Offerman's full bush  — as if they've just survived in the wilderness for months without a razor. "All types of guys are trying to pull off these neo-Moses beards," says Severin Dickson, owner of New York's Hairshop. "This is often a mistake. You can never go wrong with classic styles honed to one's face shape." A properly maintained beard can be a great look for any man — even after the economy bounces back.  Coarse beard.

Just because you're "growing it out" doesn't mean it should be uniform length. "Leaving beard hair longer on the sides and shorter at the chin [ like Jake Gyllenhaal ] will add fullness to a thin face," says Suki Duggan, owner of Donsuki Salon  in New York.

"A close-trimmed beard, cut to a quarter of an inch or even less, can accentuate the jaw and make you look more masculine," says Dickson. Note: Just because it's glorified three-day growth, like the one Ben Affleck sports,  doesn't mean you can slack on outlining and trimming.

A small, pointy beard serves to lengthen a face. "A round face can be 'narrowed' by concentrating on vertical planes of the face," Duggan explains. "Well-trimmed sideburns with highly defined edges or a triangular goatee [ like Johnny Depp's ] will elongate and draw the eye downward, adding the illusion of length to the face."

When outlining, use a translucent shaving cream such as Dove Men+Care shave gel to see exactly what you're taking off, thus helping you keep things even. End your beard just above your Adam's apple to help define your jawline ($5.50; cvs.com ).

Use a good comb — like one from Kent, whose products have specially designed teeth that won't get hung up in your scruff — and scissors every day after a shower. Comb downward and snip stray hairs to give your beard a clean, shaped look ($5; kentbrushes.com ).

Unlike with the hair on your head, you want to use a petroleum-based pomade, such as Murray's, to help define your facial hair. Use it to pull a Vandyke to a point or tame wild sideburns. (Water-based pomades will run if you spill your beer on them) ($3; murrayspomade.com ).

How to make beard style

For a full beard, let whiskers grow for four weeks before your first shave (to get an even fullness). Use the lightweight Panasonic Precision Hair and Beard trimmer on a number 3 guard to trim your chin and cheeks, a 2 underneath your chin, and a 1 on your neck and upper cheeks. For "designer stubble," use a 2 guard on the whole beard ($40; panasonic.com ).

For a clean, healthy look, shampoo your beard every two or three times you wash your hair, but condition every day. "No Irish Spring and no Axe," warns Dickson. "Those will dry it out." Bluebeards's shampoo and conditioner moisturize with almond oil, shea butter, vitamin E, and aloe ($14; bluebeardsoriginal.com ).

There are no comments for this post "How to Tame a Wild Beard - Men s Journal". Be the first to comment...