Top beard look. She Outshined Conchita: Italian Vogue Placed A Model With A Beard On The Cover 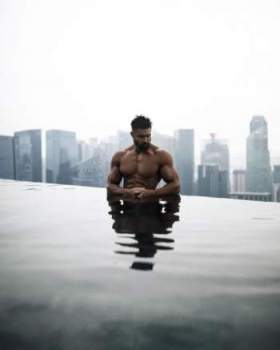 Popular glossy magazine Vogue loves to amaze its readers. So, at the beginning of this year, one of the edition’s cover presented a model without makeup for the first time in history. Beard model.

38-year-old Gisele Bündchen decided to conduct this brave experiment. Pajamas and slippers became a complement to the natural image of the former Victoria’s Secret model.

The magazine didn’t stop there. On September 20, the official Vogue Italia page on Instagram shocked the people with the pictures of a red-haired woman with a beard! They were made for the October edition and featured 41-year-old model Guinevere van Seenus.

The photo session was dedicated to Italian singer Mina Mazzini. In her time, a similar image appeared on the cover of her 1981 album Salome.

Guinevere shared her impressions after the photo session:

I like these weird moments in my work. Thank you for another unforgettable day.

The American model has repeatedly appeared on the covers of Vogue Italia and also participated in advertising campaigns for such famous brands as Versace, Kenzo, Prada, and many others.

It should be noted that Mina Mazzini appeared in the image of a bearded woman long before the winner of Eurovision-2014 Conchita Wurst. In addition, the extravagant singer completely shaved the eyebrows and was famous for her enormous hairstyles.

Mazzini is 78 years old now. Despite her age, she doesn’t even think about ending her music career. This year, the Italian diva will release a new album.

What do you think about such style? What kind of image do you find more spectacular – 1981 or 2018? Share your opinions in the comments!

There are no comments for this post "She Outshined Conchita: Italian Vogue Placed A Model With A Beard On The Cover". Be the first to comment...