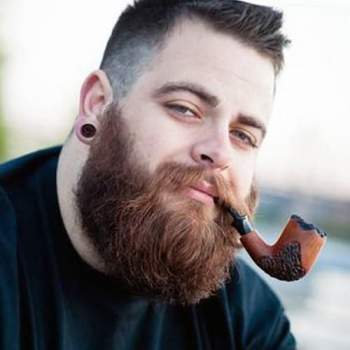 Rounded visages require a beard style that has angularity which will make the jaws look stronger and the face narrower. Focus on styling your facial hair that will add length to the face. Notice how Mel Gibson’s “chin puff” beard elongated his face.

Growing mustaches is a good idea for it will draw the attention towards the center of the face. Just look at how Kevin Connoly’s mustache makes our eyes drawn away from the rounded circumference of his face.

A square face can actually look a little intimidating. You have to wear a bead style that will help in softening your jaw lines. Avoid sporting full beard for such style will only emphasize how angular and square your face is. In order to downplay the square quality of the visage, focus on styling your beard and mustache in a rounded way. Try sporting a “petit goatee” like Johnny Depp so that the attention will be moved towards the center of the face. His curly locks also soften the squareness of his face.

Brad Pitt’s “anchor” beard elongates his chin and deemphasizes the jaw line. Height was added on the hair of his crown area to extend his square forehead.

Jared Leto grew full facial hair to add density around the jaw line in contrast to his wide forehead. This full beard style should be trimmed regularly to maintain a clean outline.

There are no comments for this post "Private: Beard Styles for Different Face Shapes Mister Beard". Be the first to comment...