Styles of beards and how to trim them. The Chris Evans Beard: How To Get Captain America Facial Hair 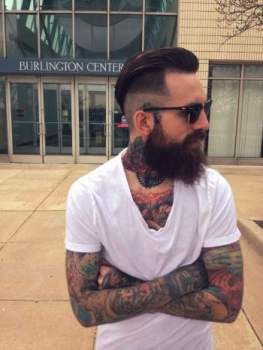 Better known as the goodie-two-shoes of the Marvel universe and cleanest-cut superhero around, Captain America, Chris Evans nevertheless does a great sideline in rugged facial hair. Although it was first seen in a number of his early films, the Chris Evans beard really became a thing with Avengers: Infinity War and now the glorious facial ruff is back for for his latest role as a gritty Mossad agent in The Red Sea Diving Resort on Netflix. Ways to style a beard.

Now, when you’ve got an A-list jawline like Evans it might seem a curious decision to cover it up. But the look has gracefully aged the star, turning him into one of Earth’s mightiest hair heroes and making the internet weak at the knees, too. This is a beard with its own fan art. Buzzfeed called it “the most important part of Infinity War”.

To be fair, it’s a good beard. Great coverage, thick without being bushy, a great foil for long, slicked-back hair and Cap’s squeaky clean image. A beard to separate the men from the boys – and one that’s definitely worth emulating.

“To achieve this level of hirsuteness most guys will have to commit to the long haul if growing a beard from scratch,” says Denis Robinson, creative director at barber chain Ruffians. “I’d recommend going unshaven for three to four weeks to start.

“At this stage book in with your barber for a tidy and shape. Get them to clean up the neck just above the Adam’s apple to help define the chin and taper out some of the bulk – which if left unattended can give the appearance of a double chin.”

Captain America would not stand for a double chin and neither should you. Look to keep up regular beard trims every three to four weeks after the first, asking your barber to focus below the jaw, as Evans has, thinning and tapering the facial hair to create a stronger jawline while the cheek line is kept soft and natural.

The latest incarnation of the beard is a little longer and a little unkempt. Set in the ’80s, The Red Sea Diving Resort sees Evans pair the rugged beard style with one of the hair trends of the decade (and today), a flowing mid-length cut.

“This length beard with longer hairstyles can look very retro and if a guy is casual in his approach to hairstyling, it could look borderline messy and unkempt rather than low maintenance, so you might want to think about a slightly sharper hairstyle,” recommends Robinson. This approach to haircare should also filter down to how you look after your beard too.

“Hair, no matter where it sprouts from, tends to depreciate in quality the longer it gets. Beards need as much TLC as the hair on your head. Shampoo as frequently as your hair. Make sure you clean right down to the skin to remove dead skin cells and invest in a good beard oil for moisture and nourishment. If your beard is particularly dry and coarse then use a good quality beard balm to combat this.”

There are no comments for this post "The Chris Evans Beard: How To Get Captain America Facial Hair". Be the first to comment...