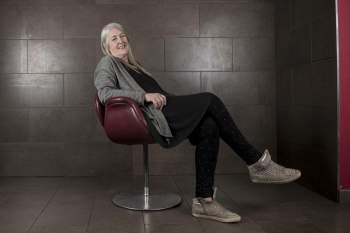 The James Beard Foundation is committed to supporting women in the food and beverage industry, from chefs and restaurateurs to entrepreneurs dreaming up new ways to make our food system more diverse, delicious, and sustainable. Our Women’s Leadership Programs (WLP), presented by Audi, provide training at multiple stages of an individual’s career, from pitching your brand to developing a perspective and policy on human resources. As part of the Foundation’s commitment to advancing women in the industry and Audi’s #DriveProgress initiative, we’re sharing stories from female James Beard Award winners and Women’s Entrepreneurial Leadership Program alumni. Through #DriveProgress, Audi is committed to cultivating and promoting a culture that enables women to achieve their highest potential by removing barriers to equity, inclusivity, growth, and development. World best beard style.

Below, Rachel Tepper Paley traces the career of Women's Entrepreneurial Leadership alum Liza Hinman, from landing her “dream job” at Gourmet to discovering her real calling in the restaurant kitchen, to owning a restaurant and revamped motor lodge in California wine country.

In the early 2000s, camped out in a cramped cubicle in Condé Nast’s New York City headquarters, Liza Hinman realized that she needed a change of scenery. Long before the chef and restaurateur opened her breezy eatery The Spinster Sisters in Santa Rosa, California, Hinman was an editorial assistant at Gourmet magazine during the publication’s final glory days. It was a heady time: legendary editor Ruth Reichl had just put Rocco DiSpirito on the magazine’s cover, a controversial move for a publication that generally reserved the space for images of perfectly-styled dishes. The culinary scene, rocked by the then-nascent concept of the celebrity chef, seemed awash in possibility. Hinman was thrilled to have snagged her dream job in the midst of it all.

Or at least, it had been her dream job. The halls of Gourmet were a world away from Hinman’s childhood in Connecticut, where as a pre-teen, Hinman had taught herself to cook from a Betty Crocker cookbook. The Gourmet gig marked her entrance in the professional food world, and she was grateful for the exposure it afforded her to the nation’s best chefs, recipes, and ingredients. But the job left her wanting.

“I realized I was sitting in a cubicle on 42nd Street talking all day about chefs and restaurants and the exciting new world that was exploding around me,” Hinman recalled. “I didn't want to just talk about it anymore. So I decided to go to culinary school.”

She enrolled at the California Culinary Institute in San Francisco and set her sights on breaking into the city’s food scene. The cross-country move paid off: in the years that followed, Hinman nabbed positions under Dana Tomasino at Woodward’s Garden and Loretta Keller at Bizou, two talented female chefs whose management styles would influence her own.

Working for women was a priority for Hinman from day one of her career. She yearned to work in supportive environments where “I wouldn't have to slog my way up the totem pole getting yelled at [and] hoping for my next opportunity.

“I would see [Tomasino and Keller] managing the challenging circumstances that always arise in the restaurant kitchen, and also just how they would treat their employees,” she continued. Of all the kitchens she worked in, “the ones I was most comfortable were often the ones where a woman led.”

In 2005, Hinman bid farewell to San Francisco for Sonoma County, where she began working at famed Italian spot Santi Restaurant in Geyserville. In all, she’d spend eight years there, the last four as executive chef. At the end of her tenure, she and her husband welcomed their first child.

“I was starting this new phase of my life—it wasn't just myself and my husband anymore.” Hinman was left wondering: “how I could reframe my career and include family?”

The answer arrived when Eric Anderson approached her with the idea for a restaurant that would become The Spinster Sisters. Co-owning a place offered the flexibility Hinman craved but presented new challenges. Santa Rosa hadn’t before seen many restaurants like it—seasonally-driven and chef-inspired, with international flavors and an industrial aesthetic—which made winning over the locals difficult. “We were a little bit of almost pioneers,” Hinman said of the restaurant’s opening in 2012.

Succeeding has meant adapting to local preferences without sacrificing her own standards and style. Santa Rosa is a big brunch town, so the mid-morning meal has become a major focus. Big hits include specialties like chocolate doughnut holes dipped in blackberry sauce, and the “South A Scramble” with farm-fresh eggs, smoky bacon, zucchini, crimini mushrooms, caramelized onions, and local goat cheese. Once guests’ trust is earned at brunch, they’re more likely to return for dinner, when the menu pushes boundaries with dishes like crispy pork belly with apricot mostarda and tamari-glazed chicken thigh yakitori.

Bettering the business has been an ongoing process. Three years ago, Hinman joined the inaugural class of the James Beard Foundation’s Women’s Entrepreneurial Leadership Program. She “walked away with a pretty big to-do list”—which included everything from finding ways to better utilize her managers' strengths to being smarter about social media. It also gave her a sense of community with her fellow classmates. “Getting to spend five days with 20 of my peers who are in the same place in the world and really understood all of the underlying challenges that we as women and moms and business owners all was the absolute best part,” she said.

Hinman and Bugica have already expanded the business to include The Astro, a mid-century motor lodge with a modern twist. Their goal is to keep both businesses marching forward using the tools Hinman picked up from the leadership program, while at the same time crafting a sustainable lifestyle for herself and her family, which now includes twin girls.

“I just love raising my kids to see the business that I have created and that I run,” Hinman said. At times, “I go back and forth in my brain about if this is still the right thing and the smartest thing,” she confessed. Then she thinks: “they get to see their mom do this.”

Rachel Tepper Paley is a writer and editor based in New York City. Her work has appeared in food and travel publications including Bon Appétit, Bloomberg Pursuits, Eater, Travel + Leisure, Conde Nast Traveler, and more. Follow her on Instagram at @thepumpernickel.

There are no comments for this post "For This Chef, The Greatest Success is Finding Balance, James Beard Foundation". Be the first to comment...