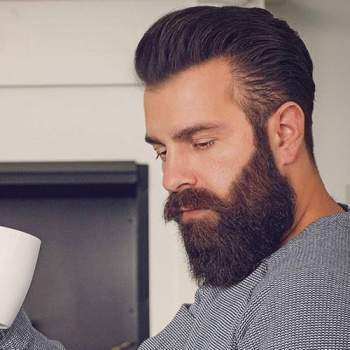 Hollywood and Bollywood actors aren’t only experimenting with their roles and wardrobe choices, but also their hairstyles and facial hair. Read on to know what kind of beard is best for you.

It would be fair to say that no other Bollywood celebrity has sported as many styles of beards as Ranveer.(Instagram/Ranveer Singh) Best full beard styles.

Over the past few years the style quotient of Bollywood celebrities has scaled new heights irrespective of gender. Celebrities aren’t only experimenting with their roles and wardrobe choices, but also their hairstyles and facial hair. Be it Bollywood’s own quirky fashion icon Ranveer Singh’s many interesting beards, former chocolate boy Shahid Kapoor ’s unkempt Kabir Singh beard, Abhishek Bachchan’s classic faded stubble, the goatee that Johnny Depp’s Captain Jack Sparrow sported or Jason Mamoa’s wild beard, there is style inspiration for everyone.

Read on to know what kind of beard is best for you:

Ranveer Singh is Bollywood’s ultimate fashion icon, his style statement is not only unique and fearless, but also breaks gender stereotypes (when he show’s up in skirts and ghagras!) and is effortless. It would be fair to say that no other Bollywood celebrity has sported as many styles of beards as Ranveer has.

From his crazy, but constant urban hipster beardsman look (above), to his on-again off-again beardstache - a mix of a moustache disappearing into stubble (below), there is no style that Ranveer can’t pull off!

Shahid Kapoor was once Bollywood’s ultimate chocolate boy with his cute face, personality and choices of roles. But those days are long gone, with films like Haider, Kaminey and Udta Punjab, Shahid proved that he is way more versatile than he gets credit for. In his latest movie, Kabir Singh, Shahid sported a bushy beard, and although he looked unkempt on account of his hair, with the right amount of grooming the beard will be perfect! One will need the assistance of some beard oil to help grow a thick beard and a trimmer, to ensure the length is uniform. This beard is perfect for round and chubby faces.

Jason Momoa is best known for his role in Game of Thrones, where he portrays Khal Drogo. Other than Jason, his huge, scraggly, unkempt beard also garnered many eyeballs. This beard covers most of the face and is perfect for men with square, oval, round, triangle and diamond-shaped faces.

If one were to equate Ranveer Singh’s quirks to a Hollywood actor, Johnny Depp would be the right answer. When Johnny Depp isn’t playing a character he usually sports a beard known as the Van Dyke. The Van Dyke can be achieved quite easily, it is an unconnected moustache and a goatee, and looks best on men with chiselled and angular faces, as most of the jaw is clean shaven.

Abhishek Bachchan’s beard in Jhoom Barabar Jhoom probably got more attention than the movie itself. Abhishek’s chiselled jaw is the perfect canvas for any beard, and even though the actor has been away from the limelight for a while now, his grooming game is still strong and the actor sports a perfectly faded beard. While the style has only come to the forefront in the past few years, it has picked up, and is perfect for men with oval, square and round faces.

There are no comments for this post "Celebrity Beard Styles 2019: Ranveer Singh, Shahid Kapoor, Jason Momoa give ultimate beard inspiration - fashion and trends - Hindustan Times". Be the first to comment...