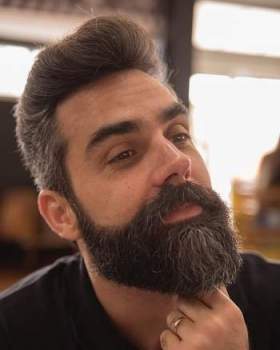 Many have attempted but very few have triumphed. Growing full beard styles, that is. Growing a beard may look easy but you have no idea about the amount of hard work that you need to put in to successfully sprout a beard. Mens full beard styles.

Other men make it look so easy and effortless, while some men do everything possible to grow even a decent-looking stubble, but to no avail. We understand your burning desire to sport a beard ASAP, but it’s best to manage your expectations now so that you won’t end up frustrated when the beard just isn’t happening. So before you start talking to your friends about the best full beard styles that you can wear next month, take a look at some of the common reasons why most men fail to grow full beard styles.

The most important thing you must remember when you decide to grow a beard is that everything will itch. Everything will itch a lot.You will feel itchiness on your face like you’ve never felt before, and you will want to scratch your entire face against the wall just to keep the itchiness at bay.

This is the natural process of beard growing, and sadly, we cannot just skip this part and fast forward to where you’re already rocking the full beard at a hipster convention in L.A., or somewhere there are plenty of hipsters. No, we cannot do that. You have to stick it out, itch and all. Until the hair starts growing longer, and the itchiness gets less and less. Unfortunately, most men ditch the beard at the first sign of itch, never to return again.

This is not Hogwarts, and you just cannot magically whip up a beard with a flick of your wand. If only growing a beard is as easy as that. No man will be left clean shaven, we guarantee.

Just like growing out the hair on your head, it takes months, even years, to get to your desired length. There is no scientifically proven way that can speed up the beard growing process. You really have to wait it out and be patient. The same kind of patience you demonstrate waiting for the next season of The Walking Dead. Unfortunately, men prefer to wait for the zombies than for their beards to grow.

Even the most passionate men, who are willing wait a whole year for a beard to grow, still cannot grow a beard victoriously for the painful and embarrassing reason of bad genetics. They who have the energy and the commitment are so cruelly dealt a fate worse than a receding hairline: the inability to grow a beard.

There’s really no way around it. If you don’t have the hair, how can you get the beard? Because of genetics, so many men have given up on growing a beard ever. For them, it’s better to not wear any kind of facial hair at all than hold on to the few wispy hairs on the face and hope people think it’s a beard.

So many men have also desired to grow a beard, but because of the kind of work they do and their very busy work days, they just don’t have any time left to look after a full beard. Sometimes, a full beard is also not allowed in the office, or where they work. Especially for police officers, firefighters, health practitioners, etc. Also, some people just don’t feel comfortable looking at a long and full beard. It’s rather distracting to them. So rather than a find a new career or a new employer, men just opt to ditch the beard instead.

When it comes to growing a beard, you have to get through the tough part first. You have to let the hair grow and overcome the itch. You have to think long-term and visualize the fruits of your labor. But since you’re not that committed to the plan, you can easily forego all these and just leave the beard for some other time.

When you’re growing a beard, you must start a good beard care regimen, as soon as the first signs of hair start sprouting. Failure to do so can leave the skin underneath the beard dry and flaky. Worse, you can get beard dandruff. Gross. How about beard acne? Even grosser.

A beard needs proper care just like proper care you give to the hair on your head. If you’ve never heard of beard shampoo or beard conditioner, or even beard oil or beard balm, then it’s definitely a wise decision for you to skip the beard.

You probably just want to look cool and join the bandwagon, that’s why you decided to grow a beard. As soon as you get over the fascination, or as soon as you take your desired amount of selfies for your profile picture, you will just as quickly shave it all off. Goodbye, full beard style.

The next time you see a man with a full beard style, take a moment to think about the beard that you could have been wearing now. Nah, just kidding. Nothing personal. Beards are a whole level of commitment and willpower. If they’re not meant for you now, you can always do it again at a much later time.

There are no comments for this post "Most Men Fail to Grow a Full Beard Style – Here is Why...". Be the first to comment...