Beard style for face. Harry Styles grew a beard, except not really 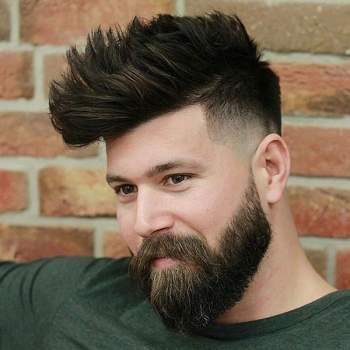 Harry Styles is blessed with some very good genes. The 24-year-old Brit is often praised for his baby-smooth skin and boyish good looks, despite being in his mid-twenties. Not to mention, he’s got gorgeous, thick, wavy hair that’s always perfectly styled. Oh, and talent. He’s got a fair amount of that when it comes to singing and dancing, and acting too. People can’t help but look at him, listen to him and drool at… (oh? is that just us?). Everything Styles does is undoubtedly scrutinized, and being a former boy-band member with loads of superfans can’t help. Stylish beard look.

So whenever Styles is spotted with anything even slightly different about his appearance, people take notice.

Styles was spotted on the streets of New York this week sporting some new facial hair, but at first glance of the paparazzi pic, it’s hard to notice anything different about his face at all.

If you’re reading this on smartphone, now’s the time to reverse pinch the screen with two fingers and zoom in to see the few stragglers. It’s an adorable attempt that more closely resembles the sparse hairs on Homer Simpson’s head than an actual beard. But if Styles is into his new look, that’s all that matters. Not all men can grow a full Jason Momoa-esque beard. And that’s totally fine with us.

Some guys are blessed with bushy facial hair as early as their late teens while others have to wait well into the thirties for wiry hairs to sprout. Sometimes it never happens. Men who grow thicker beards are more sensitive to the amount of testosterone in their body (though, on average, most men have about the same amount), and are therefore more responsive to the hormone that stimulates facial hair growth.

Styles fans are divided over the star’s latest look. Some are into it:

me: uhh about that ridiculous false statement about me not liking beards..

Me too!! And the bit scruff! Doesn’t he just look amazing with this beard? 😩

While others would rather he remained his boyish old self, completely clean shaven:

Well, at least my beard is better than Harry Styles’.

Will Styles’ new style stick? Only time will tell. He might just be at the Oscars with a role in the Best Picture nominated Dunkirk, so we’ll have to wait and see whether he thinks this micro beard is red carpet approp or not.

There are no comments for this post "Harry Styles grew a beard, except not really". Be the first to comment...