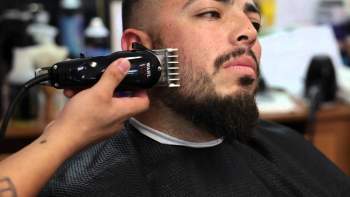 For a lot of the 19th century, some type of facial hair was pretty much standard among men in Britain. But in the 20th century, being cleanshaven rapidly became the norm. Facial styles.

A series of charts posted to the DataIsBeautiful subreddit by Reddit user celacanto shows the incredible decline of facial hair from the 1840s to the 1970s. It's originally from a 1976 paper from University of Washington economist Dwight Robinson, and is based on men's appearances in the Illustrated London News, the first ever illustrated news weekly.

According to the paper, historical events don't seem to have been the cause of rising beardlessness. The safety razor started its rise to dominance around 1905, but the trend towards being clean shaven had already been going on for years.

It's about shifting style preferences. The data comes from a relatively small subset of elite, British men, but its still a fascinating shift.

Another chart from the original paper shows the rising dominance of being cleanshaven:

If male celebrities, Lloyd Blankfein, or residents of Brooklyn are any indication, facial hair is in the midst of a renaissance, so it would be fascinating to see these charts updated somehow. The paper estimates the "trough to trough" period to be around 100 years across different styles, so we may be due for a resurgence.

There are no comments for this post "These Charts Show The The Epic Decline Of Various Styles Of Facial Hair - News - Pontiac Daily Leader - Pontiac, IL - Pontiac, IL". Be the first to comment...