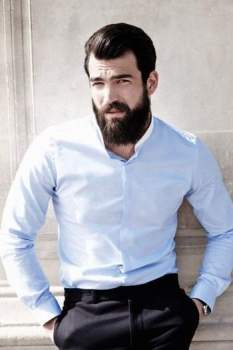 There’s something about a great beard. A beard style that could make someone from across the room ask, ‘’who is that?’’ Is it a weird looking one that you get conspicuous? No. Just something great and one which matches your face & hair shape and dressing style too. That can’t be too hard when you get a few ideas to get you get to know about all the stunning beard styles, you’ll get to decide what works for this might be your lucky day because we got you covered. Corporate beard styles.

These are the kind of styles where the sideburn run from the chin to connect to the hair at the face sides.

As the phrase ‘’dress for success’’ goes, apparently there is also ‘’shaving for success’’. A beard could be frowned upon in the office but this one can’t. Actually, your boss could try getting to know where exactly it was that nicely done.

This type of beard is usually consistently getting trimmed and groomed with great precision. It is fuller yet well-maintained and the slightest patches of facial hair removed.

This style is also called a stubble beard. All you have to do is grow the beard for around three days and keep trimming to maintain the close-to-skin length. This style is a bit rugged and yet you can trim the edges really smooth to get that ‘’rest of the face cleaned up look’’. If you are neat all over the place, a little scruff could go a long way. Could be used in many work settings from casual to corporate looks (if neat on the neckline and other face edges)

This extremely neat beard style is all about clean trimmed edges meeting and cutting sharp corners. The trimming is sharp and with great precision. The look can be rocked in different settings. It looks corporate fitting due to the flawless edges and short trim.

This is the type of beard that you can let grow as it wishes, not so much though. It needs to be neat yet full so trimming the edges and the beard growth in bits will grow it perfectly. It’s all about making the density, shape and length as neat as it can be.

You can grow this beard for all the seasons while trimming the split ends. This is the kind of beard you let take care of itself. Apart from the split ends, it requires minimal care (not even shaping) and after one year you got yourself a yeard.

As yeard is for a year, tweard is for two consecutive years. Unless it is keeping it all neat and healthy, you are not supposed to take any length off it.

Just let it flow till it sees no beyond. That’s the terminal beard. You just let it grow till it stops. When it stops, you know you got your terminal beard. This can be kept for some time as a signature style. Who knows when it’ll stop? No one. You will also know when it does.

Growing to a limit of just below chin, this beard also accessorizes with a mustache. With the neck typically kept hairless, we can say that this style represents a ‘’I know I don’t mind’’ attitude.

With partial beards, one can customize their own due to the flexibility of creative patterns. This makes them seem a lot more unique than full beards.

Sideburns are something we can’t cross the street without seeing a man in them. They are the most popular type of beard styles and also the most worn in casual settings as well as formal ones. You can identify a sideburn of any kind no matter the shape desired.

This beard style is basically formed by a patch on the chin with a straight-line patch up to the lower lip. It can grow full but trimmed to some inches.

This is formed by a goatee plus a mustache. These two connect to form a circle and hence the name.

This beard attributed to the Flemish painter took his name because of his signature look. This style was adapted and to date it is a sleek beard style worth having. It is formed by a mustache and a patch on the chin but they do not meet like the circle beard does.

Just as the whale, this style exudes aggressiveness. Also called the Amish beard, this moustache less beard grows long and full. It is also common among the Muslim men.

This kind of mustache pronounces the jawline while omitting sideburns. It is basically a full-grown beard along the jawline plus a mustache.

The cop mustache style grows and gets groomed neatly without going even slightly over the lip.

The handlebar is a normal mustache, but it has curly ends. It usually needs some waxing to hold it in place.

This full type of mustache grows freely, but it gets maintained in length and edges. It needs to appear full and natural.

This Mustache grows to hand down from the mouth corners. As much as it is long it shouldn’t touch the lips.

Your face, genetics, hairstyle and lifestyle determine whether any of the beard styles fit. If not, you might appear ridiculous in whatever setting you are in. However, it doesn’t mean that you can’t try. Try out some beard styles and keep your best barber for life.

There are no comments for this post "Beard Styles: How to Rock Them, Indulge Now Blog". Be the first to comment...