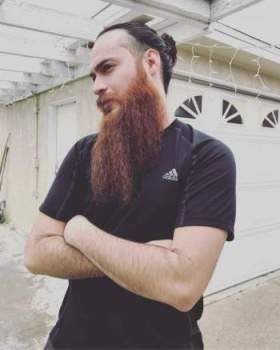 Growing your hair out at least shoulder length will be one of the best styling decisions you ever make. There’s just something about medium hair that looks so casual yet slick, confident, and sexy at the same time that the ladies simply cannot resist. And when you model your hairstyle on a celebrity, it’s even better. Here are the hottest 45 mens shoulder length hairstyles you need to copy right now. Long goatee styles.

He came into everyone’s attention as the fierce yet handsome warrior Khal Drogo on the incredibly successful TV show Game of Thrones. Then, he turned heads as the coolest Aquaman ever. Jason Momoa is a stylish guy.

Speaking of Game of Thrones, there was no way we could have made this list of mens shoulder length hairstyles and not mention Kit Harrington’s curly tresses. Jon Snow has the curls that get the girls.

The thunder from down under, actor Chris Hemsworth will forever be remembered as the god Thor in the Marvel universe. He wears mens shoulder length hairstyles in real life as well, his blonde hair highlighting his blue eyes.

From Marvel to DC with a look at Batman himself. In between projects, actor Christian Bale has shoulder-length hair in his natural brown as well as a very well-groomed beard with quite a bushy mustache.

Here’s a throwback picture of actor Johnny Depp from his youth. He used to sport mens shoulder length hairstyles. His bob was light and feathery with just a few blonde highlights to sweeten up his visage.

Ben Barnes has been wearing medium-length hair longer than we can remember. He is usually cast in period pieces where he plays handsome yet troubled characters, such as The Picture of Dorian Gray or the successful Westworld.

Actor Diego Luna has been favorably pulling off the wet look for years, way before it became a hot trend. It requires you to wear extra hair gel so that you can look as if you’ve just stepped out of the shower.

Hollywood hunk Charlie Hunnam is famous for movies such as Arthur and The Lost City of Z, and he is here to show us how to wear blonde hair and mens shoulder length hairstyles without looking like a surfer dude.

Harry Styles undoubtedly has one of the best heads of hair in the business. His locks are dark brown in color, shiny, silky, and luxurious. Therefore, when he decided to grow his hair, his collective feminine fandom sighed.

has been wearing this particular haircut or slight variations of it ever since he was a teenage boy and we became acquainted to him in Bill and Ted’s Excellent Adventure. You know what they say. Why fix it if it’s not broken?

Even though he became famous for wearing a long, blonde, wig as the elf Legolas in the Lord of the Rings series, Orlando Bloom has dark and curly hair in real life. He loves mens shoulder length hairstyles.

Is there any hairstyle out there that Jared Leto hasn’t tried yet? He dyed his hair platinum blonde, he chopped it all off, he wore an emo swoop for a while, and we even saw him with a neon pink mohawk.

Do you remember the days when Tom Cruise wore mens shoulder length hairstyles? Probably not. Here’s a picture of him in a very 80s to 90s heartthrob haircut with layered wavy medium hair.

It’s no secret to anyone that Brad Pitt has always flirted with long hair. He wore it in movies such as Legends of the Fall and Troy but in his private life as well. Here he is showing his allegiance to mens shoulder length hairstyles.

Actor Adrien Brody decided to pair his lovely curly and dark brunette hair with a fantastic bushy beard. We just love how the whole ensemble sets off his magnificent olive colored eyes and gives him a soft look.

If you like the shaggy Adrien Brody Look, we got.

Another hot celebrity in love with mens shoulder length hairstyle is none other than funnyman Russell Brand. He has naturally curly hair which he loves to show off by letting his hair grow out until it reaches medium length.

Another former member of One Direction who grew out his hair for a while is Zayn Malik. He used to slick it all back with some hair wax and let the wavy locks fall carelessly down his shoulders.

Even though he is not a natural blonde, former soccer player David Beckham has sported this hair color for most of his life. He has also tried on mens shoulder length hairstyles and look how good they fit him.

If you ever wondered what Hugh Jackman would look like with long hair, this is it. He is sporting a classic 90s haircut with layered bangs parted down the middle and swept to the side that curtain his face and sweeten his features.

British actor Henry Cavill has worn long hair in a number of his movies, so we’re quite used to it. He has naturally curly hair which cascades down his shoulders beautifully, making us understand why he was cast in all those period dramas.

Here is a photo of Rockstar Mick Jagger from 1972, when he was watching the final cricket test between Australia and England. He was wearing his iconic shaggy style with baby bangs and brightly patterned suits.

Sofia Vergara’s husband looks better and better as he ages, there’s no doubt about that. Here he is sporting mens shoulder length hairstyles and a gray beard that shows off his rugged handsomeness.

One of our all-time favorite comedy guys, actor Ashton Kutcher has come a long way since his days as Kelso on That 70s Show. However, he could have fit right back in with this haircut. It’s a sleek and feathery middle part.

Here’s something you don’t see every day – Colin Farrell with long hair. But we must say that he is just as handsome as ever with his raven black tresses showcasing them off at this red carpet event.

Football player Tom Brady has dark blonde hair which he wears in mens shoulder length hairstyles. The cut is rather simple, resembling a modern mullet in the back with overgrown bangs and a feathery finish.

This singer’s iconic look is unmistakable by now. He always wears his hair medium long and shaggy, as if he just got out of bed accompanied by the same type of hat. The James Bay brand is easy to copy, if you like it.

Here’s another take on mens shoulder length hairstyles that you can try to follow. Austin Butler has blonde hair which he wears tousled and parted on the side. The coolness factor, however, that’s entirely up to you.

Is there any haircut that actor James Franco does not look good in? This is a light brown shaggy hairdo with a middle part that highlights his coffee-colored eyes. He wore it for one of his movies.

This Lost star has the perfect surfer-dude haircut. It’s sandy blonde and very low maintenance. You won’t need any hair care products for this one because the sea breeze will take care of everything.

As far as mens shoulder length hairstyles go, Matt Damon has got it locked. He grew his hair out for one of his roles and, on his off-duty time, used to wear it in a simple ponytail at the back of his head.

Let’s take a trip down memory lane to the glorious world of glam rock. And who better to take us there than Jon Bon Jovi himself? It was an age of scandalous rocker outfits and, of course, massive hair.

Let’s continue our trip down rocker alley with Aerosmith’s Steven Tyler. This is a photo from his younger days with the band when he used to sport his curly shoulder-length tresses, a set of bangs parted down the middle, and fantastic black eyeliner.

Undoubtedly one of the most good-looking men in rock history, Sebastian Bach was the frontman of heavy metal band Skid Row. But were do you know him from? He’s the bassist of Hep Alien, Lane’s band in Gilmore Girls.

Who here hasn’t heard of Kenny G? Or one of his songs? This is the man himself. He is famous for his smooth and sultry sax and jazzy tunes. In real life, Kenny has deeply curly hair and loves mens shoulder length hairstyles.

We’re back to actors as we focus on Norman Reedus and his wet look. Norman has longer than average bangs and a layered hairstyle to match. He also sports a goatee. If you’re interested, here are more you can try.

In a major departure from the role that made him famous, actor Daniel Radcliffe can be seen wearing Victorian garb and mens shoulder length hairstyles as he embodies Igor, Victor Frankenstein’s assistant in Frankenstein.

Without a question the most famous role of his entire career so far, Tom Hiddleston flawlessly played the trickster god Loki. Here he is with his signature slicked-back long hair and Loki’s well-tailored black suits.

He’s a fantastic and handsome actor whom you might know better and simpler as Thorin. Richard Armitage became famous worldwide when he played the leading dwarf in The Hobbit. Here he is with a cute ponytail.

When styled perfectly, the slick back wet look can be an amazing choice. However, make sure you put it all together very well and refrain from wearing this look at the office. Keep it casual and simple.

Although his hair was wavy to curly in the epic that made him famous, Viggo Mortensen actually has straight hair in real life. His artistic side makes him a huge fan of mens shoulder length hairstyles.

We saw the King, so now it’s time for the Steward. Sean Bean has straw blonde hair which he wears in a medium and layered cut, especially when he’s asked to grow his hair out for different movie projects.

He has known immense success with his series Supernatural, but he will always be Dean to, maybe, an equally large crowd. He was Rory’s first boyfriend on Gilmore Girls, and we’re glad to see he still wears a version of his 2000s haircut.

Here’s a throwback pick of everyone’s favorite ginger. This was Rupert around the time of The Goblet of Fire when he grew his hair out and wore mens shoulder length hairstyles. And who wouldn’t when you have such a gorgeous natural hair color?

If you want to feel like a champion or if you need some inspiration, why not model your haircut after the one worn by tennis superstar Rafael Nadal? He loves mens shoulder length hairstyles and he looks outstanding when he wears them.

We absolutely love this look with the shaggy blonde hair and dark to highlight his amazing blue eyes. Jamie Campbell Bower really knows a thing or two about styling, which is why he is definitely one to watch.

Mens shoulder length hairstyles have the fantastic quality of being very low maintenance. All you need is a good conditioner to keep your locks hydrated and some hair oil for extra shine, and you’re good to go. Let us know in the comment section below which one of these celebrity-inspired haircuts was your favorite!

August 2019: We updated the styles in this article.

There are no comments for this post "45 Men’s Shoulder Length Hairstyles to Be the Ultimate Eye Candy OBSiGeN". Be the first to comment...