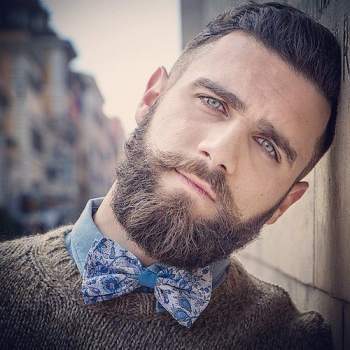 Sam Alnusiry owns Ottawa South’s Sunnyside Barber Shop. He arrived from Iraq in 1993, earned his barber’s licence, and has owned his shop since 2003.

As Sam runs the buzzer over my head – number one all over — I show him pictures of politicians to analyze.

First is Johnson, looking like an unkempt schoolboy waiting for tuck to open. Whereas upper-crust school chum David Cameron’s flawless coif helped smooth the way to Brexit in 2016, Johnson’s “I-just-got-out-of-bed-and-didn’t-bother-to-comb” look suggests he will drive the project to its haphazard conclusion.

I feel a twinge of envy looking at the picture of Trudeau as Sam presses the buzzer down to my scalp. The Tories were right. Trudeau really does have great hair.

Sam describes this as “a scissor cut but messy style.” I ask him what it reveals about the man.

“He’s very organized,” he says. True: Johnson jockeyed for the top job for years. “But he should work on his hair. It’s a bit too long. You’ve got to calculate the face. Shorter hair would suit him.”

Next: Trump. “The hairstyle fits him exactly,” says Sam. “If he combs it straight to the back, his face is going to look longer.” Trump’s look ties into his faux-nostalgic, “Make America great again” theme. “This is a very old haircut,” Sam says, laughing. “That’s an Elvis haircut!”

As Britain eyes a post-Brexit, U.S. trade deal, I ask Sam to compare the leaders’ hairdos. “If Trump goes out, he’s got to use lots of hairspray to keep his hair level,” he says. “Johnson likes to be free. He’s more outgoing.”

Next: Trudeau. I feel a twinge of envy looking at the picture as Sam presses the buzzer down to my scalp. The Tories were right. Trudeau really does have great hair.

“He’s a young, family guy. He cares about others. His hair’s a little bit messy but it suits him perfectly because his face is a little bit long.”

A lineup of customers starts to form as I call up a picture of Conservative leader Andrew Scheer, whose look is, well, conservative. “His haircut looks perfect,” says Sam. “It fits him exactly. He combs it a little bit straight back. It fits his face. Not too short. Not too long.”

If Scheer aims to appeal to moderates in this fall’s election, his smart but non-descript style may be an asset against Trudeau’s layered, cosmopolitan, “urban élite” look.

Next: NDP leader Jagmeet Singh. His long trusses are contained within a scarlet turban but he sports an unruly beard.

“He’s a very good guy,” says Sam, “but if he trims his beard a little it would be more fashionable.” Like Johnson and Trump, Singh may be looking to upset the status quo.

As Sam tells me, “a haircut is not just a haircut.” In the U.S. and Britain, the politics of hair suggests a rejection of conventional leadership styles. Has this populist movement peaked? Canada’s fall election may tell us. Will Canadians opt for well-styled liberalism or short-back-and-sides conservatism? Might we choose the new direction of the turbaned and bearded NDP? Or the approachable bob of the Greens?

Don’t ask me. My haircutting options are pretty limited these days. It will continue to be “number one all over” for this writer, whichever party wins.

There are no comments for this post "Richardson: What s in a politician s haircut? Just ask my barber, Ottawa Citizen". Be the first to comment...