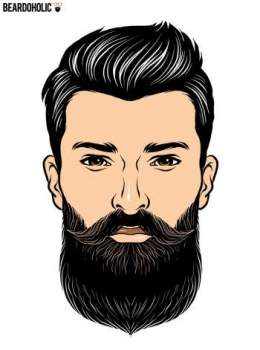 For centuries, men have grown facial hair and have taken great pride in their styling. Plucked from the pages of history, some iconic beards have inspired strong emotion and gravitas. Jesus and Santa’s beards evoke warmth and trust, while the sinister Satan and Ming the Merciless stimulate fear. Shakespeare’s is an artistic expression, while Abe Lincoln denotes patriotism. From Dumbledore’s wizardly whiskers, to Jack Sparrow’s sexy anchor, facial hair comes in all shapes and sizes, and is as individual as its wearer. A figure of masculinity, there is much debate as to which styles attract – or repel – status, style, and sexuality. Regardless of its connotation, there is no disguising facial hair’s epic growth in popularity. Face shaving style.

The male fashion industry is experiencing a revival of old-school styles, including those for facial hair,” according to Jason Crampton, the Ivywild barber at J Gregory Salon. “Barbershops exemplify Old World craftsmanship and tradition,” he explains.

The return to craftsmanship, like masonry, glassblowing, and home brewing, Crampton believes, has inspired a variety of beard styles. With this resurgence of beards, Barbering is also reclaiming favor.

Crampton clearly takes pride in his craft and declares that his clients are drawn to the nostalgic experience of reclining in a Barber’s chair with aromatic steam towels, a lathering shaving cream massage, followed by a skillful straight razor shave. “That hand-crafted, razor look, with skin tight fades, precision shaping and sculpting, is a craft that only true barbers are trained do,” he explains. Today’s barbershops are male refuges, where bewhiskered brethren gather for soothing treatments and man-cave discourse.

The bearded lifestyle and vernacular is historic. In 1913, London bon vivant Upton Uxbridge Underwood published “The Language of the Beard,” a legendary prose among beard wearers and men of leisure. Its central premise was that “the texture, contours, and growth patterns of a man’s beard indicate personality traits, aptitudes, strengths and weaknesses of character,” not unlike today. Beards were so prominent throughout history that taxes were even applied to them. For example, King Henry VIII of England and later, Czar Peter I of Russia, both introduced beard taxes that varied with the wearer’s social position and the weight of their beards.

While today’s men are not required to pay taxes on their beards, the decision of which style to choose can often be just as taxing. Designs run the gamut and are often influenced by cultural trends. Here are some of the current favorites:

The Full Beard: The full beard has an intentional scruffiness that projects an anti-corporate image and appeals to musicians, artisans and counterculture figures. Modern inspiration comes from Viking era programs like “King of Thrones.”

The Balbo: A tailored mustache, soul patch and chin beard combo, touted as one of the sexiest forms of facial hair. The Balbo was re-introduced by Tony Stark’s beard in “Iron Man”.

The Leonardi: An oft-requested version of the short boxed beard. Well groomed to stiff perfection, shaped lower across the sides of the face and inspired by King Leonidas in the movie “300”.

The Van Dyke: A moustache and goatee disconnected with cheeks shaven. Named for the 17th century Flemish painter, it appeared in force after Johnny Depp’s “Pirates of the Caribbean.”

The Chin Curtain: and its longer cousin, the Old Dutch: Runs across the edge of the jawline and meets at the chin. Think Amish and Abraham Lincoln.

The Musketeer: A chin strip combined with a trimmed Hungarian Mustache. In addition to its namesake, this style represents a veil of secrecy derived from anarchist Guy Fawkes, popularized by the movie “V for Vendetta” and is currently used as a guise of the hacker group ‘Anonymous’.

Beard style is a personal choice that reflects the attitude and persona of the wearer. No longer just for lumberjacks and urban hipsters, facial hair is trending in professions not typically associated with beards such as bankers, businessmen, movie stars, news anchors – even athletes are now sporting facial hair.

Beards require continual maintenance to look their best, and aficionados are usually equipped with sophisticated grooming products and tools. Barbers of today provide men with strategies they need to cut, sculpt, and maintain their beards.

“We school men to take ownership of their style,” says Barber Crampton. “Beard oil,” he says, “is a must.” It limits frizz and increases shine, “just like little girls’ hair.”

The reemergence of beards represents a natural accessory that is uniquely masculine. A show of confidence and self-expression, men are returning to craftsmanship and rugged individualism. Facial hair signifies the male drive to quietly, yet boldly, make their statement to the world, reclaiming what is innately theirs.

There are no comments for this post "Shaving Face - Colorado Springs Style - November,December 2014". Be the first to comment...