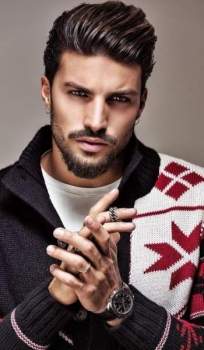 The beard has recently become very popular again. In social networks, even memes began to appear, making fun of the two main fashion fetishes - these are beards for men and eyebrows for girls. Sarcastic ridicule does not appear at all because it is not beautiful, but because literally everyone is passionate about it. And in pursuit of perfection, fashionistas and fashionistas often go too far. For example, some girls are so keen on eyebrow makeup that they look like Marfushenka darling from the fairy tale “Frost”. Oh well, let's talk about eyebrows in another article, today post after all about beard haircuts. Different men's facial hair styles.

Unlike young ladies, men are unlikely to spoil their image with a beard. The main thing here is to choose the right haircut. Take, for example, hair color: brunettes only need 3 day old bristles to look brutal, but it’s harder for blondes - short bristles do not look very good, so it will take longer and harder to grow a beard.

Types of beard haircuts and their names

Anchor The name speaks for itself: a small beard in the shape of an anchor + thin mustache, separated by a strip in the middle.

Balbo. Unlike the anchor, the strip along the edge of the lower jaw is wider.

Brett or Hollywood Beard. The main feature and difference is that the beard covers the chin and lower jaw, but does not connect with the whiskers.

Goatee. Its more popular name, but less harmonious is the goatee. Represents vegetation around the mouth with a long tuft of hair on the chin.

Chinstrap literally translated chin strap. A thin border of hair fringing the face from one temple to another.

Burnsides (burnsides) - only thick sideburns with a clean shaven chin.

Captain Jack, or Van Dyck. It got its first name in honor of Jack “Sparrow”. Third - in honor of the artist Anthony Van Dyke. Her other names are French beard or Chekhov’s.

We sorted out the main types of beard. Now let's look at which options will be especially relevant in 2016.

On this, in conclusion, I propose to look at a few more inspiring examples. By the way, did you notice that not every beard is suitable for a particular haircut? So that's it about fashionable men's haircuts 2016 years will be discussed in the next article. In order not to miss, I suggest subscribing to the blog news (on the page “About the blog / about the author” ).

Here he is - a fashionable image of a modern man

Men's beard is a symbol of brutality. More recently, a sign of a successful and stylish man was a smoothly shaven face. And today, more and more representatives of the stronger sex prefer to grow a luxurious thick beard. Those who think that this is a manifestation of laziness (supposedly not to shave every day) are deeply mistaken, because a beard requires careful care.

Why are women attracted by a beard?

Wearing a beard is not just a tribute to fashion and principles. For many, this is a way to attract the opposite sex. Men's beards, stylish and brutal, always attracted women. Anthropologists have conducted certain studies in this regard. It turns out that the beard is a powerful tool not only for humans, but also for many representatives of the animal world.

Scientists who conducted research on primates have proven that some males have distinctive features that make them more attractive to females and provide competitiveness to other individuals. So, depending on the type of monkey, it can be big cheeks, an elongated nose or a growth on the lip. Scientists have come to the conclusion that the beard in humans has a similar function.

Confirmation of this conjecture can be found in the UK 1800-1900. Then the number of young women was significantly less than the male population. It was then that the British began to wear intricate mustaches and beards to attract the attention of girls.

Speaking of the beard, many do not even realize how many varieties and forms of such a "decoration" are known today. Everyone can choose an option suitable for a particular appearance. Here are the most popular types of male beards:

Full beard - occupies the space from the temple to the temple, and also implies the presence of a mustache that smoothly passes into the bulk of the hair.

"Goatee" - a small rim near the chin with an island in the middle.

"Islet" - a small amount of hair under the lower lip.

"Van Dyck" is a goatee in combination with a mustache.

"Suvorov" - a small antennae in combination with curly sideburns.

"Anchor" - a goatee, elongated and pointed down. It implies the presence of a mustache.

"Chin" is a wide continuous bezel that runs from one temple through the chin to another temple.

"Ducktail" - an elongated full beard with a pointed end.

“Insect” - two ponytails hanging on the sides of the chin.

"Franz Joseph" - a mustache, lowered down and turning into sideburns. The chin is loose.

"French Fork" - a full beard, the long part of which is divided in two.

"Sails" - long whiskers with a mustache.

Men's beard is not just an element of style. With the help of this detail, you can favorably emphasize facial features or hide flaws. So, depending on the shape of your head, a beard can be styled as follows:

Owners of a square face will go a small beard under the lower lip. It is good if it is triangular in shape (this will help make the oval more correct).

The triangular face can be slightly corrected by a rounded wide beard that goes from the temples to the chin.

The task of chubby men is to lengthen the oval, a spectacular mustache, turning into a beard, will help here. It should have a square shape.

If the shape of the face resembles a pear (a person with an elongated chin), it is undesirable to wear a beard. Nevertheless, if you want to join the general trend, focus on long whiskers.

Men's hairstyles with a beard

A beard is not an independent element, but only part of the overall ensemble, which also includes a haircut. They must be in harmony with each other. So, men's hairstyles with a beard imply the following basic options:

If you have a beautiful skull shape, the best option would be a shaved head (or a small "hedgehog"). Such images are suitable for both young, confident guys, and men over 30.

Extra long hair looks great with both a beard and a mustache. Your hairstyle will look especially stylish if you collect the hair on the top with an elastic band.

The men's mustache and beard go well with hairstyles, implying an elongated top. It can be laid back or left strands casually falling on the forehead.

Many people mistakenly believe that a man's beard is good in itself and does not require any additional care. Pay attention to the following rules:

If you plan to constantly wear a beard, you will have to purchase a special machine. Of course, you can use a razor, but it is less effective.

Beard requires daily care. Therefore, every morning you need to adjust the length of the hairs, avoiding overgrowing.

If you are not satisfied with the color of the beard, or if gray hair appears on it, do not try to paint it with female hair dye. For the male beard, special dyes are provided that provide rich color and safety.

If you combine a beard with whiskers, you will have to carefully care for your ear area. Remove all hairs from the shells with tweezers or a special machine.

How to care for a beard

Fashionable male beards require regular and thorough care. You should be guided by these basic rules:

every day, adjust the length and borders of the beard with a machine, razor or scissors;

after each meal, you need to carefully examine the vegetation on the face to see if there are any particles of food in it (ideally, it would be washed with shampoo, especially if you ate something fatty);

use special gels, varnishes and waxes that will help give your beard the desired shape and fix it for the whole day;

for washing hair, choose natural-based products that will not cause skin irritation;

if you have a long beard, you need to comb it regularly (to facilitate this process, use special conditioners);

do not use a hair dryer for drying hair, because it will negatively affect the condition of the skin (just use a towel);

so that the beard is beautiful and healthy, periodically treat it with natural oils (burdock, castor or coconut);

if your beard is too rare or does not grow fast enough, get a dermaroller and special serum for home mesotherapy.

Men's mustache, beard have many advantages. Reviews allow you to highlight such positive points:

there is no need to daily shave off overgrown stubble, which saves a lot of nerves and time;

considering that you do not need to use the machine, the skin condition improves significantly;

a beard allows you to hide imperfections in appearance or to adjust the shape of the face;

if you have a youthful type of face, beautifully designed “vegetation” will add courage to him;

a beautiful and well-groomed beard creates an aura of success and high social status around its owner;

such an ornament attracts representatives of the opposite sex;

the beard is growing fast enough, and therefore you can constantly experiment with its forms;

if you’re tired of facial hair, you can shave it off in minutes.

Is a man's beard dangerous to health?

More recently, American scientists conducted a study whose results shocked the stronger sex. It turns out that male beards, stylish and brutal, are a hotbed of bacteria. Analysis of microflora allows you to compare it with the one that is contained (sorry!) Under the rim of the toilet bowl.

Scientists concluded that the largest number of microorganisms is concentrated around the mouth, as well as on the mustache. That is, owners of lush vegetation are more vulnerable than others to skin diseases, intestinal bacteria and colds. Thus, the owners of the beard should treat it with antibacterial soap several times a day (especially after eating).

Men's short beards, long or decorative whiskers and antennae - all this is at the peak of popularity today. Nevertheless, to look spectacular, you will have to make a lot of effort. Do not think that a beard is a way to get rid of daily shaving and other related problems. Care will only increase, because you need to maintain shape, good texture, and carefully monitor hygiene. But a correctly selected beard will help you hide the imperfections of your appearance and adjust the shape of your face.

There are no comments for this post "Types of beards in men. Haircut fashionable beard, types and types with photos.". Be the first to comment...