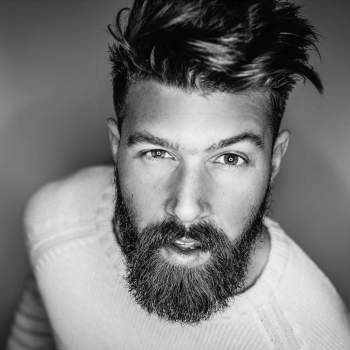 Facial hair never goes out of style, but in the Fall and Winter seasons we certainly see more of it. The leaves change colors, the weather cools down, and men begin to grow their beards. This month we have seen many variations of facial hair, but there is definitely a theme that the top styles are following, and we hope to shed some light on these here. Stylish beard styles.

This beard has been around for decades and can be worn in a number of ways. It is signified by the strip of hair beneath the lower lip, which is distinct from that of the hair covering the chin area. Often, the beard looks to be in a circle shape around the chin with a point at the base. More modern goatees are worn with accompanying mustaches, which is one of the major themes this Fall.

You know how your face looks at the end of the day, or the following morning after a day when you had a clean shave? That 5 o’clock shadow isn’t the faux pas it used to be, but is actually making an appearance in the everyday lives of many men in North America. You can spot this look on several celebrities, making the scruffy unshaven look appear like it was planned to be displayed on purpose. It may never be chic, but it is a trend you are sure to see this Fall.

Don’t have time to grow a beard? No problem, this style will keep you on trend without all of the labor intensive process of growing a full beard that you don’t know what to do with.

Get Hip With The Hipster Beard

This style is a little less tailored than the others, but just as acceptable this fall, as many men choose to let their facial hair grow long and less tailored. The thick style can be trimmed and shaped to better distinguish the cheeks or separate the beard from the mustache, but the popular chin hair tends to be a little bit wild, offering up that oh so hipster statement of, “I don’t care.”

Groomed so well the social media world will be calling you “on point”, the professional beard is full, but tailored, shaped to the extreme, and well maintained over time. This is usually a full beard complete with connected sideburns and a mustache, all trimmed and shaved to the same width with even smooth edges and lines. This style is a big player for Fall 2015, and looks best when worn with short hair, rather than long shaggy dos that would better pair with the 5 o’clock stubble look or a hipster beard.

Very similar to the goatee, the Van Dyke is a style from years past which has made a bit of a comeback in celebrity culture. This Fall we are seeing many of these pointy beard and mustache combos. Many men who wear their facial hair this way choose to create a point at the tips of the mustache with wax. Similarly, the beard can be combed with beard oil to a clean point at the bottom.

No matter which beard style you decide to wear this Fall, you can be sure that by joining the facial hair club at all, you will definitely be on trend. If you aren’t sure which style best suits you, start by growing a basic beard and mustache and then asking your barber to trim it for you in a popular style. Magazines and celebrity websites are a great place to see how men ae choosing to wear their beards across the country.

There are no comments for this post "Top Beard Styles For Fall - Blind Pig Barber Company". Be the first to comment...