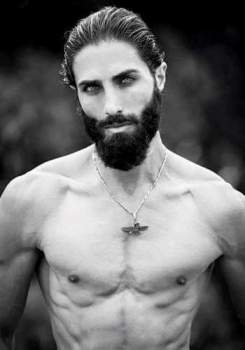 "Bigen Blackout." That's what the hood calls it. A mystical mix of chemicals whipped up and applied to hair, and like magic—or Magic Marker, as it were—beards look blacker, more asymmetrical, and hair looks thicker and fully restored.

In a layman's hands, Bigen is nothing more than semipermanent hair dye. But in the hands of a master barber, Bigen becomes a fountain of inky youth applied in such a way that a razor-sharp hairline can be shaped and manipulated, or tufts of hair sprouted on the face look like a full mass of beard. Hairlines are sculpted tightly back into their starting blocks; beards become so sharply angled that pro skiers would be wary of those slopes.

The roots of Bigen are thick. Some would argue that its use as a hair alternative started in Atlanta. Others would say that the trend of using Bigen to enhance a beard became popular in Philly. And, as with most things related to blackness, there are those who believe that New York is responsible for Bigen's new growth.

Merely mentioning this could have me outed from the Black Men's Club, but the truth is that people have been aware for some time that Jamie Foxx's hairline didn't just return to its 14-year-old glory by itself. And people have wondered why at one point Carlos Boozer's hair and beard curiously looked like a 7-year-old girl's Sunday church shoes. While Bigen's powers can't claim the glory of bringing LeBron James back to Cleveland, it is most likely responsible for bringing LeBron's hairline back to the front of his head. And don't think we didn't see you this past Sunday, Ray Lewis, looking all Bigen'd out.

For years you had to be in the know. Your barber had to be willing to learn the secrets of the trade. Willing to mix chemicals with the best of them and put on plastic gloves and paint new hair or a new beard onto someone who was brave enough to sit in the barber seat to let it happen.

Is it new? No. Black men have been Bigen'ing since the early 2000s, but it isn't talked about as a remedy for balding or thinning hair, partly because the secret is supposed to go unnoticed. The onlooker is as much a part of the process as the newly Bigen'd scalp.

It's like a weave. The main purpose of it is for people to believe that it is all your hair. For years black men who struggle with receding hairlines or "moon roofs" have been left with only two manly options: wear their thinning hair proudly or shave their heads bald.

Black men are quick to call other black men all sorts of derogatory and degrading names for anything close to primping. We don't allow room in the black masculinity space for a conversation about hair dye or what to do with gray hairs or how to handle the cruel joke of premature balding. For most black men, a conversation about hair loss can only be found in the rhythm of jokes. It has to be shrouded in humor because it is an uncomfortable topic to broach. But black men and hair haven't always had such tangled roots.

In 1909, Garrett Morgan invented the chemical relaxer. Black men and women alike have had their heads fried, dyed and laid to the side. In the 1920s, black men sported conks. In the '60s, it was Afros. The '70s were all pressed and permed to their pimped-out glory. In the '80s and '90s, black men's hair was grown long, with the sides faded and the top boxed. In the 2000s, it was cornrowed or dreaded up.

It isn't that we are afraid of styles, but all of these trends require one thing that Bigen doesn't: hair. It is one thing to walk into a barbershop and ask for an Afro to be turned into a high-top fade; it is quite another to ask that an applicator brush be applied to a thinning scalp.

So to my brothers in the Bigen struggle, I say this: Do you. Mix it up, paint it on and wear it proudly because you are the test group. You are the canary in the coal mine who will make it safer for those who come behind you to know that sporting a baldie isn't the only option for a black man who finds himself on the losing end of a fight he can't win.

There are no comments for this post "Bigen: The Black Magic ‘Solution’ for Male Baldness". Be the first to comment...