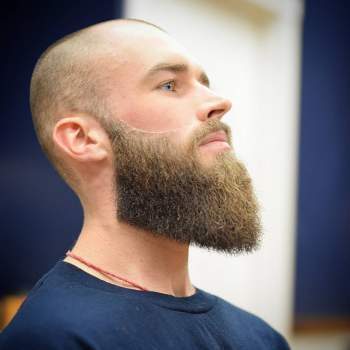 It always sparks joy when Cirque du Soleil comes to town, and its latest Big Top production, Volta, is a crazy-wondrous delight. The show is inspired by amateur street sports, and its theme is the importance of honoring your own true self. But of particular pleasure is how the formal vision of Volta honors Cirque’s own true beginnings as a ragtag street theater troupe. Beard shapes.

Back in the early 1980s—long before Cirque became internationally renowned for its opulently imagined syntheses of music, design, dance, and circus arts—it was simply “a band of colourful characters [who] roamed the streets, striding on stilts, juggling, dancing, breathing fire, and playing music.” So says the official history of this world’s largest theatrical producer. As origin stories go, that’s like saying young Walt Disney liked to draw.

Volta does not lack for breathtaking thrills and stupendous skills, which no Cirque fan would want to miss. But for theater buffs, what’s especially captivating is how this particular work of art reflects a particularity of life: how Volta captures the athletic artistry and boundless energy one sees on the streets in big cities, such as locally among the dance crews who give impromptu shows on sidewalks or in the Metro.

One can read in the faces of Volta’s multinational cast exactly the same ebullience in excellence, the same joy in triumph at a move or stunt well done. Even as they beam at the audience, soaking in the spontaneous applause, their inner satisfaction at their joint achievement is unmistakeable.

This is partly because the makeup design in Volta keeps features human-looking, not phantasmagorical as in many another Cirque production. The result is that emotional recognition is immediate and unmediated, because the performers so freely embody the unadorned spirit of the street.

And unadorned speaks to Volta’s stripped-down scenic esthetic as well. At the beginning the stage is but an empty black box with orange scaffolding above—it’s one of the most inauspicious sets I’ve seen from Cirque. Nothing prettified, nothing otherworldly. The usual preshow clowns are gone as well. Simple street lamps will appear, along with various apparatuses without ostentation, but except for the colorful and sparkly costumes and curious hairstyles, there’s an appealingly approachable down-to-earthness throughout.

One of the early acts, for instance, is a double-dutch routine performed by insanely versatile dancer-athletes who do dizzying flips and tumbles through two spinning jump ropes. Midway, the lighting gets arty; illuminated jump ropes are swapped in and the stage goes nighttime blue. But what’s always in the spotlight is the urban, hip hop street cred of the talent.

Another group number has acrobats diving and leaping through hexagonal shapes every which way. It seems like a competition among them, to see who can outdo whom, but whenever one misaims and topples the hoop, there’s a marvelous rally-the-team moment when all root for the do-over and all exult when the feat is aced.

Two of the big group acts involve major structures. One has a two-story urban building construction with trampolines on either side from which fearless acrobats bound to and fro, over and through the wall between. The other, in the heavy metal finale, has three massive scooped ramps on which daredevil BMX riders swoop, flip, and fly through the air. Among them all there is a cohesion and alertness to one another’s trajectory that would score a best-ensemble nom in a heartbeat.

There are also extraordinary acts featuring solos and duos. A muscular man on a unicycle, for example, balances a limber woman in a handstand above him as he wheels virilely round the stage, both of them smiling effortlessly. Two men do a vigorous arial pas de deux on straps. A woman does a beatific ballet in midair suspended by her hair. Such acts are not technically street sports, but as performed they are imbued with an authentic street-arts ethos, a spirit of victory not in dominance but in virtuosity.

Like many Cirque shows, Volta has a thread of a storyline that strings together the scenes of spectacle and comedy. A character named WAZ competes in a talent show hosted by Mr. Wow and is disgraced and mocked when he is revealed to have blue feathers for hair—which here stands in for every misfit’s secret shame. WAZ withdraws to a humdrum world inhabited by gray automatons glued to their cell phones, but he is rescued by a free-spirited comely woman named Ela who introduces him to a colorful band of street freaks. (Think Hair without the war.)

There are flashbacks to WAZ’s blue-haired childhood incorporating an emulation of 8-millimeter film. A wonderful scene in his boyhood bedroom has a red ceiling fixture that suddenly reappears lit carrying aloft an aerialist (Pawel Walczewski) in heart-stopping contortions.

Along the way there are incidental clown-like sequences featuring a solo performer, who in one scene wrangles hilariously with recalcitrant washing machines in a laundromat. It’s all everyday urban just amped up. And the music by Anthony Gonzalez, of the French electronic music project M83, is absolutely gorgeous, whether sung by magnificent soloists or played by a powerhouse backstage band (see Spotify link below).

Eventually WAZ realizes that what made him different is what makes him unique, and he comes to accept himself and find himself among a similarly enlightened tribe. The message is hinted at in the show’s tagline, “Find your free”—meaning: find your true self to be yourself and you’ll find others who’ll see who you be.

At the end the cast comes out into the audience and high-fives everyone within reach. It’s so cool and so fitting, because dramatically and spectacularly, Volta is unadulterated vicarious liberation.

VOLTA’screative team consists of 13 creators under the artistic guidance of Jean-François Bouchard:

There are no comments for this post "Review: Volta by Cirque du Soleil - DC Metro Theater Arts". Be the first to comment...