How to choose beard style. The Chin Strip, Beard Information 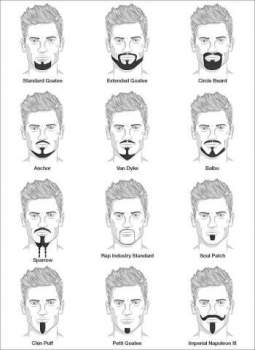 What is a Chin Strip and Why Would You Sport One? Types of chin beards.

Ever wonder what that thin strip of hair growing down a guy’s face under his mouth is called and why he has it there? It’s not quite a goatee, but it is a variation of one. It’s probably the closest a man can have to having no beard at all. Some would classify the chin strip as a long soul patch (small section of facial hair just under the lower lip but above the tip of the chin) that extends down the length of a man’s chin. Sometimes the tip of the strip protrudes past the tip of the chin.

Are There Different Styles of Chin Strips?

Essentially, there are two popular variations of the chin strip beard.

The facial hair forms a vertical rectangle from the middle of the chin just under the lower lip to the tip of the chin.

The facial hair is shaped to a point at the bottom of the chin.

Who Should Sport a Chin Strip?

Some view the chin strip as a stepping stone to growing a full beard. If the purpose is to try out a beard, baby steps are acceptable. If a man simply can’t grow facial hair on the majority of his face, the chin strip is a viable option.

Even though a chin strip is a small section of facial hair, most barbers would advise growing a full beard first and then tailoring the beard through shaping. A full beard allows a man to shape his beard in any style. This also allows the man to ensure that his facial hair will grow in the appropriate area of the face for a chin strip. Amazingly, not every man can grow enough facial hair to even qualify as a beard or their facial hair growth is spotty. It will take at least four weeks for a full beard to form – a minimum of ½ inch of facial hair.

How to trim beard styles

After the man has grown out his beard, he can commence trimming the beard into the chin strip he desires. Essential elements to trimming a beard for a chin strip include:

The man should start by the ears and shave inward, alternating sides.

Shave from side to side once reaching the chin area in order to obtain balance, position the strip correctly in the center, and obtain the proper width of the strip of facial hair. The width of the chin depends on the man’s preference. However, stylists recommend a narrow chin strip – about the width of the man’s nose.

Once the proper shape, width, and alignment of the facial hair are accomplished, an adjustable trimmer may be used to shape up the chin strip.

A chin strip beard is a narrow strip of facial hair running from just under the lower lip to the tip of the chin. Chin strips may be straight and rectangular while others are pointed at the bottom. Growing and maintaining a chin strip can be a tedious process.

There are no comments for this post "The Chin Strip, Beard Information". Be the first to comment...