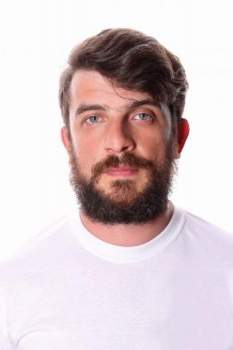 The bearded races of mankind have commonly held the beard in high honor. It is the sign of full manhood; the very young male or the eunuch is beardless, and the bearded woman was considered to be witch. Adam, the primal man, and the God and prophets of many faiths have been traditionally pictured with beards, as were kings and nobles and dignitaries.

Beards have assumed all shapes and lengths, some being cultivated to lengths exceeding a man's height while Islamic people still hold the beard in high esteem.

The earliest records indicate that the highest ranking Egyptians grew hair on their chins.

They frizzed, dyed or hennaed (moderate or strong reddish brown to strong brown), and sometimes plaited the beard with interwoven gold thread.

Later, a metal, false beard or postiche, which was a sign of sovereignty, was worn by queens as well as kings.

This was held in place by a ribbon tied over the head and attached to a gold chin strap, a fashion existing from about 3000 B.C. To 1580 B.C.

An example of a Mesopotamian civilization beard style

Assyrians resorted to a black dye for eyebrows, hair, and beard; while the Persians used henna which produced an orange-red color, a style that existed from 1900 B.C.

Gold dust, gold thread, and scented yellow starch were sometimes used in the hair and the beard for festive occasions.

In ancient India and Turkey, the beard was allowed to grow long, a symbol of dignity and of wisdom.

To cut the beard was infamy among the Turks; slaves were shaved as a mark of servility.

Patriarchs of the tribes of Israel grew beards embellished by a hanging earlock (peyot); the peyot is still worn by some very pious orthodox Jews.

The Greeks and one of their beard styles

Beards predominated among the Greeks until 323 B.C., at which time Alexanter the Great ordered his soldiers to be clean shaven, fearing that their beards would serve as handles for their enemies to grab and to hold the Greek soldier as he was killed.

The Etruscans of northern Italy (about 1000 B.C.) favored the Asian fashion of the long beard, which was eventually handed on to the Romans.

One of the Roman styles of beards

The Romans apparently thought the Greek style of curled beard was too effeminate, and preferred a trim, well-groomed shape.

The use of the razor was encouraged in Rome by Lucius Tarquinius Priscus (616-578 B.C.), in an effort towards hygienic reform.

Shaving did not come into general use until about 454 B.C., when a group of Greek Sicilin barbers went to the mainland from Sicily.

Barber shops were situated on the main streets, but were patronized only by those who could not afford to have slaves.

The Greeks and Romans of the ancient days mostly shaved, and the term barbarous (beard-wearing) was applied for a long period to people who were considered out of the realm of polite society.

Scipio Africanus, according to Pliny, was the first Roman to shave daily.

Philosophers continued to keep their beards.

The Byzantine civilizaton favored beards and mustaches, and the hair moderately short, a combination of oriental and Roman origin, which later influenced medieval and Renaissance Europe.

From the 7th to 16th centuries, the beards of Byzantium were curled, split on the center of the chin, square cut or pointed and some were extremely long.

By the end of the 12th century, the Greek, Roman, and oriental influences disappeared, and the cities of Florence and Venice started to set the style for the courts of Europe.

Until the advent of Christianity in the 7th century, all Anglo-Saxons wore beards; members of the clergy were then compelled by law to shave.

English princes wore mustaches until William I by law (1066-87) compelled them to cut them off in accordance with the Norman fashion.

The Crusades were perhaps accountable for the return of beards, and for more than four centuries great diversity was allowed: beards, mustaches, and shaven faces all coexisted.

The Renaissance fashion in Europe included both clean-shaven faces and beards varying in shape and length.

Many men starched their beards in the 1560s.

In England, Henry VIII (1509-47) brought the beard back into favor in 1535, after which beards of all shapes and lengths were worn.

The Vandyke style became popular for many men

The Flemish painter, Sir Anthony Vandyke (1599-1641) painted so many aristocrats with a pointed type of beard that it became known as the Vandyke beard. They were dressed with pomade or wax, applied with a tiny brush and comb.

Other gadgets were used to keep the mustache and beard in shape while sleeping.

In 1637, Louis XIII triumphed over the Spanish influence when he amused himself by shaving his courtiers, leaving only a tiny lip beard "a la royale" or "la mouche", a custom adopted by the French and Dutch cavaliers.

The "imperial", a pointed tuft of whiskers on the chin, was named in honor of Napolean III, in the 19th century.

In the 19th century, long side whiskers merging into a mustache became known as the "Franz Josef" in honor of the emperor of Austria

During the Victorian period, from about 1840 to 1870, London set the fashion for the world. Side whiskers developed a longer, more luxuriant growth and were sometimes referred to as "mutton chops" or "Piccadily weepers".

There are no comments for this post "Beards: Historical Presentation - Word Information". Be the first to comment...