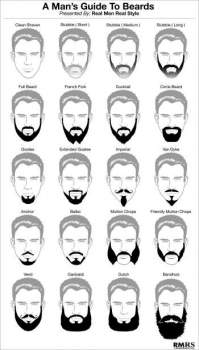 Today facial hairstyles has been one of the top secrets of handsome and gorgeous look, all sorts of creativity has been introduced into facial hairstyles and various styles have emerged, people even sometime tend to associate certain types of facial hairstyles to certain people due to the way it suits and add definition to their face, facial hair can help to enhance certain features on your face, more also gives you platform to even express yourself, hairstyles like the full beard can make you look more distinguished among thousands of crowds, the ones without facial hair are the ones that stands jealous in this scenario, as you know there are some men who don’t have facial hairs like the beard and all that, well specialized hair doctors says its all genetic and depends on the amount of testosterone present meaning the more testosterone you have the more hair you have on your facial skin, and now don’t ask if you can buy the testosterone, the following categories are the facial hair that are styled:

How facial hairstyles adds definition to the face

Many might be wondering why many men keep searching for facial hairstyles, one of my friends famous answer to this is “to impress the ladies” I begin to wonder are the ladies really impress with hairs on men face and mustache, the truth it they might be because when you begin to unwrap the whole thing you get to know the huge definition this hairstyles add on men faces cannot be over emphasized, well I get to know that certain hairstyle are for certain hair shape that’s where a very important factor of the facial hairstyles comes in, it keeps a proper balance of the face as certain men can elongate the shape of the face with a simple goatee and like many of us will agree to that the oval face is an idea face to grow the beard style of almost al types, so if you are having an oval face then you can go on with the game.

A closer look at the types of facial hairstyles

Here we will be talking about most popular and major ones and a list I have here includes:

Now let us talk about this various hairstyle one after the other and I will be pin pointing some historical factor about them beginning with the moustaches since it’s the first hair that appears on the face.

This is the facial hair that appears on top of the higher lips and below the jaw of the nose, its is among the facial hairstyles that gives some men an entirely new look, here we have a record holder the Bajansinh Juwansinh Gurjar of Ahmadabad, India who has the longest moustaches of about twelve feet and six inches long as at 2004, so we can say this style dominates more in some certain parts of the world, like is almost universal and very common in british English and also predominates in the American English, moustaches sometimes can look so very funny, india no doubt has been magnificent and well known for this, below is a funny picture of an india moustache.

Reading his lips I will say: a man without a moustache is like a cup of tea without sugar” so is the saying, I wonder how long it took him to grow such a fantasy.

Hungarian Moustache: this usually begins from the middle of the upper lips and goes to the sides, creating some kind of partially ‘U’ shape it has remained a national identity of the Hungarian since when the Hungarian hussars defended their homeland from invasion of the ottoman empire.

Dali: this is an example of identifying people with certain facial hairstyles, back then in the late 17thcentury Dali grew a very flamboyant moustache and as since then been known for that style, he was a prominent Spanish artist and also had good contribution in theatre and fashion as a whole, the shape of the Dali moustache can gain description slightly close to that of the Hungarian moustache but much more longer and thinner across its end, and does not begin from the centre of the upper lips, it creates a concave and convex shape on the chin

· Imperial: to grow this style facial style hair has to be grown only on the upper lips and chicks and it should point upward, but not curled over, the fascinating style of the German Karl-Heinz Hille tells it all.