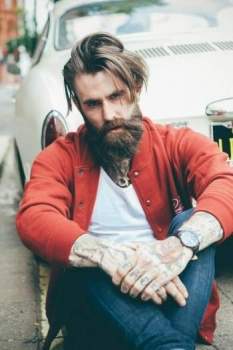 It’s time for another Wisdom Wednesday. To celebrate the launch of the all new Uppercut Deluxe Beard Balm, this week we’re going to be delving into the fascinating history of beard styling. Go t beard styles.

Beards have been around for as long as mankind itself. From wild and woolly to short and refined, beards have never stopped changing, and a man’s facial hair has always been subject to different style trends. With quality products such as beard balm on their side, modern men have an advantage when it comes to styling their facial hair. However, there was a time when tangled beards were all the rage.

In some ancient Chinese societies, trimming one’s beard was seen as a sign of disrespect. Facial hair was considered a genetic gift, and men were encouraged to grow it as long as they could. The ancient Greeks saw long beards as an indication of virility, while clean shaven faces were considered weak, and men would only trim or shave their beards as a mark of mourning.

The Chinese would grow their beards out with trimming them seen as a sign of disrespect. Photo via Popular Beard Styles. On the other hand, Lebanese men were all about beard care, using beard oil and hot tongs heated in fire to create intricate ringlets. During the Middle Ages, beards were especially popular amongst knights and noblemen, who saw it as a symbol of honour. Men were very protective of their facial fleece in those days, and it was considered highly offensive to even touch another man’s beard, often resulting in violent duels.

During the Renaissance beard styling got a little tamer, with clean shaven faces gradually became more mainstream. Beards were considered old fashioned during this time period, especially in Europe. Peter The Great, the ruler of Russia at the time, even went so far as to ban men from growing beards, in an attempt to keep up with Western European standards. Thankfully, facial hair made a comeback during the 1800’s, with many of the worlds most powerful leaders choosing to sport a beard that could rival any modern-day hipster.

General Burnside during the Civil War in the 1800's. Photo via Seventeen Sixty These days, with so many beard products for men available, facial hair can be shaped to suit the style and taste of every individual. Make sure you check out our Uppercut Deluxe Beard Balm. We know that keeping an epic beard in shape is no easy task and that a great beard doesn’t just happen by accident, so we decided to make something that can help.

There are no comments for this post "Beard Styling History - Uppercut Deluxe". Be the first to comment...