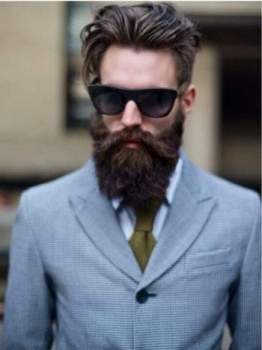 Many experts in the field of brands and image perception say the ace pilot has emerged as a hero and a "Brand Abhinandan" from the tumultuous circumstances under which he landed in Pakistan and returned to his homeland.

The country is in admiration of the bravery of Wing Commander Abhinandan Varthaman, but his rather characteristic gunslinger moustache with mutton chop beard style has also become the talk of the town. After his return from captivity in Pakistan, many Indians want to sport the ‘Abhinandan style’ on their faces in a nod to the IAF pilot’s emulable bravery and courage, whose face had become the cynosure of all eyes in the last few days. New trend beard style.

Many experts in the field of brands and image perception say the ace pilot has emerged as a hero and a “Brand Abhinandan” from the tumultuous circumstances under which he landed in Pakistan and returned to his homeland. The social media is abuzz with “Abhinandan moustache style” and now many are hankering to sport it.

Ishwar Dayal, a Twitter user wrote, “I want a moustache like Abhinandan. Jai Ho.” Raunak Jalan, another user of the microblogging site, said, “Abhinandan’s moustache will be the next styling sensation throughout India. Don’t be flabbergasted by the fact when the barber asks you ‘Abhinandan cut chahiye?'”

Brand strategist Ramesh Tahiliani describes it as a rise of brand called ‘Abhinandan’ and the circumstances surrounding it has made him in fact a “Superbrand”.

“Patriotism and other emotions are running high at the moment. And if you ask anyone to imagine pilot Abhinandan after seeing him on TV or internet and ask what’s the first thing they remember they are likely to say his beard and moustache,” he said.

Tahiliani says hearing about bravery now so many “want a piece of Abhinandan” as an act of emulation. After he was captured, Varthaman showed courage and grace in the most difficult circumstances for which he was praised by politicians, strategic affairs experts, ex-servicemen, celebrities and others.

“Now his courage and bravery in the face of such gruelling odds that ordinary men may not be able to emulate in real life. So they try to absorb some other qualities and in Abhinandan’s case, his beard is the most identifiable trait which now symbolises pride and valour,” he told PTI.

So they literally want to wear that pride, he said, adding that, however, it is a “fad” or a “temporary fascination” as of now and only time will tell if it actually translates into a fashion. From his captivity to release on Friday, capping around 60 hours of tense moments and escalating tensions between India and Pakistan, his proud smile emerging out of that thick moustasche, left an unmistakable stamp on people’s hearts.

According to information shared on beardstyle.net, Varthaman’s style can be described somewhat a mix of a gunslinger moustache with mutton chop in beard area, which the website says “help to create a historically masculine look”. “Abhinandan became a hero the day reports of his captivity emerged and then as more details came out about the dogfight and how he downed an aircraft of the adversary in his MiG-21 his heroic imagery reached a pinnacle,” said another brand expert, who did not wish to be identified.

By the time he returned home to a hero’s welcome and rightly so ‘Brand Abhinandan’ value had reached several notches higher. And that is why people wish to imitate his looks and style, more so the beard and moustache, he said. The IAF pilot returned two days after he was captured following a dogfight when his MiG-21 was shot down.

“His luxuriant moustasche flows across his face like a smooth trajectory of an aircraft deftly manoeuvred across the sky. The moustache is very much part of that brand that people adore, idolise and wish to own,” the expert said. Tahiliani said Abhinandan is an “enduring brand” as he carries with him the legacy of his family who have served the IAF and the values espoused by the IAF.

“So if you looked at his eyes and facial expressions one could sense that here was a man who could not be broken, could not be shaken, and will stand firm, guided by the values he is raised and trained with,” he said. But this phase would be, what in brand parlance is called a “fad” or a “temporary fascination” and has happened before also.

“In the movie ‘Pink’ Taapsee Pannu’s character wears that tattoo on her shoulder, showing a flight of birds. Lot of girls started following that after the film. But it takes time for a style to become a fashion,” the brand strategist said. Brand Abhinandan popularity can be gauged from the fact that industrialist Anand Mahindra has tweeted a digitally-made sketch of the pilot’s face showing just his hair and moustache in monochrome, with a message: “Welcome back Wing Commander. Your fellow citizens are the wind beneath your wings…”

Another user, @OnlyForMySelff, posted, “Dear Boys & Men of My Country.. Many of U might hv tried al kinda styles of moustaches especially Ranveer’s Bajirao Style etc al r now interested in keeping moustache like Our REAL HERO #Abhinandan?? M sure You al wl look Super Smart if U do so. #AbhinandanMyHero (sic).” Many also used tongue-in-cheek humour to convey the sentiments. “I love how no one is acknowledging #Abhinandan’s double wings. His IAF wings and his moustache wings. #justsaying,” @DFahulavaanu tweeted.

There are no comments for this post "Wing Commander Abhinandan s gunslinger moustache is the latest style trend - The Financial Express". Be the first to comment...