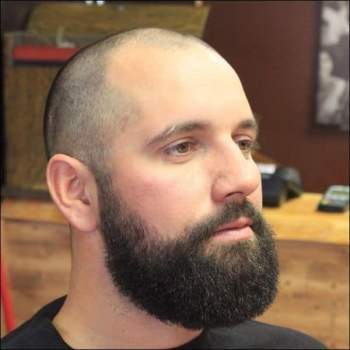 You may look at beards and think, “ok, cool. That’s called a beard!” but what you don’t realize is that there are a ton of different beard styles. If you want to become a connoisseur of sorts, you’ll want to look into the various styles, what works for your face shape, and how you can take your facial hair to the next level. Each type of beard shape is categorized into another shape. Let’s take a look below: Round beard styles.

Those who have a square jawline will ultimately want to take advantage of a square beard style and should look into how each one of these could shape your face.

Circle beard – The circle beard features a chin patch, and has a mustache that encapsulates to form a circular shape.

Royale beard – The Royale beard is simple a mustache that also features a type of chinstrap / soul patch combination.

Goatee – We’re pretty sure you already know what a goatee is, but it basically is a small beard on your chin that takes a U-shape. You may also see a soul patch underneath this, depending on the preference.

Petite Goatee – Maybe you don’t want something as extreme as a normal goatee, as you don’t want to look like you listen to Creed constantly. Instead, you can trim the opposite shape just to give a bit of hair along the chin and in the center of the chin.

Van Dyke beard – This one combines a goatee with a mustache – but they aren’t attached!

Short boxed beard – A short boxed beard is a beard that’s thin, and features sides that are trimmed and on the lower side. You won’t see this type of beard with hair entirely covering the chin, or halfway up the cheeks.

Balbo beard – This beard is a type without sideburns, and features a detached, floating mustache.

Anchor beard – Want a beard that’s a bit sharp and subtle sculpts the jawline? Check out the anchor beard, which traces your jawline and features a detached mustache.

Maybe you’re someone who’s into the campier beard styles. If this is the case, check out these oval beard styles, great for those that have oval-shaped faces.

Horseshoe mustache – You know those crazy cowboy mustaches that are silly looking? The horseshoe mustache is just that. With two lines coming down from the mustache and shaping the chin, the “long bars” typically point downward to create this chin shape.

While these aren’t the only beard styles, these are most of the lot! Of course, there are more creative people out there, but this is a great start for those looking to get serious with their beard/mustache.