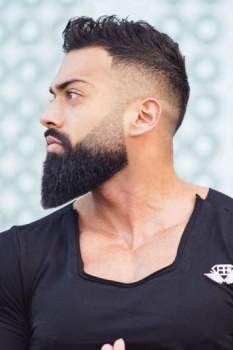 AskMen conducted a study using Google Trends to find out what beard styles states search the most. Surprisingly, it turned out that being clean-shaven isn’t as popular as most people would believe. Growing mutton chops, on the other hand, seems to be on every region’s wish list. Who knew looking like Wolverine was a trend! What beard style.

Ever wondered why men in 2017 favor macho beards over baby butt smooth shaves? Well, wonder no more as we’re here to solve your dilemma. You see, a man’s facial hair is an important stylistic feature. It reveals personality, enhances confidence, and adds a little extra edge. Understanding the significance and larger meaning of beards, we thought it would be fun to find out what the most popular beard styles are in America. So we turned to our friend Google Trends…

But before we go into the nitty gritty, let’s reiterate the fact that maintaining a beard requires work, a lot of work. So if you plan on rocking some fancy facial hair, you’re gonna need a pretty decent razor for all the shaping, trimming, sculpting, and designing.

The goatee takes first place as the most searched beard style. All 51 states have shown search interest in the last year, particularly North Dakota, Vermont and Rhode Island. This is actually not that surprising when you think about it. George Clooney, Brad Pitt, Leonardo Dicaprio, and many other good-looking fellas are often seen sporting the classic goatee. And who doesn’t want to look like an A-list celebrity, right?

Second place goes to sideburns, with over 47 states Googling the term. The South - led by West Virginia and Kentucky - is particularly into this trend.

Third place is awarded to ducktail with interest shown by 37 states, Indiana being number 1. At first we thought to ourselves, ‘why would someone want his beard to resemble a duck’s tail? Why? Just why?’ But then we looked up some photos and that’s when we were like, ‘Oh yeah, we get it now.’

In fourth place, mutton chops garners interest from 35 states especially Pennsylvania, Kentucky and Tennessee. Although many would argue that mutton chops look better on a plate rather than on a man’s face, unless that face looks like Hugh Jackman, which would be a totally different story. Obviously.

To end our Top 5 list we have the soul patch with 25 states. You know that little tuft of hair just below the bottom lip? The fine little hairs that allow teenagers to buy their first beer? Yeah that. Virginia, Pennsylvania and Michigan, we see you.

We were curious to hear what experts thought of all this. The team at the popular shaving subscription service Harry's sent us this note: "We love the personality and individuality expressed in all of these beard styles! Our office is in New York and as the survey correctly notes most of our guys sport a clean shaven face, so we are a bit surprised at how popular beard styles are around the nation. The most popular beard trend in our office is the 5 o'clock shadow."

Circle beard: Only residents of Pennsylvania and 5 other states (Illinois, New York, Florida, North Carolina, and New Jersey) are intrigued by the moustache and rounded goatee combination.

Balbo: California seems to be the only state aware of this beard style.

Clean shaven: Only New York and 2 other states (California and Texas) are interested in baby butt smooth shaves according to Trends.

The days of rocking a hair-free face are sadly almost over. So if you suffer from pogonophobia, which is a fear of beards – and yes that’s an actual thing – then you’re going to have to contemplate a voyage to another planet. Sorry to break it to you like that.

There are no comments for this post "AskMen Study Reveals What Beard Styles States Search the Most - AskMen". Be the first to comment...