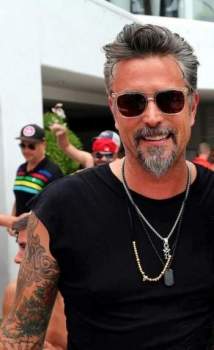 A renowned actor who’s proven himself in many masterpieces like the remarkable “Legend“, the brutal “Bronson” or the ruthless, shrewd and conniving “The Revenant”.

A thriving producer and co-writer of the popular imaginative drama “Taboo” in which he himself plays the main role of James Delaney.

A beardguy who wore all the different beard styles through the years with pride and honor and if I may say, he was/is wearing them tight.

Ladies and gentlemen, with great pleasure and without further ado we give you this month’s celebrity beard – Tom Hardy.

No matter if it’s an untamed, full-sized comfy beard, perfectly trimmed stubble or a mustache and goatee for Tom Hardy there is no style he can’t cope with.

He’s even invented his own! Just keep reading, you’ll see it!

In this unfortunately short list, I will try to summarize the top 15 beard styles and we’ll start out with:

The combination of all those numerous beards styles eventually led to the creation of the Tom Hardy beard style, a mix of several styles made to emphasize the virile man. It consists of a strong, well-nurtured mustache and goatee with a finely trimmed side and a fade out at the cheeks.

In my opinion, this classic/regal look should be worn with great confidence and self-esteem to achieve its maximum potential. If you are able to do it, I guarantee you a glamorous result.

The Revenant’ movie Premiere in LA on Wednesday 16th December 2015

VirileBeard’s Celebrity beard of the month

Although isn’t technically a beard; I quite like how Tom nailed the pointy, English mustache in ‘Bronson’. He did his best to portray Michael Peterson aka Charles Bronson in his true nature, physically and mentally. This particular style is actually a substyle from the original Handlebar mustache style.

Charles Bronson – the man dubbed Britain’s most dangerous prisoner – has chopped off his iconic mustache and sent it in the post to Hollywood actor Tom Hardy as gratitude for the great portrayal. As Bronson said “Tom looks more like me than I look like me. He looks awesome and I’m so f****** proud of him”.

The ever-present mustache gives him the tough look, but without them and with a light stubble darkening his jawline Tom looks like one happy teenager partying at the beach.

The beardstache can be also labeled as the facial hair version of the mullet (and roughly as attractive). Unfortunately, that was the trend back in 2015.

Tom Hardy arrives at the Diesel U-Music Awards held at KOKO on October 3, 2007, in London, England.

Many beardsmen consider the Ducktail a perfect compromise between the wild characteristic of having a beard and well-groomed sophistication.

A full goatee that has been trimmed back considerably around all areas to form a thin line mustache giving you a nice tidy look.

There are no comments for this post "15 Tom Hardy Beard Styles Over The Years - Beard Of The Month - VirileBeard". Be the first to comment...