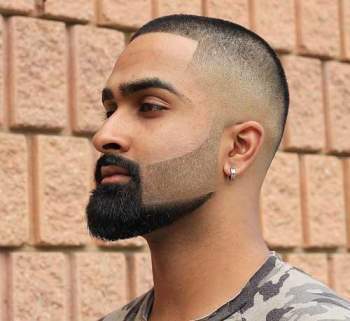 French Beard Styles For Indian Men. Among one of the most high-on-demand beard style among Indian men is French beard style which is due to the reason for low maintenance and easy to grow a beard. All a man has to do is to grow out a mustache that will be connected to the curve of the beard growing under the chin and around lower lip. Beard cut design.

Many Indian superstars from different age groups like Amitabh Bachan, Shahrukh Khan, Ranveer Singh, Hrithik Roshan and many more are not only fond of having a French beard but they have themselves spotted with French beard style many times by Paparazzi on various public and private events and ceremonies. Indian youth have gone boundaries to copy the same French beard style in order to get the same gem to look like their Indian superstars. Having a beard helps you to make your routine hassle free.

Whether your facial hair turns out to be black, brown or grey, having a French beard will never go wrong that is why it is the most popular style in the east as well as in the west. However, one can try multiple styles with French beard to further brighten up their day to day look because French beard is a style that encircles area around your mouth blessing you with head-turning looks. Upcoming below are plenty of French beard styles that you love to adopt!

Getting French beard style has now become one of the hottest Indian trends this year. In fact, French beard trend is not limited only to India and it has now crossed borders and tingled every men heart around the globe. Following are few steps when followed will result in healthy and quick French beard growth.

Use specific shampoo for your beard hair and keep beard hair untangled and cleaned. If you are unable to keep them clean, it’s better to have a clean shave rather than a smelly French beard.

Trim your beard properly and frequently and the beard should not look more rough, messy or untidy.

It’s better to check your workplace policy on having a French beard.

It is preferable to keep a separate comb for your beard and always keep the beard comb with you. You should also check out these 50 Popular Goatee Beard Styles for Different Face Types.

Powerful men have adopted Van Dyke beard and continue to wear and maintain it. Inspired by the famous artist named Van Dyke, this classic French beard style has been opted by many men around the globe and all have rocked the look so far! So giving a heads up to try this look today. However, modern styles have no specific parameters to follow for but all to be grown in natural ways.

W-shaped French beard can be grown in thick and thin styles separately and that purely depends on your choice. In order to form the W-shaped beard, one needs to grow a soul patch that leads to lips. It is important to have a patchy disconnect between the French beard and the mustache that will prevent the style from looking too thick and heavy. Without French beard, the look of a man remains incomplete.

Dying to get rid of real bad boys look? Go ahead for opting thin but dark colored beard. Make sure to keep facial hair trimmed around the edges and clean shave any extra stray facial hairs so that overall look can become more sharp and sleek.

A real intense manly look can surely be created with thick and wide French beard style. It is preferred to use dark colors of facial hair and here you get dark, tall and handsome bold masculine look that you have been craving to get!

Not into much thick French beard? Want to avoid too many manly looks? You can give a trim at morning to keep the length short and for a clean look. Here are 20 Best Facial Hairstyles For Indian Men.

Want to opt for the friendly look without being clumsy? Giving a round shape keeping the edges of curves much softer. With such French designed and styled beard, avoid an intense patchy disconnect between your mustache and beard.

Want to regain your sex appeal with some bolder look again? If you want to strengthen and uplift your face and jawline then prefer having square French beard. You can take help from trimmers to create the best angular sections at all the four corners of the French beard. Straight edges of French beard will help to make your square beard style look more perfect.

Going towards your 40’s but confused what to opt for? We would recommend you to go for a white beard or light brown shade. You can use special beard dye colors to get a uniform shade. The growth of hair can be improved by using regularly beard hair oils and by maintaining super standard facial hygiene.

A beard which is cropped close to your lips is named as tight French beard. In order to maintain the tight French beard style, you need to crop the beard tightly around your lips so that your facial features and bones structure can be more highlighted. Moreover, the dark-colored beard will intensify your overall look supported by more manly features.

Bohemian Facial Beard style can very easily be translated into French beard style. All you have to do is to surround your soul patch with a real wide French beard so that your masculine style can be maintained.

How to do beard style

Want to avoid the thick intense French beard? The tip here lies in keeping your beard look really thin, sleek and manicured as this style is friendly and open.

Joining your sideburns, this amazing French beard style using a chinstrap is just the right way to show off your hardcore masculinity.

Do you have a skinny outlook and want to ditch skinny look? You need to only grow a section around your mouth so that the longer and fuller look can be made just for you.

For those facial hairs, that have started to turn grey while few remain black can opt for Salt and Pepper French beard style. Here are 23 Best Tips on Styling Short Beards.

An anchor French beard style is one which has a slight disconnect between the upper and lower portion which look like a reflective anchor shape of the cut.

The Bollywood King Khan couldn’t be able to ditch French beard style. Feel free to copy Shahrukh Khan’s French beard style and don’t forget to admire him. A man can appear clumsy, lazy or sophisticatedly eccentric just by the type of beard that he chooses to keep and maintain. Other than Shahrukh Khan and Amitabh Bachan many Hollywood leading celebrities like Brad Pitt and Johnny Depp have played an important role in popularizing French Beard style as their fan following is around the globe.

A semi-formal French beard style of Jeremy Renner that covers almost all chin area with the mustache being sharply and neatly trimmed but the chin area and mustache should not have to be connected with each other and that is how Jeremy Renner has been rocking the whole look from over the years and many years to come!

↓ 05 – The Signature Style of French Men

Looking for a sexy, classic and mature look all wrapped up in one? We bet that women from every part of the world will drool after you will opt for Ryan Gosling Signature French beard style. Don’t miss out these 20 Best Patchy Beard Styles for Indian Men | Tips and Styling Ideas.

Royale French beard is a French-styled beard that consists only of mustache and a long but thin soul patch on chin below the lower side of the lip. The neater and trimmer the royal French beard, the more handsome you will look. Rest of the face should be cleaned shaved to give cleaner look and bringing all the focus on the royale styled French beard.

A very similar style of chinstrap being paired with a closely trimmed mustache is what most men called classic French beard. Classic French beard is more of a fuller look but with the cheeks being cleaned shaved along with extended sideburns to envelop our jawbone to your chin. The length should not be too long or too short but the facial hairs of classic French beard should free flowing or loose as it will spoil the neater gentlemen look and can lead to a clumsy overall.

French beard in Lagaan style inspired by Aamir Khan is another most adopted style by teenage boys. As far as Aamir Khan French beard style is concerned, it consists of a soul patch under lower lip and on the chin. The cheeks and the jawline should be shaved neat and clean so that a sleek and stylish look can become more apparent on your face.

How to Take Care of French Beard

Beard hygiene is the most important factor for all beard adopters. No matter what type of beard you go for, it is mandatory that you keep your beard clean as a smelly, untidy and uncleaned beard can be a source of tons of bacteria which can cause many skin infections. The first symptom of a bacterially infected beard is constant itchiness that you feel every time. It is preferable to wash your beard every day with beard shampoos and after shampoo, conditioner can be used only after getting oiled with beard oils available easily at your nearby markets. After washing beard, you can gently dry it off with a separate towel especially used to dry beard. After drying, always untangle your beard hairs especially if you have long beards. Use a separate wide-toothed comb to untangle hair of your beard. You can use beard waxes and oils to keep beards really well-groomed. Regular moisturizing of French beard should be done once in a week depending on your skin type and your locational weather of living.

There are no comments for this post "25 Best French Beard Styles for Indian Guys". Be the first to comment...