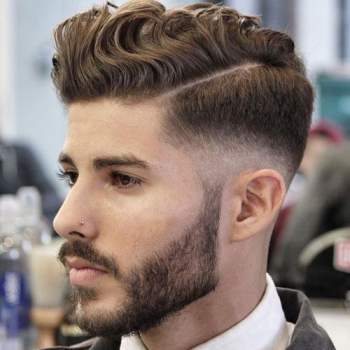 Your facial hair is an extension of you, and a sign of the times we live in. Dadhi hair style.

Throughout history, facial hair has been an indicator of identity and status – from Egyptians and Romans, to pirates and cowboys.

We’ve taken a look back through the decades to find out the significance of some of history’s most popular styles. You would be here all day if we started at the beginning, so we have picked up where Dorco began its journey – the 1950s.

No matter what style you go for, make sure you maintain it properly. Read our blog for tips on how to shave without causing irritation or razor bumps.

Other than a couple of exceptions, such as Salvador Dali’s moustache, facial hair held less cultural currency in the 1950s than it would in the following decades. This is perhaps characterised best by one of the era’s most iconic figures – Elvis Presley.

Known around the world (or around the clock?) for his snake hips and revolutionary music, his clean-shaven face also helped to show off his signature curled lip.

He would remain this way for MOST of his career – more on this later.

Origins: Shaving was popularised around 330BC during the reign of Alexander the Great. His soldiers shaved their heads and beards to give enemies less to grab during combat.

In the 1960s, counterculture, from beatnik poetry to psychedelic rock ‘n’ roll, catapulted towards the mainstream.

Beards, horseshoe moustaches and sideburns became essential for burgeoning bohemians and hippies who wanted to sport the samelook as their idols, for example The Beatles, Frank Zappa and Allen Ginsberg.

Origins: Examples of artistically influential facial hair can be found in the 17th century, thanks to a hugely successful portrait painter named Sir Anthony van Dyck. He painted various kings, queens and princesses including Charles I, who was well known for his very dapper facial hair.

Not even clean-cut Elvis could resist the allure of sideburns in the 1970s. Everyone, from pop musicians and actors to journalists and footballers, had them.

At the same time, the decade was pretty diverse in its facial hair fashions. Moustaches, goatees and full beards were not uncommon, but they were all usually accompanied by sideburns, as well as longer hair, and of course some flared trousers.

Origins: In the 19th century, American General Ambrose E. Burnside was widely known for his facial hair – a moustache and mutton chop combo, with clean-shaven chin. They were initially known as Burnsides before, over time, being switched round to the term sideburns.

Throughout history, moustaches have been no laughing matter. In fact, British soldiers in the late 19th century could be imprisoned if they did something as outrageous as shave their moustache.

Perhaps one modern man understands this commitment to the moustache more than others. Tom Selleck has almost single-handedly embodied the style since the 1980s, making it famous during his time as the lead character in the hit US crime drama ‘Magnum PI’.

Origins: Although they became standard issue for British Empire officers in the 1800s, the Oxford Dictionary says the first recorded use of the word ‘moustache’ was found in a 16th century translation of a French travel book.

From the Backstreet Boys to NSYNC, right through to Brad Pitt, this minimal facial hair style was all the rage in the 90s. The name ‘goatee’ is inspired by the long fur under a goat’s chin, while the soul patch points to the tuft of hair below the lip.

It could also be found in various forms, from a full goatee, to chin hair with no moustache, or complete with a chin strip.

Origins: Alongside the aforementioned Charles I, the popularity of moustaches and facial hair styles was encouraged across Europe by a bizarre ‘beard tax’ imposed by Russian Tsar Peter the Great in the late 16th Century, which taxed people who had full beards. The soul patch, meanwhile, was popularised by American jazz musicians in the early 20th Century.

With the turn of the millennium, it was all about starting afresh. Designer stubble, also known as the ‘5 O’clock Shadow’, grew in popularity as celebrities such as George Clooney went for the ‘shabby chic’ look.

Origins: It’s hard to put a date on a look that a look that comes from essentially not shaving for a couple of days, but the phrase ‘5 O’ clock shadow’ comes from a 1930s US-based marketing campaign.

The facial hair style that is comfortably the most synonymous with this decade is the full beard, or the ‘hipster beard’, often accompanied by a bun hairstyle, labelled a ‘man-bun’ by some.

Rather than just not shaving, it is sculpted with scissors and maintained with oils.

Origins: Historians speculate that prehistoric men had beards for reasons beyond the fact they were more difficult to get rid of. They also served the purpose of making a man appear more intimidating to his opponents. Additionally, they acted as status symbols within many early human civilisations.

Given the cyclical nature of fashion and trends, we can expect the full beard to be replaced in coming years by a new trend. Perhaps we’ll go back to the days of clean-cut Elvis Presley?

There are no comments for this post "Facial hair through the ages, Dorco UK". Be the first to comment...