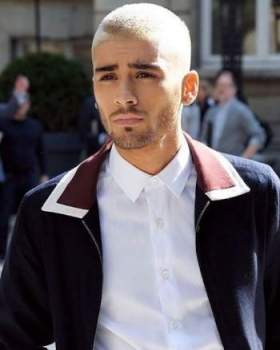 Beard Style For Every Face Type | No Shave November Hangover

What men’s hairstyles look best with beards? Hair can be any length and so can the beard. It really depends on the hair more than the beard. Anything that works with for your hair type and face shape is still the best bet. Shave styles 2016.

Cool men hairstyles with beards can be anything from a shaved head to long hair and any length in between. Fades look great with beards too because they can seamlessly transition into facial hair.

If you’re not sure, get your beard trimmed along with your haircut so it all works together. Then you can keep up the beard shape until your next cut.

The Balbo is among the most popular beard styles these days. Robert Downey, Jr., a renowned American actor who starred on top grossing films such as The Avengers and Iron Man, has been maintaining the Balbo look for years as it matches his features pretty well.

You need to grow a full beard in order for you to have ample hair for shaping. Do not shave for 4 weeks or until the beard has fully grown. You also need to grow a mustache. It requires careful sculpting so you need good razors to achieve the look. You can use a disposable or an electric razor to take off the hair on the sides, and a straight razor to shape the Balbo beard style appropriately.

The Bandholz beard style was popularized by Eric Bandholz, founder of Beardbrand. He was into the corporate world until he fell in love with beards. He got negative comments because of his drive to grow his beard until its limit, thus, he has quit his job and decided to put up Beardbrand.

Beardbrand was just a community before. Eric posted blogs, YouTube videos, and Tumbler entries to provide information to enthusiasts who would like to keep their beards at its finest condition. Later on, he has decided to turn it into a business by offering high-quality products that really work wonders. From beard oils, washes, and softeners, to scissors and combs, the Beardbrand is certainly a one-stop shop.

Growing a Bandholz require patience. At first, you will look patchy and unkempt especially during the first 4 months. You need to have the patience to keep it untouched. Throw away your razor and scissors; you won’t need them for months. Just let it grow until it reaches the maximum length you can genetically grow. You can start shaping and cutting it 7 months after, or you can keep it as it is,

depending on your preferences. What is nice about the Bandholz is that you can keep it freely unlike other beard styles.

Well, most people would rather not grow their facial hair as it looks clean and tidy. It will never be out of trend, especially if you are part of the corporate world which will require you to look at your best. In fact, according to some surveys, women prefer men who shave.

Go grab your trimmers and razors – a disposable, an electric or a cartridge, just take off that growing facial hair!

Also known as the “standard” beard, the circle beard is a combination of mustache and rounded goatee beard styles. It looks tidy, thus, making it a good option for men who would like to look presentable without letting go of their beard.

Make sure that you have grown a reasonable amount of hair to avoid over trimming or shaving. It would be best to visit a salon to perfectly achieve the circle shape as it can be a bit fussy. As soon as you have acquired the right look, you can do the succeeding trimming and shaving on your own.

Also known as the tailback or the Hollywoodian, the extended goatee is a combination of a goatee and a mustache. The style is different from the full beard as you are taking off the hair on the sideburns.

Make sure that you have grown medium stubble before shaping your beard. Take off the hair on the sideburns and adjust the width according to your preferences. Do not take off your mustache.

The friendly mutton chops are also referred to as the sideburns, sideburns or side whiskers. The term “sideburns” was derived from Ambrose Burnside, a renowned American Civil War general.

The manliest and much preferred by men among all the beard styles, the full beard is certainly something you must not miss this 2016! Well-groomed full beard is more attractive as it accentuates your features better.

Are beards in style

The full beard depends on your genetics. If you grow hair all over your face, then achieving it is easy. You just have to let the hair grow until medium stubbles and shape it evenly using a razor. Stop shaving until 6 weeks so as to attain the look. Trim right after to maintain the length.

Do not have ample time to keep your beard looking kempt? The Garibaldi is perfect for you! It is a bit shorter than the Bandholz, thus, trimming it once in a while is required.

You have to grow your beard for months, about 4 months depending on how quick you grow your beard, until it reaches 15-20cm. Trim and shape the lower area from time to time to make it look round. The mustache’s length is something that you should also keep neat as the focus should be on the beard. No styling aids required as it has to look natural.

The Imperial became popular during the Second Empire. It is not actually a beard style but a mustache. However, you can incorporate it with your sideburns or chin beards, like what Mel Gibson has done on his beard. Just make sure that you keep the beard simple so as to keep the imperial mustache as the highlight of your face.

Do not shave for weeks, or even months, until you have acquired whiskers that are long enough to be shaped. Some enthusiasts say that they had to wait as much as 3 months until they have successfully achieved the look.

Shave your sideburns or the hair near your mustache. Never trim! Make sure you’re your mustache looks natural, so even if it disturbs you from eating well or if it falls from time to time, resist the temptation of trimming to successfully have the Imperial look. Now, start curling the ends. You can use beard oil or mustache wax to keep its curl.

The simplest among all the beard styles, the short stubble is something that you can easily maintain as there will be no “special” method just to achieve the look. It looks manly yet does not make you look untidy.

Just don’t shave your beard and mustache for 1 to 2 days. After that period, just trim it to keep its short length. If you grow hair above your cheeks, just shave it habitually to maintain the look. You can also shave the hair growing on your neck area, keeping the stubbles focused just around the lower area of your face.

Well, if you don’t want to trim your short stubble, then you have to say hello to medium stubble. If you think you look better on it, just once again keep the hair trimmed until it’s 3 to 5mm long. It will probably make you look scruffy a little bit, but if properly maintained, it will surely bring out your machismo image.

Make sure that your beard doesn’t go beyond your cheek and neck area, so trim or shave all those excess growth. Keep the length no more than 5mm so you should have a good trimmer as you will use it at least once every week.

Measuring about 6mm, the long stubble is kinda tricky to maintain compared to the short and medium counterparts as it has to be trimmed well to get rid of stray hairs, especially those that grow on the cheek and above the Adam’s apple.

Do not shave your beard for a week or two, until it reaches 6mm. Keep it well trimmed so that it will look like a “shadow” on the lower third area of your face. Make sure that you get rid of the stray hair using a trimmer or shaver.

This beard style was derived from a popular Flemish painter from the 17th century, Anthony Van Dyke, as it was his signature look. It is a mixture of a goatee and a mustache, with a much delicate precision.

Wait until your beard becomes long stubbles. Slowly shape your beard using a good shaver. Shave off all the hair on your neck, cheek and sideburns. Leave your mustache untouched. Shape your beard on the chin area by forming an inverted T. Let the beard on your chin grow until it reaches about 2 inches. Trim once in a while to achieve the V shape.

Taking care of your beard should be done appropriately. Longer beards require thorough care to keep it resplendent. Keep in mind that you have to keep it clean at all times as it can be a good haven for bacteria, thus, making you susceptible to infection. Washing it regularly using a mild shampoo and conditioner will keep it soft and clean. Using a conditioner is also advisable. After washing, gently dry it using a soft cotton towel. If there are tangles, use a wide-toothed comb. You can also use beard oils and waxes to keep it well-groomed.

We hope you have successfully found what you want this 2016 with the help of our list of beard styles.

There are no comments for this post "Commendify, Beard Style For Every Face Type, No Shave November Hangover". Be the first to comment...