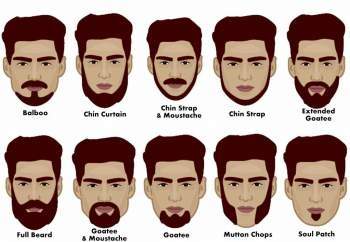 William Shakespeare’s opinion about beards: “He that hath a beard is more than a youth, and he that hath no beard is less than a man.”

In a culture where clean-shaven faces are the rule, a bearded man might be considered a renegade. In other cultures, a well-maintained beard implies wisdom and academia.

Untamed facial hair might be the hallmark of a wild spirit — a Bohemian artist, perhaps, or a brilliant scientist who doesn’t care about societal norms. Or it might be the product of abject laziness.

A beard can hide wrinkles and facial flaws, or make a young person appear more mature. It won’t defeat facial-recognition software, but a misinformed fugitive might not know that. Story prompt?

And watch out for the bearditude on that hunk sporting his meard. His testeronish attitude might be less than mandorable.

Any emotion involving chin movement will affect a person’s beard. Scrutinize the following list. Each emotion includes a chin or beard movement, followed by an example of complementary body language.

Raised chin while looking down the nose

Chin supported on knuckles of one hand

Fingers supporting chin or side of jaw

Chin lowered to the chest

Lips pressed into a thin line

Good writing and poetry engage readers with imaginative similes and metaphors. Avoid excessive repetition of like, opting instead for indirect comparisons.

A promise of a thorough tummy tickling

More pedantic than his writing

Anything that touches the lips or chin transfers its scent to beards. Here are a few idea starters.

An upscale barber would likely refer to beards by their official shapes and style names. Someone less informed might devise descriptors such as shovel-shaped or pointy.

More than hairy objects sitting on a man’s chin, beards move, cause sensations in their owners, and evoke emotions in others.

Some of the words here would be suitable for urban fiction or dialogue.

Does your character have a condition that makes his beard itchy? Does he spend an hour in front of the mirror every morning grooming it? Maybe he works in a factory where it gets trapped in machinery. Or maybe a woman wears a false beard and tries to pass herself off as a male.

Avoid the following and similar expressions whenever possible, or invent new phrases.

You could replace biker’s beard with a descriptor that incorporates a specific make of bike. The make could lend humor, intrigue, or fear. There’s a huge difference between a scooter and a Harley.

Five o’clock shadow? Passé. Consider George Orwell’s 1984 opener: “It was a bright cold day in April, and the clocks were striking thirteen.” Maybe a protagonist could sport a twenty-five o’clock shadow.

Soft as velvet. Humdrum. What else is soft? Marshmallows — and maybe the protagonist has a personality to match. Perhaps try dandelion fluff, a kitten, or a baby’s bath towel.

Create a comparison that suits the context.

“A scrubby beard covered his face to the cheekbones, giving him an air of ruffianism that went oddly with his large weak frame and nervous movements.” ~ George Orwell, 1984

Have you ever encountered an imaginative passage that persisted in your memory long after you finished reading a book? That should be the legacy you want to leave your readers.