Beard options. How to shape a beard the right way 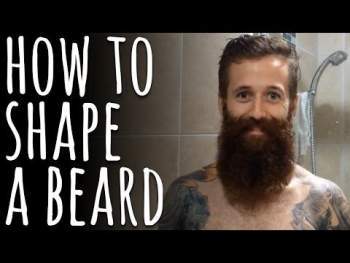 Having good fashion sense and growing a beard might have been considered separate things in the past. Most men who had beards in previous decades were not really conscious with their appearance. They had long beards mostly for the sake of it and not really to appear more stylish. Fast-forward to today’s trends and almost anyone will notice that growing a beard is in vogue. This is matched with a good haircut and the right clothes. There are still men who grow out their facial hair just because they want to. They seem to be fast becoming outnumbered these days by those who are doing it to appear more fashionable.

Men who would like to be more appealing to the opposite sex must consider a few things while growing their beards. This should not be done without any strategy. Simply growing it out is a sure way to accomplish the opposite of what they hope to achieve. He must also remember to maintain it properly. Beards tend to become itchy at the beginning and scratching it can cause the skin to flake. Regularly applying a good moisturizer can prevent this from happening. It can also avoid the creation of white specks that could resemble dandruff. Nothing is more unattractive than an untidy looking patch of facial hair.

Maintenance routines aside, men also need to consider how they would like their beard to appear. While it is true that a man should be left to decide how he would like to shape it, there are still some general guidelines that he must follow. Having a beard alone will not be enough for those who place an importance on being up-to-date with the current trends. Those who actually sport beards do not just let it grow untended. Being mindful of what to do and avoid will go a long way toward successfully accomplishing good-looking facial hair.

Having satisfactory amount of growth comes first and foremost before shaping the beard. Some might get too excited and start to trim without it having achieved enough length. Men should resist the urge to reduce their facial hair if it has not grown beyond a month at least. This is the best time to test how the beard would look like when it is shaped well. Determining where the neckline should be is the initial step toward establishing a nicely formed beard.

Facial hair should complement a man’s appearance and not make it look unnatural. Properly framing it can begin horizontally by shaving anything below the Adam’s apple. This is vital in leaving enough growth to create a continuous flow from the jawline leading towards the area where the head meets the neck. Some make the mistake of thinking that they should shave beginning from their jaw area downwards. This is a common misconception of first time beard growers. It something to be avoided because it makes the head look pinched off from the rest of the neck. Having determined the neckline, the next thing to do is to shape the beard vertically. Finding a line on either side of the face starting from behind the sideburns going down until it meets the neckline is the accepted standard when shaping a beard. This is further made to appear more natural when the corners where the lines meet are rounded out. These are some basic points that would help achieve a neater and more fashionable appearance.

Growing a beard is not limited to what has been discussed here. There are so many different styles yet to consider. This is just to provide a fundamental view of how it should be shaped when it is initially grown. A man’s beard should always be guided by neatness, cleanliness and having good definition. Any other style could build off this solid foundation to suit what is most appealing to the bearer.

There are no comments for this post "How to shape a beard the right way". Be the first to comment...