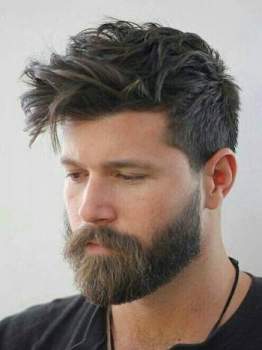 A man’s beard is an extension of his personality. That’s why it’s important to grow—and groom—a style that matches your state of mind. Beard cuts and styles.

If you're itching to try a new persona, check out our list of popular styles being worn out there by the millions of men with beards for inspiration.

This look is for those men who go with the flow, but also control the rapids. The Wise Sensei is a man who chooses his own destiny and is always confident in where he’s headed. A beard style like this is perfect for anyone who’s caring but never overbearing. If you’re thoughtful, spiritual, and always find your friends coming to you for advice, you might want to give this long yet impeccably groomed style a go. It will take time to grow, but luckily you’re the patient type. Pair this beard with slicked back hair, a bun, or even something a bit messy; somehow the Sensei style makes everything come together in harmony.

Somewhere down the line the word hipster earned a negative connotation, but that doesn’t faze you. Y ou embrace it. Who cares what anybody else thinks; you look good, your beard looks good, and you feel good too. This beard is fully grown but well kept, a little old school and a little new school. You know who you are, and you know your place in the world—not just in line at Starbucks. Not for the immature, this beard style is distinguished, and its sophistication says, “Yeah, I’m thinking about grad school.” You can pair the hipster with a swooping undercut, classic men's cut, or a center part. The modern hipster is approachable, and your clean cut, carefully styled beard stands out without being standoffish.

The Captain is a man who can weather any storm, and it doesn’t need to be nautical. The captain is a leader, but also an essential teammate. He’s always there to boost morale; it’s almost like charisma grows out of his chin. Whether he’s manning his post or he’s down on deck lifting up his fellow crew member, the Captain is ready for just about anything. But don’t let his big personality fool you, his heart is double the size. He feels for his friends, and somehow always knows exactly what to say to make anyone feel better. This beard seems to go with just about any hairstyle. The Captain has bigger things to think about.

Remember Chuck Norris jokes? They were a thing for a reason. Chuck Norris is the everyman — more like Chuck Norris is every man rolled into one. He’s an American martial artist, a legendary actor, film producer, father, screenwriter, and an Air Force veteran. Somehow, this rugged, close cropped, ready-for-action beard is infused with his energy, and that means it takes a powerful man to wear it. So, if you decide this is the beard for you, just be ready for what it brings with it: a lineage of no-holds-barred toughness. We think you can handle it. For best results, wear this beard with a feathered swoop like Chuck himself, or a full blown, modern mullet and let the chase scenes commence. But don’t say we didn’t warn you.

Cocktails? You’re not only buying, you’re hosting and crafting. You’re the modern renaissance man. Somehow you always have a new skill up your sleeve, and it never fails to impress. You’re intelligent, cunning, and oh so charming. This beard is perfect for any man who enjoys the finer things in life, or has the code name 007. The Gentleman beard is distinguished but fresh, intelligent but never condescending, and strict but always fair. Pair this beard with a sharp comb over, and consider wearing glasses.

“As long as it’s not in my way, it’s not a problem.” The Mountain Man isn’t overly concerned with his beard, it’s really just something that happens to grow out of his face. This is a man who isn’t concerned at all about what others think of him, he’s entirely comfortable in his own skin. The Mountain Man would rather live off the land than be bothered to shave just because his boss told him too; he’s not stubborn, he’s headstrong. This forest of facial hair goes well with anything — wild or tame.

The Middleman sports a goatee. He’s easy going and always super casual. This is a man who is never 100% committed to anything. It’s not a bad thing, it just means he’s flexible. He’s never distracted by the polar ends of philosophies and mantras, just like his facial hair he’s pretty middle-of-the-road. The Middleman will go anywhere and try anything; he’s open to everything. This look goes great with slicked back hair or a hard part.

The Gunslinger is like the Captain when it comes to charisma, but the Gunslinger is a lone wolf. He’s confident in himself and doesn’t really need any help from anyone. You might find this man cruising on his custom bike, or tearing up the streets in his vintage hot rod. Typically tattooed and a sharp dresser to boot, the man rocking well-kept muttonchops in 2019 makes retro style look cutting edge.

I know what you’re thinking. Mr. Clean? Isn’t he clean shaven? Of course that Mr. Clean is, but this Mr. Clean is named for his refinement. Mr. Clean strives for perfection in whatever he does, and his grooming routine is no exception. This is a man who schedules out his day down to the minute, and never gets distracted. Sometimes it might seem like Mr. Clean is in his own world, but really he’s just planning out his next move. He’s well educated and equally articulate. This perfectly shaped, maintained beard style goes perfect with a crew cut or a mid fade — as long as it’s manageable.

The Inventor does what others won’t. He’s always looking for a solution to every problem, and more often than not he finds one. Likely an artist, The Inventor knows his way around both a guitar and a paintbrush. His facial hair is high maintenance, and he might be as well. If he isn’t occupied by something, he will quickly hop to the next idea. The Inventor is certainly a one of a kind. This classic handlebar mustache and trimmed, styled beard can be equally dressy or messy, depending on what stage of development the Inventor's next project's in.

There are no comments for this post "The Modern Man’s Beard Style Guide - Choosing The Right Type of Beard". Be the first to comment...