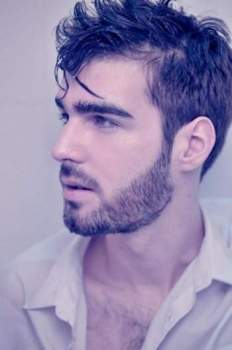 In the same way you can experiment with different haircuts, you can also try different beard styles today. Depending on how well or how fast you can grow a beard, you can sport a full forest of facial hair or a fine-looking stubble. As long as you’re ready to deal with the upkeep, leave some scruff on your face. Here are the classic beard (and mustache) styles to switch up your look this year. Mens trimmed beard styles.

Nothing says classic like a Chevron mustache, a style that is equal parts suburban dad and American hipster. Think of Tom Selleck, Joaquin Phoenix in Her, and Mahatma Gandhi, all sporting this full tuft of hair on their upper lips. The Chevron is also one of the easiest styles to grow and maintain. A regular trim and some beard butter spell the difference between stylish and sleazy. Tip: Grow a full beard before shaving most of it off to achieve the best ‘stache.

Recommended for: Men with longer (oval and rectangular) face shapes

The Balbo appears slightly rugged, but when trimmed, does not look unkempt. The casual-looking beard style, introduced during the Second World War, was named after one of Mussolini’s henchmen, Italo Balbo. Today, Robert Downey Jr. seems to be the poster boy for the look. Which may explain its rise in popularity. Unlike the Van Dyke beard, the Balbo has a blunter end, almost like a boxed beard with no sideburns. The mustache, however, is “floating,” meaning it’s detached from the lower facial hair.

Recommended for: Guys with round faces or narrow chins or those who want a slightly tousled appearance.

As the textbook definition of facial hair, the full beard sets the standard for many beard styles. But it can be difficult for those who do not have the capability to grow a full beard. If you find yourself blessed in the genetics department and don’t mind the maintenance, give this a try. Depending on the speed of your hair growth, achieving a full forest of facial hair can take between four to eight weeks. After that, it’s time to take out the clipper to shape and define the neckline.

Recommended for: Men who have the ability to grow a full beard and those who don’t mind using grooming products regularly

The short boxed beard has the silhouette of a full beard, but is trimmed and sculpted much closer to the face, lending its wearers a neat and professional appearance. It’s for this reason that it is the beard of choice by many nine-to-fivers, who need to adhere to stricter dress codes. Regular trimming and the application of beard oil make this look sharper and polished. For a more carefree look, simply trim less often.

Recommended for: Round faces; those working in corporate environments; executives who want to exude authority

The handlebar mustache is vintage, bold, and regal, and that's why it's not a surprise why many men want to grow its highly coveted “handlebars,” those long ends that are styled and curved upwards.

To grow a classic handlebar, do not trim your whiskers—no matter how tempting it may be. Using a beard comb, comb the mustache and create a part in the middle in order to train the hairs to grow in opposite directions. When it is long enough, apply beard pomade or wax, twisting the hairs up with your fingers. Alternatively, you can curl the mustach around a pen just like in the movies.

Recommended for: Fans of the vintage look; oval and rectangular faces

Once synonymous with looking unkempt, the three-day stubble is now attached to pretty boys. And with good reason: The designer stubble is a popular beard style among Hollywood celebrities and athletes, such as Lionel Messi and David Beckham. Not that it should matter, but research has also shown that women are most attracted to the stubble than other styles of facial hair.

Unlike other beard types, men with uneven or patchy hair growth fare well with the three-day stubble. To maintain this slightly unshaven look, adjust the clipper to your desired short length and also clean up the edges.

Recommended for: Guys trying to lose the baby face; men with uneven facial hair growth; those who can’t quite commit to a fuller beard yet

Growing a beard may seem like the most natural thing in the world, but proper grooming and maintenance are what make the difference. When you spot a beard you like on a celebrity such as, say, Jason Momoa, chances are that the beard is groomed.

A few quick tips: For a fuller-looking beard with some shine and without the flakes, be sure to wash it every day with its own shampoo and conditioner. Also, arm yourself with a beard comb to detangle knots, beard oil to restore lost shine, and beard balm to style beard in place.

There are no comments for this post "The Esquire Guide to Classic Beard Styles for Men". Be the first to comment...