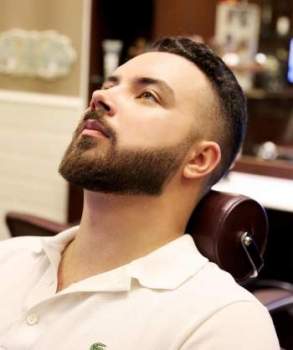 A feline subject reacts to a photograph of a man with a full dark semicircular beard.

Cats were exposed to photographs of bearded men. The beards were of various sizes, shapes, and styles. The cats' responses were recorded and analyzed.

Findings of Prior Investigators

Norquist (1988) performed a series of experiments in which cats were exposed to photographs of Robert Bork[1] (not pictured here), a man whose beard is confined largely to the underside of the jaw. After viewing the Bork photograph, 26% of the cats exhibited paralysis of the legs and body, including the neck. An additional 31% of the cats exposed to the Bork photograph showed other types of severe neurological and/or pulmocardial distress and/or exhibited extremely violent behavior. Because of this, we did not include a photograph of this type of bearded man in our study.

Five photographs were used in the study. The photographs, reproduced here, display a range of different types of bearded men. (As noted above, one type of bearded man was, however, excluded from use in this study.)

The test subjects were female cats, all between the ages of four and six. 214 cats participated in the study. Three cats died during the study, due to causes unrelated to the bearded men. Fifteen cats gave birth while viewing the photographs.[2]

While each cat was viewing the photographs, it was held by a laboratory assistant. To ensure that the cats were not influenced by stroking or other unconscious cues from the assistant, the assistant was anesthetized prior to each session. The cats' reactions were assessed for changes in pulse rate, respiration, eye dilation, fur shed rate, and qualitative behavior.

Cats do not like men with long beards, especially long dark beards.

Cats are indifferent to men with shorter beards.

Cats are confused and/or disturbed by men with beards that are incomplete (e.g., Bork) and to a lesser degree by men whose beards have missing parts (e.g., Crafts).

These interpretations are not categorical. They are subject to several obvious qualifications. The most notable are listed below.

Qualification A. This study excluded photographs of men with beards confined largely to the underside of the jaw (see above discussion of Robert Bork). While data are available from studies conducted by other investigators, those studies made use of a different methodology than the one we used in our study. We are therefore hesitant to interpret our findings in light of the "Bork" findings, or vice versa.

Qualification B. This study was conducted with photographs of bearded men. In a future study we intend to investigate feline responses to animate bearded men. A large number of factors might produce significantly different results in the two studies. In particular, there has been speculation that bearded men produce pheromones which could have a significant effect on cats.[3]

The author wishes to thank The MIT Museum Collection for allowing us to use photographs from its Bearded Men Collection and for generously granting permission to reproduce the photographs as part of this research report. Special thanks to Sally Beddow for assistance in selecting appropriate photographs (the Collection includes more than 71,000 photographs of bearded men) and to Warren Seamans and Kathy Thurston. Special thanks also to Lisa Yane for coordinating the scheduling, travel and housing arrangements for the feline subjects and for obtaining medical clearances in connection with anesthetizing the research assistant.

Bork was a nominee to the United States Supreme Court. Because of Bork's distinctive beard, his photograph has been used in reaction studies with dogs, rats, and planaria (flatworms) and in bombardment studies with pigeons.

We excluded all data pertaining to the fifteen cats who gave birth while viewing the photographs. The reproducibility of the GAVE BIRTH/DID NOT GIVE BIRTH data will be addressed in a separate, future study.

Photographs do not, of course, produce pheromones, but they do emanate airborne scents derived from chemicals used in the photo developing process. Our study with animate bearded men will employ a strategy to eliminate this imbalance: before being shown to the cats, each bearded man will be immersed in a photochemical bath.

NOTE: After this report was published, the authors continued their research.

There are no comments for this post "HotAIR - Feline Reactions to Bearded Men". Be the first to comment...