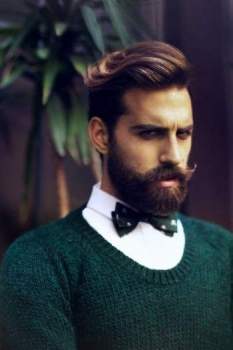 The Viking beard is an intimidating one. It is not just a beard but a statement portraying strength. If you do plan to go in for a Viking beard make sure that you have the physique and the body to carry it off.

The original purpose of a Viking beard was to keep them warm in the bitter cold weather. Eventually it became a style statement and now people want a Viking beard because it makes them look tough, rough and strong.

The Vikings originated in the Scandinavian countries of Sweden Norway and Denmark. They were great warriors, invaders and built ships that made them win wars. The Vikings are associated with being large, dirty and burly. This is actually a myth since they were averagely heighted humans who kept good hygiene. This can be proven by the remains of various tools that were found in places where the Vikings are known to have lived. There were remains of combs and toothpicks that were found at many places which go on to prove that they kept a good hygiene.

The Vikings are known to have had long hair and that is true. They had long hair and long beards and liked to maintain these. When they had to go for war though, they would tie their hair and beards up in braids and other types of ponytails.

The Vikings had long full beards and during war they would sometimes even braid their beards up, so that they do not come in the way hinder activity of the soldiers.

Growing a Viking beard can be tricky. It requires a lot of patience and precision. It takes a lot of time for the beard to grow out properly because a Viking bead is inherently long and the growth of the beard will depend on your general growth rate of hair. to get the perfect Viking beard, follow the steps below:

Pick your style: the most important thing to do before you can start to style your beard is to pick a style that you think will suit you the best. There are many options that are available. You can try the Old Dutch style if you want to try a old and classic look. Other than this you could also try the ducktail style, this way the chin can be left bare.

Let it grow: the next step is to let the beard grow. Give it enough time for it to grow properly. Keep trimming it from time to time since this helps growth. It will typically take about 7 to 13 weeks for you to grow your desired Viking beard.

Healthy diet: a healthy diet is also important to ensure that you get the right nutrients that will aid hair growth and will result in the speedy growth of your hair. Avoid fatty foods and increase the content of iron in your daily diet. This will keep your skin healthy and healthy skin will result in healthy hair growth.

Take good care of your beard: once your beard has started to grow, it is time to start shaping and grooming it properly. When the Vikings were alive they did not believe in grooming the beard. Now with advancement there are easier ways to do it and there are better ways to groom it, hence you should wash it, clean it and groom it from time to time. You can do the following:

Take care of the skin on the face. If the skin is healthy, healthy hair will grow on it and fast.

Beard oil helps aid growth and should be applied at least twice every week.

Trimming the beard from time to time is important to help it grow properly.

It may seem that it is illogical to trim a beard that you wish to grow long enough to braid but it is important to remember that till the time you do not trim your beard into shape from time to time, then the desired beard can be very hard to attain.

Especially if you are trying to grow a beard as long as the Vikings then constant grooming is a must to maintain shape and health of the beard.

Trimming the beard makes it neat and tidy. Although, one should be careful about the fact that a wet beard will be different than a dried beard. Sometimes after trimming a wet beard, when it dries out the length may differ and this may result in it not looking exactly how you desired it to look.

Sometimes you may prefer to trim a wet beard, because it is softer and easier, but make sure that you have the end result after dried up hair in mind.

Buying a good quality grooming kit is a great idea if you wish to maintain a Viking style of beard.

this look is the most common Viking beard style. Just like a Viking the beard is also wild and busy. It is also a big and full beard. this beard starts from the sideburns and is long on the chin. The sides and the hair on the cheek are kept shorter.

this is known as the smart Viking look because, the Vikings historically had long hair, and when they went into battle they would keep a short beard and tie their long hair into a braid. They were smart so as to prevent hair on the head and that on the beard hindering their activities at war.

this is the perfect beard for you if you are an outdoors person. In this the end of the beard becomes pointy gradually as it tapers down. This beard is shaped in the shape of a ‘V’. It is a trendy and smart beard style and one of the more practical beard styles out there.

in this your beard is mostly square-ish and mostly looks like a big block of the same colour. The length of the beard should be about equal all through out to get this beard style right.

the Viking’s beard was historically bushy and large. In this particular style the beard is full and long. There is a moustache which is also long and lies gracefully upon the full grown bushy beard. The beard is connected with the side burns and looks classy and stunning.

just like the Vikings used to tie their hair before they went to war, some Vikings who had extremely long beards tied them into one single beard as well. This would keep their beard in place and take care of the activities war.

some Vikings who had long beards but not long enough to be put in a braid would tie them into a little pony under their chin. This would make them look fierce and scary and suited their physique and personality of being invaders and looters.

another Viking beard style that you could probably try if you are extremely brave is to make two beards out of the entire beard. Then just put two rubber-bands on it, just like a school girl would at the back of her head.

this Viking look is unique and difficult to maintain. In this the beard reaches till the waist. There are higher chances of the beard getting dirty and getting tangled into things. Other than that if you are bold and patient enough to grow a beard this long. Go for it.

this beard is neither too long nor to short. It is not tied up but let open. This beard reaches the upper part of the chest. This kind of beard requires constant grooming to grow perfectly. It can be accompanied with a long moustache which sits on top the beard. This is a classic Viking look.

There are no comments for this post "10 Best Viking Beard Styles: How to Grow and Style? - AtoZ Hairstyles". Be the first to comment...