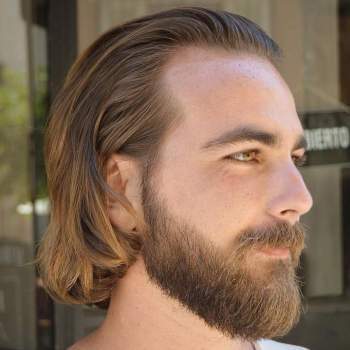 Chin fluff has been an object of fascination for men and their admirers for centuries – if not, since the human race began. There's just something about beards. They seem to say so much about the wearer - their tastes, their values and simply the kind of person they are. So it's no surprise that we remain, and will probably always be fascinated by beard styles.

And so we fast-forward to today, when the beard is once again the epitome of cool and one of the principle ways in which men - even those who are barely on nodding terms with the neighborhood hipsters - express their style. With so many beard styles now possible, including combinations of facial hair, it's difficult to deny the beard's continued relevance.

Sure enough, then, if you would like to learn how to grow a beard, you have plenty of style options. With variety famously being the spice of life, a Full Beard gives you more than enough tastes to sample. Depending on how you grow and trim it, your own Full Beard can look anything from classic to weird. Giant beard styles are intrepid, while medium and small ones are bold and cool.

Our rundown of the different beard styles

Are you ready to experiment with the different beard styles out there, or take on a whole new look? Assuming you can grow enough chin fur to play around with, and don’t mind being stared at as you walk down the street, here are some of the beard styles that you might like to try:

This is the traditional way of wearing a Full Beard. Your sideburns, mustache and beard combine to form an all-in-one display of masculinity. By shaving your upper cheeks and neck and trimming the rest, you define the shape and keep the whole thing tidy. A classic beard look.

The Short Boxed Beard might be one of the best all-round beard styles - showing a certain class and restraint, this is the beard that you can wear to work each day without causing much of a fuss. You won't look like a full-on Neanderthal, but this beard still radiates a certain timelessly rugged look.

You do need to regularly shave the hair that grows below and around your actual beard in addition to doing some trimming every now and then, but the results will make all of that effort more than worthwhile. As it works with your natural beard shape, a Short Boxed Beard will probably suit you irrespective of the shape of your face.

The accessory of choice for rock stars or extreme creatives, this is one of those beard styles that deserves to be worn with a confident gaze. Just remember to style your Long Beard, otherwise before you know it, it’s turned white, reached your knees, and people are calling you Gandalf.

Wondering how to grow a beard that's a little on the longer side? Here's our handy cut-out-and-keep guide: first, grow it and secondly, maintain it. Alright, so the process is a little more complicated than that, not least the need to regularly trim the sides and use the appropriate beard grooming products. Yes, that's right, such things do exist.

Don't underestimate the importance of your lifestyle in encouraging the longer beard styles to grow more quickly - regular exercise and a Paleo diet can both make a big positive difference. Sugar will achieve much the opposite effect. Resist trimming your long beard until it reaches the desired length, as long as it doesn't become too shaggy in the meantime.

Want a truly different look? Pirate Jack Sparrow has made the French Fork beard possibly the coolest of all beard styles once more. And if you´re wondering about the name, it´s because French forks originally only had two prongs. As Jack would know, of course.

If you are one of the approximately six people in the world who are unfamiliar with Pirates of the Caribbean, the French Fork beard is still easy to pick out from other beard styles, thanks to the hair that extends past the chin before splitting down the middle into two segments - or 'prongs'.

The French Fork beard may have once been considered too extravagant and Satanic-looking for most people's tastes, but Jack Sparrow has done much to change that and highlight this beard's perhaps oft-overlooked artfulness. It is a Full Beard style that well deserves its return to fashion.

Rounded at the sides and perfectly pointed at the end, this is one of the harder beard styles to achieve, but it looks great when combined with short hair. It isn't the most common of beard styles, but then, with two months of growth required to achieve it, that might not be too big a surprise.

The Stiletto beard is most often recognised by the central point at which the wearer's chin hair concludes, but it's easy to underestimate the work that goes into creating this style - such as the two deep 'U' shapes that you will also need to trim under your mouth in order to draw the eyes downwards.

You may need some gel to shape your beard correctly into a kind of ducktail shape. You’ll know you’ve got it right when old ladies start throwing bread. Use oil to keep your Stiletto beard nice and soft, and trim it regularly to make sure it stays in shape. Tada! What you end up with is surely a beard style to rival all others.

Mostly worn by hyper-literate guys, this Full Beard is worn square and without a mustache. Sometimes the top of the chin is left bare too. This more old school beard style, connected by sideburns and typically flaring outwards at the bottom, is popular with the Amish, who speak Pennsylvanian Dutch – actually a dialect of German.

Downsides? You might be mistaken for a lumberjack. Unless you are one, of course... in which case, as you were. If you want to ward off such accusations, pair it with a more modern - but nonetheless complementary - hairstyle and pay plenty of attention to grooming.

Definitely one of the more time-honoured beard styles, the rugged masculinity of the Old Dutch beard has nonetheless persisted through the current generation of more understated beards. It has even made a fair few appearances on the catwalk as of late, so you might even be bang on trend with this one.

“It’s a beard, Jim, but not as we know it.” On the face of it (geddit??), the Klingon beard is proof that watching too much Star Trek can play havoc with your facial hair choices. But could there be benefits to wearing face-fluff named after a ficticious race of aliens?

Well, you might be lucky enough to get chatting to a hot lady Trekkie at the bar. But more than that, the Klingon beard is one of those beard styles that achieves a certain cool through its weirdness. Not many men can really pull off a Klingon beard, but those who do can expect turned heads.

To create a Klingon beard, grow a full beard before trimming it neatly. Then, shave off the mustache on your upper lip without interefering with where the mustache and beard connect. Finally, be dazzled by the end result. You don't even necessarily need to be a Star Trek fan to love this most unique of beard styles.

One of the coolest beard styles out there today, this is a short, round-bottomed beard named after the composer who wore it whilst writing some of his best operas. You should wear your Verdi beard with slightly shaven cheeks to show off the interesting mustache.

Indeed, the mustache - which is separate from the beard - is a vital detail. Not only must it never grow more than 1.5cm beyond the corners of your mouth, but you must also keep it immaculately groomed. Violate any of these rules, and you will be laughed out of the next performance of La Traviata. Well, probably.

Just as important as the technical aspects of growing and maintaining a Verdi beard are the interests of the kind of person who wears one. Some beard styles may be better for going out on the pull, but if you're more one for discussing the finer points of Il Trovatore or Rigoletto in your favourite historic pub, you really ought to don a Verdi beard.

Is it real? Can I pull it? Not if you want any presents this Christmas. Yep, some people really do deliberately grow their beards every year to resemble the legendary bringer of presents and 'ho hos' himself, Father Christmas. They might do it for commercial gain, or they may instead be petty criminals wanting to get down people's chimneys without anyone suspecting their true motives.

It's a good rule of thumb to already be old enough to have the white hair, and don't expect too many dates, given a Santa beard's ability to increase your apparent age by another couple of decades. Mind you, such sacrifice might be worth it to see the looks of delight on the faces of the local children every December.

If you are seriously considering this beard of all beard styles, start phoning around shopping malls for grotto opportunities. After all, let's face it... there's almost no reason to grow a Santa beard, unless you do a pretty mean 'Ho, ho, ho' or have literally exhausted all other beard styles that ever existed... ever.

There are no comments for this post "Beard styles: the options for your beard, Philips". Be the first to comment...