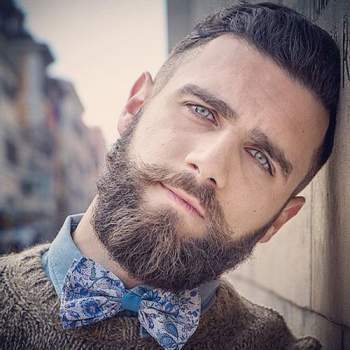 As part of the “six weeks of style” celebration to recognize the Foundation for the National Archives’ partnership with DC Fashion Week, we are showcasing fashion-related records from our holdings. This week’s fashion theme is Classy Women (and Men) of the 19th Century.

The 1860s was unquestionably one of the most turbulent decades in our nation’s history. The tension between the North and South states over issues like slavery, states’ rights, and economic disparity had been simmering for nearly half a century. In 1861, the conflict reached a boiling point as the Southern states seceded from the Union and the country engaged in the Civil War.

Despite their numerous ideological, political, and social differences, the North and South certainly had one thing in common: a flair for facial hair.

After the failure of many liberal revolutions in Europe in the late 1840s, beards quickly lost their association with radicalism. In fact, from the mid- to late 19th century, hairiness became synonymous with masculinity, dignity, and power.

Men of varying political and social statuses started to embrace all sorts of fascinating facial hair styles: long, short, scruffy, orderly, whiskers, no whiskers—you name it, they grew it. Some of the most prominent Civil War military leaders on both the Union and Confederate sides are exemplary models of the so-called beard movement.

If you are not familiar with Union General Ambrose Burnside and his success at the Siege of Knoxville, perhaps you have heard of a facial hair phenomenon known as the sideburns.

This term is a play on Burnside’s last name; the general was infamous for sporting thick sideburns connected to his mustache and worn with an unbearded chin. “Sideburns” most likely resulted from the fact that these patches of hair were worn on either side of the face.

Another lesser known Union general, Christopher C. Augur, was a West Point graduate who played an active role in the campaigns of the western frontier against Native American tribes in the Pacific Northwest prior to the Civil War. Although he was wounded in the Battle of Cedar Mountain, he was appointed major general by President Lincoln and commanded a division during the siege of Port Hudson.

He also wore some wacky whiskers!

It was not just the members of the Northern army who embraced the beard—Confederate Army General J.E.B. Stuart of Virginia sported some serious facial hair. Stuart was also a West Point graduate, and he was a part of the U.S. Army brigade that captured John Brown in the raid of Harpers became famous for his role as the battleground commander during the Battle of Gettysburg.

Not even the 16th President of the United States could escape the facial hair frenzy.

Abraham Lincoln has become an internationally renowned historical figure for a plethora of reasons—preserving the Union after the bloodiest war in our nation’s history, the abolition of slavery and the Emancipation Proclamation, his political astuteness, and of course, his distinctive facial hair.

Lincoln popularized what became known as the chin curtain beard, a style where hair is grown along the jaw line and completely covers the chin.

Despite what state they came from or which side they fought for, prominent Civil War military leaders were serious about their beards.

Examine more “signature styles” and history-making signatures in our current exhibition, “Making Their Mark: Stories Through Signatures,” in the Lawrence F. O’Brien Gallery at the National Archives Building in Washington, DC.

There are no comments for this post "Civil War Fashion: A Facial Hair Frenzy Pieces of History". Be the first to comment...