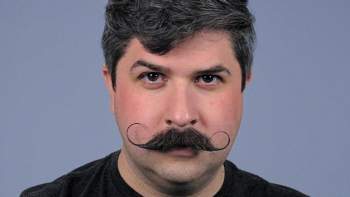 While la moustache is customary for Movember, some men prefer to grow out their beards entirely. Others like to shave their facial fur into different styles – the goatee, the Klingon, the Fu Manchu, the Van Dyke, the Mutton Chops. If you’ve got the hair and a steady hand, you can pretty much make any design you’d like. Le monde est à vous (the world is your oyster!)! Facial hair styles how to.

When I studied abroad in Angers as an undergrad, I eventually needed to get a haircut. I think this was probably my first stressful vocab experience that year. I had to look up the word for sideburns, know which guide comb to use for the clippers, and prep for all that small talk at the hair salon. I’ve since gone bald and can do my own hair at home in front of the mirror with some clippers, but once upon a time, that wasn’t possible.

Everything was going well until I explained what I wanted done with my sideburns. I said I wanted mesrouflaquettes trimmed, and lacoiffeuse (hairdresser) looked at me in consternation. Had I used the wrong word? I eventually pointed to them, and she informed me that I had les pattes (feminine) and not les rouflaquettes (feminine). So what’s the difference? Les rouflaquettes are much larger and bushier than what I had going on. Think Elvis and John Lennon, and you’ll see that there’s a difference.

So you’ve got a goatee or a soul patch and want to know how to talk about it in French? Look no further:

Full beards are definitely back in fashion. Whether they’re well-groomed or scraggly, they’re everywhere now (including in your language – check out this post by Tim about beard expressions in French). Since I lost my hair, I’ve kept my beard full. That whole ‘your face looks like a baby without facial hair’ thing is definitely true for me.

Got a round face? A circle beard will fit you perfectly. Shave your cheeks and neck but leave the moustache, the hair on your chin and the hair beside your lips. Pretty easy look to pull off. I have to say – I’ve always heard of this style as a goatee, but all the style guides online say I’m wrong. Turns out a “circle beard” and a goatee are 2 different things. Which brings us to our next words:

If you shave everything off your face except a little tiny bit of hair under your lower lip, you’ve got a soul patch. This guy has a lot of names – flavor saver, douche tag, dork tuft, but whatever you call it, it’s a classic.

This style was named after 17th-century Flemish painter Anthony van Dyck. It’s similar to a circle beard in that there’s a goatee and a moustache, but the rest of the hair is gone. I couldn’t pull this off if my life depended on it.

Named after Italian politician Italo Balbo, the Balbo beard consists of a moustache and a large goatee. The difference between a Van Dyke and Balbo is that the Van Dyke’s goatee is generally longer, but the Balbo goatee goes further up the jaw line. It’s also called l’ancre because of its resemblance to an anchor.

There are no comments for this post "Happy Movember! Facial Hair Styles in French, French Language Blog". Be the first to comment...