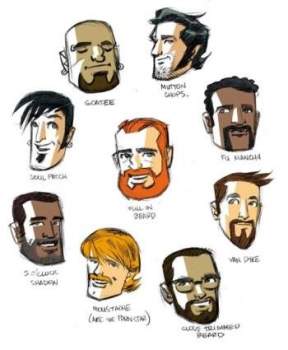 A beard is the collection of hair that grows on the chin, upper lip, cheeks and neck of human beings and some non-human animals. In humans, usually only pubescent or adult males are able to grow beards. Various types of beard.

Over the course of history, men with facial hair have been ascribed various attributes such as wisdom, sexual virility, masculinity, or a higher status; however, beards may also be perceived to be associated with a lack of general cleanliness and a loss of refinement, particularly in modern times.

And so now we arrive at Mawson station 2013, having just read a few excerpts from wiki.

With a contingent of 15 red blooded males, facial hair, along with that on our heads has been allowed to live life freely. Having said this there are a few exceptions of kempt-ness and even within the world of Wookies, hair length, style, and neatness is still very much a personal and cultural choice. In other words should you wish to let yourself go, Antarctica is the place.

Throughout my life I have been very reluctant to grow a beard, even though the cost of shaving every few days has limited my holiday duration and destination choices over the years. I have never enjoyed the itch that comes with anything past a 5 o’clock shadow and until recently thought I would never experience the natural insulation against the cold.

That is until I decided to make August a no shave month.

So before begining the daily regime of not shaving, I first thought it wise to do a little research. I dare anybody out there to Google beards and then try to read all of the literature found. Astonishing!! So my research found that beards have been around in one form or another since Adam was a pup.

Beards have either been in vogue or not, tolerated or not and found sexy... or not. Over the centuries beards have been allowed to flourish under social and military laws allowing those who can grow them, well, a feeling of fulfillment. But having said this also too have beards been outlawed and frowned upon.

The beard develops during puberty. Beard growth is linked to stimulation of hair follicles in the area by dihydrotestosterone, which continues to affect beard growth after puberty. Hair follicles from different areas vary in what hormones they are stimulated or inhibited by; dihydrotestostorone also promotes balding (so a bald guy with a beard is the epitome of testosterone?...I’m well on my way). Dihydrotestosterone is produced from testosterone, the levels of which vary with season; thus beards grow faster in summer. How fast the beard grows is also genetic.

So it is again that the social movement towards beard tolerance is once again upon us. I am a big believer in freedoms of expression especially when it comes to fashion and facial hair. So I say go for it, and as for myself, let’s just call this a little experiment.

Full — downward flowing beard with either styled or integrated moustache

Old Dutch — A large, long beard, connected by sideburns, that flares outward in width at the bottom, without a mustache

Sideburns — hair grown from the temples down the cheeks toward the jawline. Worn by Isaac Asimov and Carlos Menem

Jawline Beard — A beard that is grown from the chin along the jawline. Chinstrap, chin curtain and brett are all variations of a jawline beard with distinctions being chin coverage and side-burn length

Chin curtain — similar to the chinstrap beard but covers the entire chin, also called a Lincoln, Shenandoah, or spade

Brett — similar to the chin curtain beard, but does not connect to the sideburns

Neckbeard (a.k.a. Neard) — similar to the Chinstrap, but with the chin and jawline shaven, leaving hair to grow only on the neck. While never as popular as other beard styles, a few noted historical figures have worn this type of beard, such as Nero, Horace Greeley, William Empson, Moses Mendelssohn and Richard Wagner.

Circle beard — commonly mistaken for the goatee or the Tae Han Kim, the circle beard is a small chin beard that connects around the mouth to a moustache. Also called a doorknocker.

Goatee — A tuft of hair grown on the chin, sometimes resembling a billy goat's

Junco — A goatee that extends upward and connects to the corners of the mouth but does not include a mustache, like the circle beard

Meg — A goatee that extends upward and connects to the mustache, this word is commonly used in the south east of Ireland

Van Dyke — a goatee accompanied by a moustache

Monkey Tail — a Van Dyke as viewed from one side, and a Lincoln plus moustache as viewed from the other, giving the impression that a monkey's tail stretches from an ear down to the chin and around one's mouth

Hollywoodian — a beard with integrated mustache that is worn on the lower part of the chin and jaw area, without connecting sideburns

Royale — a narrow pointed beard extending from the chin. The style was popular in France during the period of the Second Empire, from which it gets its alternative name, the imperial or impériale

Hulihee — clean-shaven chin with fat chops connected at the moustache

Friendly Mutton Chops — long muttonchop type sideburns connected to a mustache, but with a shaved chin

Stashburns or the Lemmy — sideburns that drop down the jaw but jut upwards across the mustache, leaving the chin exposed. Similar to "Friendly Mutton Chops." Often found in southern and southwestern American culture.

Latest news from the stations

There are no comments for this post "Flowing beards and stunted stubble Australian Antarctic Division". Be the first to comment...