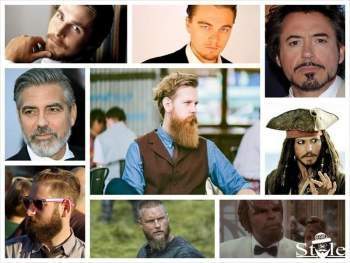 Typically affiliated with Abraham Lincoln, the Amish or indeed Leprechauns, chin beards have a deep and varied history. Chin beards are often associated to spirituality, symbolism and intellectuals. In 1860, an 11-year-old girl, Grace Bedell, sent a letter to Republican presidential nominee, Abraham Lincoln.

She suggested that his face looked too thin and would look “a great deal better” if he grew a beard. If he did, in exchange she would persuade her four brothers to vote for him. Furthermore, she continued, “all the ladies like whiskers and they would tease their husbands to vote for you and then you would be president.”

However, the chin beard can be traced back even further to Pan, the Ancient Greek god of the wild, shepherds and flocks. In Islam, the Prophet proclaimed, “trim the moustache and let the beard grow” to distinguish themselves from other faiths. Whilst many Sunni Muslims disapprove of shaving the moustache, it’s not forbidden nor uncommon and even permissible among some communities.

Today, the chin beard is mostly seen among older gentleman. However, it is not exclusive to seniors and revised styles are popular with men of younger generations.

Today, the Brett is the most commonplace and popular variety of the chin beard. The origins of its name are unknown yet the name is useful in differentiating it from its older counterparts. A Brett consists of growth that extends down the Sideburns, along the jawline and meets at the chin. What sets it apart from the Chin Strap is the presence of a soul-patch. A Brett is typically trimmed short with defined contours. The chin’s hair can be angular with intersections along the soul patch.

It can be achieved with as little as two weeks of beard. However, the best results are achieved after about four weeks to maximise overall hair growth, which is then trimmed down. Brett beards do require prior knowledge of identifying the cheek and necklines.

The cheek line curves below the ears and meets the top of the chin. The neckline is very high. Hair growth is trimmed half an inch (1.25 cm) below the jawline and runs parallel to the cheek line. It widens slightly under the chin to nearly an inch (2.5 cm) of growth to avoid the appearance of a double chin.

Using a razor, reduce the height of the cheek lines to just under an inch above the jawline but leave wide Sideburns. A straight razor will provide the best results with its wide and visible blade length. It is best to remove hair in increments on each side to avoid taking off too much beard.

Once at the desired height, use a razor blade or trimmer to define sloping contours from the Sideburns to the cheek lines.

Remove any growth around the Adam’s apple.

Once defined, shave any remaining hair around the neck and shave the moustache.

Perfectly parallel Bretts are difficult to achieve and it’s recommended that this is undertaken by a specialist. Bretts require regular grooming to avoid be concealed by stubble, which is easier once the counters have been properly defined.

Conversely, some argue that a Brett’s hair growth stops on the corners of the jawline or doesn’t include Sideburns. Whilst this is true in some cases, it’s a very rare occurrence. A “Klingon” variant exists for Sci-Fi enthusiasts, which retains the corners of the moustache extending to just above the lips.

The tradition of the Amish beard predates their arrival in America. In Europe, the Amish and other Mennonites were usually persecuted by the military who commonly wore elaborate moustaches. The Amish, devout pacifists, sought differentiate themselves from the military and so forbid their followers to grow one. Nevertheless, they were encouraged to retain their beards to pay homage to men from the Bible and would grow them even longer after marriage. Furthermore, since the moustache was considered a vain embellishment, the beard was left to grow naturally and untamed.

The tradition endured and is commonplace among the Old Order Amish, which consists of some 2000 local churches. Unlike other members of the of the Chin beard family, the Amish is grown long and naturally. Only the cheek line is shaved otherwise the rest is left entirely untamed. This can result in some impressive beard growth well beyond that of a Yeard or a Bandholz.

The Chinstrap bears a strong resemblance to the Brett. However, it’s history is much longer. Much like the Old Dutch, the Chinstrap was very fashionable during the late-18th to mid-19th Century. It was popular mostly in Europe followed by Russia and Japan. Unlike the Brett, a soul patch is completely absent on the Chinstrap. Furthermore, hair is removed on the top part of the chin to retain a uniform thickness across its entire length.

However, the principles of a modern Chinstrap remain very similar. Both are often kept short and trimmed with defined contours. Whilst the thickness of a Chinstrap is somewhat less than a Brett, both remain relatively similar. Chinstraps can be seen on athletes such as Dwayne Wade and Elvis Andrus as well as British grime artist, Stormzy.

Traditionally referred to as the Shenandoah beard or Chin Curtain, the Old Dutch has a long and passionate history. Often associated with Abraham Lincoln, the Spanish identify it with 1970s Progres Hippie culture as well as writer, Álvaro Pombo.

The Old Dutch is grown long with emphasis added to volume by rounding off the corners and flattening the bottom. It was enormously popular as a noble or intellectual beard in mid-19th Century America who were influenced by the Parisian bohemians. Aside from Lincoln, it is often synonymous with statesmen and generals during the American Civil War such as Edward Bates.

It can be sometimes mistaken for an Amish beard. However, the Old Dutch is kept neat whereas Amish beards are usually natural and untamed for symbolic reasons. Nevertheless, this chin beard style owes its name to the German dialect, Pennsylvanian Dutch, which is still spoken by Old Order Mennonites.

Will A Chin Beard Suit My Face Shape?

Chin style beards can be used to adjust jawline width and sometimes face length depending on how they’re groomed. However, their decline in popularity can be linked to the difficulty in pulling this off without appearing outdated. You may want to double-check which is yours beforehand with our face shape guide.

There are no comments for this post "Chin Beards: Best Guide To Trim Old Dutch, Amish Chinstrap Styles". Be the first to comment...