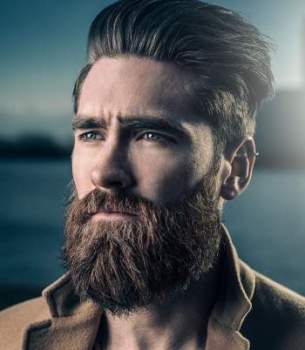 The man bun has skyrocketed in popularity since 2013, so I thought that creating this site would provide the answers to the many questions that many of you must have. I’ve sprinkled this site with my own perspective of the man bun as a barber and as someone who too wears (what is also known as) the bro bun. Hairstyle with beard for men.

I will introduce the man bun to you through the 5 Ws (What, When, Who, Where and Why) and the single H (How):

How to style a man bun hairstyle and which hair products to use?

When was the man bun trend started?

Who started the manbun trend and who wears this type of hairstyle?

Where was the man bun started and where is it most popular?

Why is the man bun hairstyle so popular?

You can go through all the links that I’ve posted to learn more about the man bun and you can also browse the menu links at the top of this page for further information. After all, this is just an introduction; there’s a lot more to the man bun than just this!

What is a man bun?

A man bun is a type of long hairstyle that involves the tying of one’s hair into a single bun to be placed upon the crown area of the head (aka the “vertex”). Other names for the man bun include “bro bun”, “hipster bun”, “mun” or “dude bun”. Likewise, the “man bun” word can be spelled as manbun or man-bun.

Going back to the hairstyle itself, the man bun is, in fact, a very simply hairstyle, but there’s one specific requirement for it: that you have long hair. Depending on whether you want a full bun or a semi bun (i.e. a top knot hairstyle), you will need a minimum hair length to be able to tie your manbun.

On the other, if you want a full bun by using all the hair on your head, the minimum length of your hair should be 10 inches, although, again, I highly recommend that you instead have 12 inches of hair length all across your head.

Why such minimum hair lengths for each type of man bun? Because tying your hair with a lower hair length is not just impossible but also exposes you to a terrible type of hair loss known as traction alopecia!

How to style a man bun hairstyle and which hair products to use?

Don’t worry if the styling of a manbun sounds like rocket science; it really isn’t. As a matter of fact, the styling of the bun is quite intuitive and you will grasp the concept as soon as you grab an elastic band or scrunchie. I’ve published a man bun hairstyle tutorial that will guide you through the steps to tying and styling a man bun as well as how to create the different types of man buns.

With regards to which hair products to use for a man bun, all you truly need is an elastic band (aka “hair tie” or “hair band”) or scrunchie (a softer elastic band). If you want to keep the styling of your man bun as minimal as possible, then just use an elastic band.

If you’re interested in buying hair products for your manbun or for any other hairstyles, then have a look at this excellent list of the best hair products for men which are currently available and which includes all recommended men’s hair products according to each type of hair product. It’s a hair products list that was compiled by the barbers at the popular hairstyles forum called Men’s Hair Forum and which is the only website that I’d recommend if you want to know more about long hair and about the man bun hairstyle.

When was the man bun trend started?

The man bun trend was started in 2013 and it fully took off in 2014 thanks to the hipster culture and the use of the man bun by American and British male celebrities like Jared Leto, Joaquin Phoenix, Harry Styles and Zayn Malik.

One should be careful, however, to discern between what the man bun trend is and what the use of the bun hairstyle by men is. As it is, men have been using bun hairstyles for centuries and the use of buns was common in the Roman Empire (for those lucky enough to have long hair) as well as among Vikings (for whose soldiers had long hair).

Furthermore, the bun as a long hairstyle has been adopted by just about all long-haired men over the centuries as the bun offered a neat and convenient hairstyle when one didn’t feel like having dangling locks. Unlike the ponytail hairstyle, the bun allows for the hair to be grouped into a ball shape that doesn’t allow for any dangling and which is kept at scalp-level. It should be said, however, that, outside of the recent man bun trend, the bun hairstyle was worn low (close to the nape) by men, not high on the vertex as with the man bun trend!

Who started the manbun trend and who wears this type of hairstyle?

The man bun as a trend was started by hipsters. Previous to their taking of the manbun as their flagship hairstyle, hipsters had used the slicked back undercut and the side swept contour as their main representative hairstyles. Tired of these two medium length hairstyles, hipsters decided to grow their hair long and try a hairstyle (i.e. the man bun) that, until then, was reserved for die-hard long haired guys. A common hipster look is the wearing of the man bun with a beard, with the beard being shaggy and unkempt (i.e. a hipster beard).

Man buns have also been worn by non-hipsters alike. Outside the hipster-culture circle, the man bun was popularized by the aforementioned male celebrities and thus guys associated with other urban tribes started to wear manbuns from 2014 onwards. I’m talking of heavy metal dudes, hippies, long-haired guys (who have no urban-tribe affiliation) and even metrosexuals. Ergo, the man bun has become more and more popular and has even become a common sight in hipster-friendly cities like New York, San Francisco, London and Copenhagen.

Lastly, the man bun has slowly but surely been introduced in the African American community and among the hip hop community. Dudes who live by the so-called “playa” lifestyle and who recreate a tough image have too started to wear manbuns, which is quite interesting as this sub-group would have rejected and even laughed at the man bun trend a couple of years ago.

Where was the man bun started and where is it most popular?

The man bun hairstyle was started (as a trend) in New York (particularly in Brooklyn), a city which could be called the hipster capital of the world. The man bun trend soon spread to US hipster-centric cities like San Francisco, Chicago and Seattle. Just as the man bun trend was spreading across the United States, it too started its virus-like spread across Europe and, soon enough, cities like London, Berlin, Copenhagen and Vienna were full of hipster with man buns.

By 2015, the man bun has become a common sight in just about all Western-world cities. Likewise, Asian cities like Tokyo, Osaka, Shanghai, Hong Kong and Mumbai have been saturated with bro buns.

Why is the man bun hairstyle so popular?

With both hipsters and non-hipsters, the man bun is indeed quite the popular hairstyle. There are mainly three reasons for the popularity of the man bun. These are:

The man bun was started as a trend by hipsters who wanted to differentiate themselves from their brethren who wore slicked back undercuts and contour haircuts. Of course, it only took a couple of months for the man bun to become a widespread hairstyle in hipster social circles. Thus, an inherent need to set a trend was a deciding factor for the sky-rocketing popularity of the man bun.

Male celebrities looking to add an edge to their image. Someone who used the man bun purposely to gain even more attention to himself was none other than Jared Leto. The adoption of the man bun by male celebrities soon kicked off the trend among the male-population group aged 16 to 35 in the United States and Europe. This is exactly what happened with the undercut hairstyle in 2011 when Michael Pitt popularized the slicked back undercut as he starred as Jimmy Darmody in Boardwalk Empire.

The man bun is a very-convenient hairstyle for long hair. It leaves no hair dangling and keeps the hair secured in one place. It is also done in seconds, is easy to do and is also an aesthetic hairstyle, so it’s no wonder that so many men have favored the man bun as a must-have hairstyle in their hairstyling toolbox.

So, what are you waiting for?

This website is all about the man bun hairstyle. Browse around, read our popular man bun FAQ tutorial, learn the intricate stuff regarding this manly bun, ask me questions in the commenting sections and take inspiration from the many pictures of man buns in this site. But, above all, grow that hair long and keep rocking that man bun!

There are no comments for this post "Man Bun Hairstyle - Official Site for Manbuns and Long Hair". Be the first to comment...