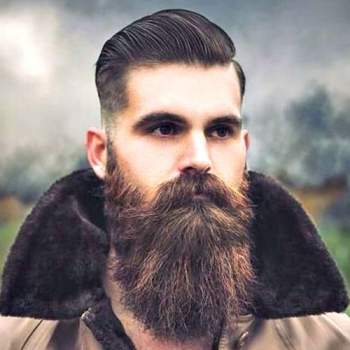 Also known as the Door Knocker, the Circle is a ring-shaped beard formed by the cheeks being shaved. Circle beards are commonly referred to as goatees albeit incorrectly. Up until the 20th Century, goatees were exclusively beards where the hair grew solely on the chin like a Chinstrap beard. However, today the term is generally accepted when referring to circle beards.

Circle beards are defined by the moustache being connected with the chin’s hair and usually feature growth under the lip. This can be difficult to achieve for younger gentleman whose facial hair is still in development. However, they can usually opt for a style closer to the Anchor beard. Nevertheless, it is a popular choice for older men who are looking for a style more refined and groomed than a Full beard.

With their association to cheap fedoras and wallet chains, the Circle beard has often struggled to be regarded as a respected beard style in the 21st Century. Fortunately, the Circle beard is witnessing a rebirth and has begun to overcome this unfair reputation. With ambassadors such as Kanye West, Brad Pitt and Idris Elba, it’s understandable as to why the Door Knocker has come full circle.

Whilst the tamed goatee has its place among the youthful, full and natural circle beards tend to receive higher praise by the wearer’s entourage. Worn and trimmed properly, a full circle beard denotes maturity, wisdom and experience. Furthermore, it focuses attention on the mouth, which may be of particular interest to public speakers. As can be seen on veteran Thespians such as Jeff Bridges and Pierce Brosnan, natural circle beards are an excellent opportunity for showing off grey hairs without appearing unkempt.

Circle beards are particularly versatile beards for sculpting the wearer’s bone structure and facial proportions. The vertical growth that connects the chin and moustache can be grown out. The fuller hair volume on the sides renders the face narrower with thinner, concave cheeks. Furthermore, extra length can be retained on the lower part while the moustache is trimmed shorter. This offers an excellent solution for those seeking to lengthen their face or strengthen a weak chin with beard bulk. They’re also ideal for those with patchy growth on the sides but who want to enjoy the pleasure of having a beard.

Those interested in a Circle beard but are reluctant to try one due to its negative associations can always try the Extended variant where growth is kept along the jawline. The result bears a resemble to the Balbo but retains the hallmarks of a Circle beard with a connected finish.

A natural circle beard can be obtained after around 4 weeks of growth. However, tamed circle styles can be achieved with as little as 2 weeks. Natural circle beards are far more forgiving to those who shave less frequently. Stubble growth can in fact add texture across the cheeks without losing the beard’s form. However, tamed circle beards require frequent touching up in order to retain their definition. As is often the case with beard styles, the best results are usually achieved when first trimmed by an expert to determine the correct contours. The trimming required afterwards will be far easier to undertake after a professional’s touch.

Using a razor, remove the hair on the cheek but leave growth on either sides of the mouth. A straight razor will provide the best results with its wide and visible blade length. It is best to remove hair in steps on each side to avoid taking off too much beard.

Once at 0.5 inches (1.25 cm) from the mouth, define the vertical contours on each side. A trimmer can be used or alternatively, a straight razor held vertically.

Shave up to 1 inch (2.5 cm) above the Adam’s apple. Draw out and oval of growth that connects with the vertical contours.

Once defined, shave any remaining hair around the neck.

Neaten the moustache and soul patch hairlines by trimming or shaving down carefully.

Trim down to desired length.

The enigmatic goatee has a history in film and television for its association with villains. This symbolism between beards and evil stems from the transitional period when Christianity was legalised in the Byzantine Empire. As it became the dominant religion, Pagan imagery was appropriated by scholars and associated with sin. The Greek god, Pan, was often depicted with hooves, horns and a traditional goatee, which today is a Chinstrap beard. In Medieval and Renaissance art, portrayals of Satan grew to incorporate these features until evolving into the sly devil we recognise today.

Consequently, the goatee has long been used to inform that a character is villainous or has even transitioned to evil. For example, Flash Gordon’s Ming the Merciless always sported his evil goatee. Yet, what better way to indicate that Walter White’s transition into Heisenberg or that Kirk encountered an evil mirror Spock?

Fortunately, science has answered that question. According to Dr Derrick Watson and Dr Elisabeth Blagrove of the University of Warwick, goatee features give the face an inverted triangle shape. Their research concluded that inverted triangles cause anxiety and appear threatening compared to the same shape pointing to the side or up. Nevertheless, we cannot ignore the influence of religious symbolism that is deeply woven into western culture and society.

Yet, the goatee’s negative association can have a profoundly positive influence on the wearer. By rendering the face more aggressive, it can also be more impressive and nothing short of badass.

A perfect example of this effect is Avery Brooks as Benjamin Sisko in Star Trek: Deep Space Nine. During the problematic early seasons, the protagonist was clean shaven leaving the character with a warm and friendly appearance. DS9’s fourth season saw the station’s commander with a shaved head and tamed circle beard. By appearing stronger and more imposing, the character immediately assumed his role as an inspiringly authoritative leader.

Will A Circle Beard Suit My Face Shape?

For those not yet familiar with the style, Circle beards are surprisingly versatile. They can be groomed differently to accommodate for the majority of face shapes. Be sure to identify yours among the 7 different face shapes using our identifying guide.

Unfortunately, Triangle face shapes lose out on Circle beards. With their prominent jawline, a Circle beard will likely only emphasise it, which will result in a pear-shaped appearance. Similarly, Diamond face shapes will experience a gaunt result with Circle beards. Although these can indeed soften their features, the bulk it adds contrasts too strongly with their cheeks.

There are no comments for this post "Best Guide To Circle Goatee Beard Styles, Growth Maintenance". Be the first to comment...